So, whilst we were in Dorset last weekend for Camp Bestival, we took the opportunity to have our very own Coastal Adventure.

NB: This post has been created in collaboration with Parkdean Resorts and if you are looking for more inspiration for coastal adventures check out Parkdean Resorts’ coastal blog post.

If you’ve not been before, the Dorset Coast is simply stunning. We explored the coastline around Warmwell Holiday Park, but to be honest the rest of the coast is just as incredible.

Our first stop on our #CoastalAdventure was Weymouth

Weymouth has beautiful golden sandy beaches that are full of deckchairs, and activities for old and young alike. We were all introduced to the beauty of Weymouth during the London 2012 Olympic and Paralympic Games when it provided a backdrop to the sailing events and we have wanted to take the girls since then.

There are your traditional fairground rides up and down the front, together with arcades and fish & chips shops but on a sunny yet blustery morning it was the ice cream that came first.

I had hoped to see some of Weymouth’s infamous Sand Sculpture festival but we just couldn’t seem to get parked in the vicinity.

The lure of too many ways to spend money on fun activities moved us on from Weymouth beach to Chesil Beach.

I’ve wanted to visit Chesil Beach since I read Ian McKewan’s novel a few years ago. There’s now a film too starring Saoirse Ronan which comes out later this year. Chesil beach is certainly an impressive backdrop for any film, it’s so striking.  The beach is 18 miles long and for much of its length it is separated from the mainland by the Fleet Lagoon making it appear like an island.

We arrived at the beach and the girls were delighted to find litter pickers and a couple of plastic bags at the start of the bridge with a sign asking people to collect at least two pieces of litter and then return everything for others to use. The enthusiasm for litter picking was a delight to see, but sadly (for them not the environment clearly) there wasn’t a scrap of litter to be found and believe me they looked hard. Impressive for a beach in the middle of the Summer holidays.

The girls had to satisfy themselves with making stone angels. The beach is made up of pebbles and stones and we’ve taken quite a few home to paint and make into Kindness Rocks!

We didn’t get chance to try it but understand that the bacon and egg pie at the Jailhouse Cafe beside HM Prison The Verne is the perfect way to start any experience of the Chesil. 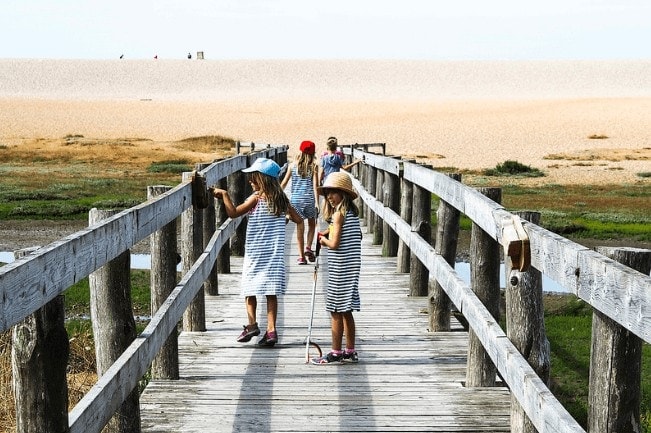 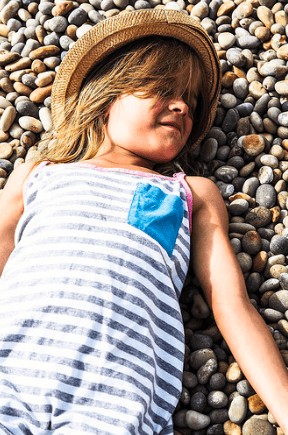 You’ll have to check out Mr Mini Travellers image below for the famous image of Durdle Door, it’s one of Dorset’s most photographed and iconic landmarks.  I was too busy making sure the kids didn’t get too close to the cliff edge to get a proper shot myself.  You can also see the magnificent natural limestone arch in our video towards the bottom of the post.

Durdle Door was formed when the waves eroded the rock and forged a hole through the middle.  Durdle Door is part of the Lulworth Estate and you can access it on foot via a path and steps over the hill from Lulworth Cove or down from the Car Park (charges apply). It takes about ten minutes to wander down.

The car park closes at 10pm in the summer months (between 1st March to 31st October) and 4pm the rest of the year. 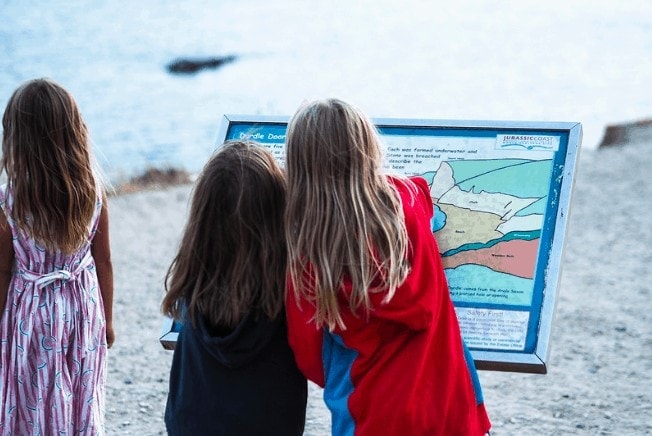 As we were on the Lulworth Estate visiting Durdle Door we decided to visit Lulworth Cove as well. Totally different to Durdle Door, Lulworth Cove is a flat beautiful white pebble beach with wonderful rock pools teeming with sea creatures. Make sure to check out tide times if your kids are wanting to search for crabs and such like, as you don’t want to end up getting caught out by high tides

Kayaking is a popular activity on this peaceful cove and we saw adults and kids splashing about.

You could also make a day of it and park at Lulworth Cove and walk to Durdle Door – take snacks and drinks though especially if with kids as it will take around 30-40 minutes as it’s a 1.3 mile walk.

Parking spaces are limited in Summer months so use public transport or arrive early or late.  You can get the X55 bus which connects the cove to Weymouth, Bovington Tank Museum and Wool train station. Parking is available at Lulworth Cove Visitor Centre.

Even if you decide not to walk to Durdle Door it is worth a short detour on the coastal path for views over Stair Hole. It was incredibly windy when we wandered past for a look so we decided to recreate the photos from our Welsh trip earlier in the year!

Why not check out our video of our Coastal Adventures: