As part of our trip to Chalet Hotel Aiguille Percee in Tignes, with Mark Warner we we were offered free child care for the three girls all day and into the evening. Had we had to pay for this it would have cost £180 per child for the week.  Before we went I did think this was maybe a bit expensive, however now I know the quality of the childcare and the activities provided I think this is excellent value.  In effect it is the same price as nursery at home, but much more fun!

We knew that due to the nature of the holiday, and as I was learning to ski we would use the childcare more than we usually do on holiday but didn’t expect for the girls to love it as much as they did. It was a fabulous addition to our holiday and we can’t thank Mark Warner enough for this perk at Chalet Hotel Aiguille Percée. 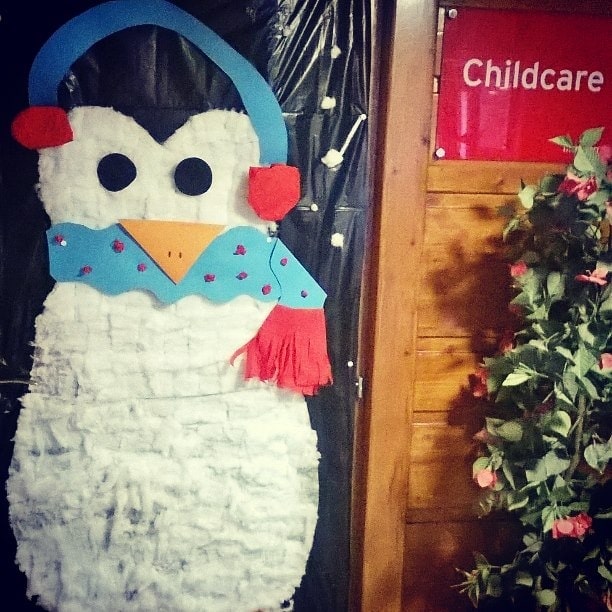 The Snowman room at Chalet Hotel Aiguille Percée where the mini club (ages 3-5) and babies childcare was based, was on the ground floor of the hotel and was a very friendly place to be. It was full of toys, books, games, dolls house, cars etc. There was a list of activities posted on the wall outside the room  so you could see what your children  would be doing every day. You could use this activity plan to decide if to go and pick them up and at what time. It was a mixture of activity and quieter play depending on the time of day.

Jodie and Sam looked after my girls (Jodie was their key worker in nursery speak) and they were both incredibly, patient, kind and funny. The girls loved them. They really made this special week extra special with their enthusiasm and energy.

To give you an idea of the activities they took part in, they made shapes with shaving foam, played with balls and parachutes, went on crepes and hot chocolate trips (additional €5 per child) went to the park, went sledging, got involved in card making, singing, stories, and playing games. They also watched films every other day after lunch to give them a chance to relax. The system was also incredibly flexible, you could sign them in and out throughout the day, or just return at 5.30pm after their tea, whatever suited you. 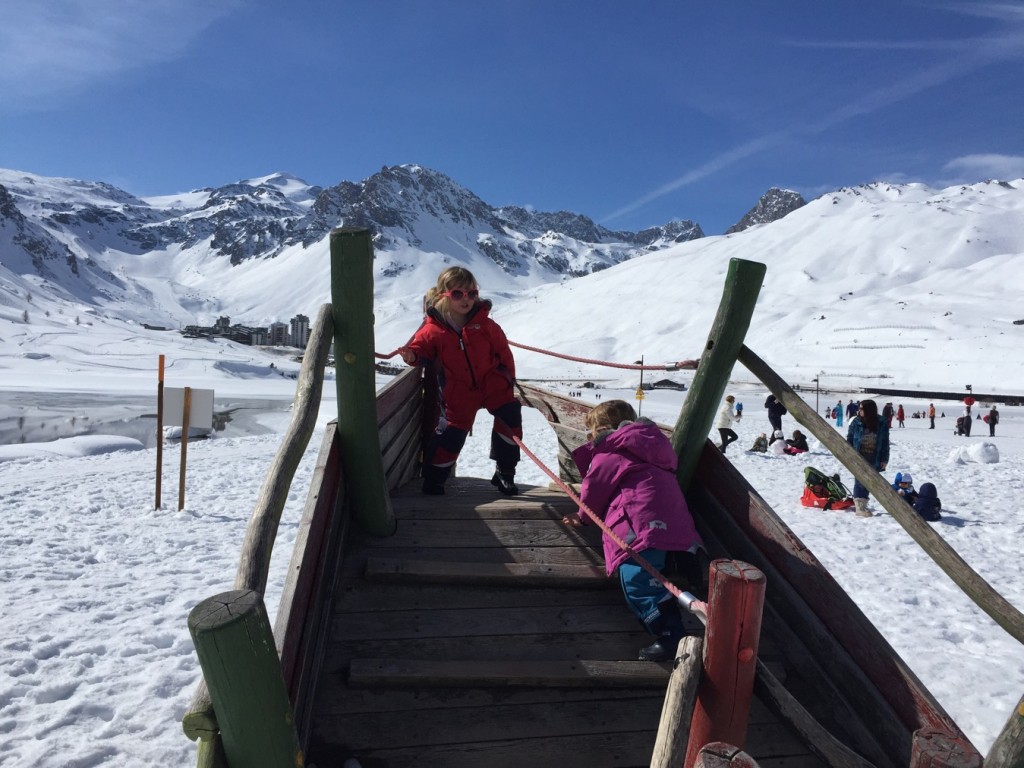 We used this flexibility quite a lot as we used it to take the girls out at different times. Having three little ones on the snow on skis with only two adults is not practical! Particularly when one parent is a ski novice too.  We took the twins out skiing/falling down the hill one morning, I took them sledging another day, and towards the end of the week this flexibility allowed me and my hubby to ski with our eldest, leaving the twins to go out for hot chocolate. The twins definitely thought they got the best deal!! Hot chocolate with Jodie – what could have been better!  Have a look at a little vide of our fun with the girls here. 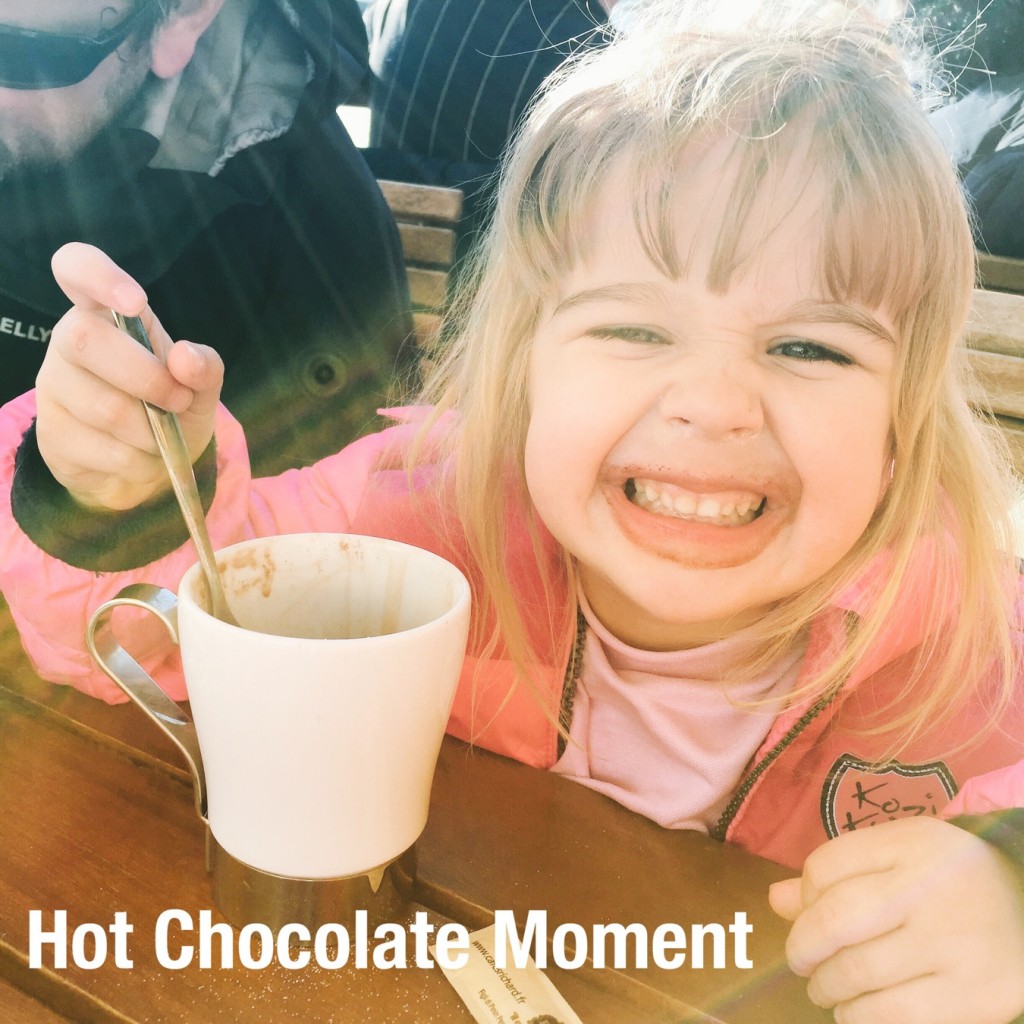 For children over 4 which included Lily, you could drop them off suited and booted for ski school and they would take them over to their classes and collect them afterwards for lunch. This greatly assisted me getting to my ski lessons on time and allowed my hubby to head off to the slopes.  Throughout the week I felt very very comfortable leaving my three girls in their very capable care.

The additional benefit for me, scratch that let’s call it the fabulous part for me, was that Jodie and Sam gave my girls their lunch and tea every day. Meal times are not a favourite time of mine in our house, they never seem to want to eat! So to have someone else give them their meals was a real treat. It was also very good for my three to eat with other children every day (as they aren’t at nursery) and see how well they eat. They also ate much more varied food, as they had to eat different things than they were used to i.e. the pizza wasn’t the same as at home! This is definitely a good thing. 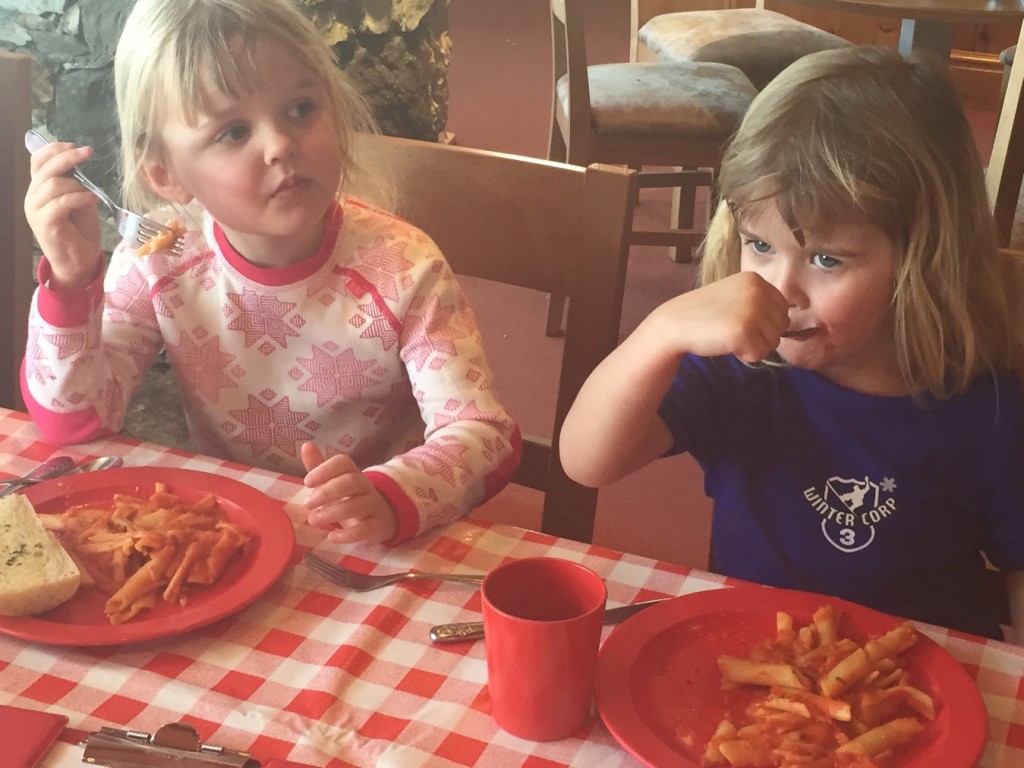 Every evening you could choose their next days lunch and tea from 6 choices on a menu at reception. There was never a day when I couldn’t find something on the menu they would like. Some dishes my children had during the week were fish pie, pizza, pesto pasta, chicken roast dinner, tomato pasta with garlic bread, sweet and sour pork, vegetable curry, spaghetti bolognaise, lasagne, chicken bites with wedges and beans. There was also always a plate with ham, cheese, carrots, cucumber sticks and tomato on for them to choose from.  There was then a daily desert special (crumble, chocolate mousse, jam roly poly) or you could choose a yoghurt or ice cream/sorbet for them.  I’d like to say they ate better than us, but that would be a lie, our food was very good too. Click here.

The only thing that didn’t work perfectly for me was the evening childcare. This stared at 7.30pm and went on until 11pm which is a fantastic service. They start a film at 7.30 which finished around 9 so all the parents had time to eat their evening meal. We had used an evening film club last year in Greece so I hadn’t thought it would be a problem, even though it does mean the girls getting to bed at around 9, two hours after their normal bedtime. What I hadn’t considered was that when the next day the kids are only lazing about it doesn’t necessarily matter if they have a later bedtime, but when they are heading out to ski lessons (which are hard work) they really need to be well rested and they are actually exhausted after a day on the slopes. So we used the film club a couple of times, one night we tried a baby monitor that sort of worked although beeped a lot disturbing others at dinner, and two evenings we ate in our room. The other option would have been to hire a babysitter although I never managed to ask in time to sort this out. Another two years on and this wouldn’t have been an issue at all, two years younger and we could have put them to sleep in their pram/travel cot and again it wouldn’t have been an issue as they would just have slept. I know some ski hotels have a listening service so they have in-built monitors for reception staff to listen too they can then alert you if the kids wake up. It depends on what works for you and I know some families we spoke to loved the film club. Others we met had taken their own video monitors from home and requested a room that was in close range to the restaurant.

At the end of the week following on from the girls ski lessons medal ceremony, the childcare team have their own presentation. They award all the children with a certificate explaining what ‘character’ they have been that week. My three were awarded certificates that truly suited their personality, proving to me, if any proof was needed, that they had completely understood my children. and given them the best week they could. Thank you Mark Warner and all the team at Chalet Hotel Aiguille Percée, we will be back.

NB: We were provided with the childcare courtesy of Mark Warner whilst staying at Chalet Hotel Aiguille Percee. 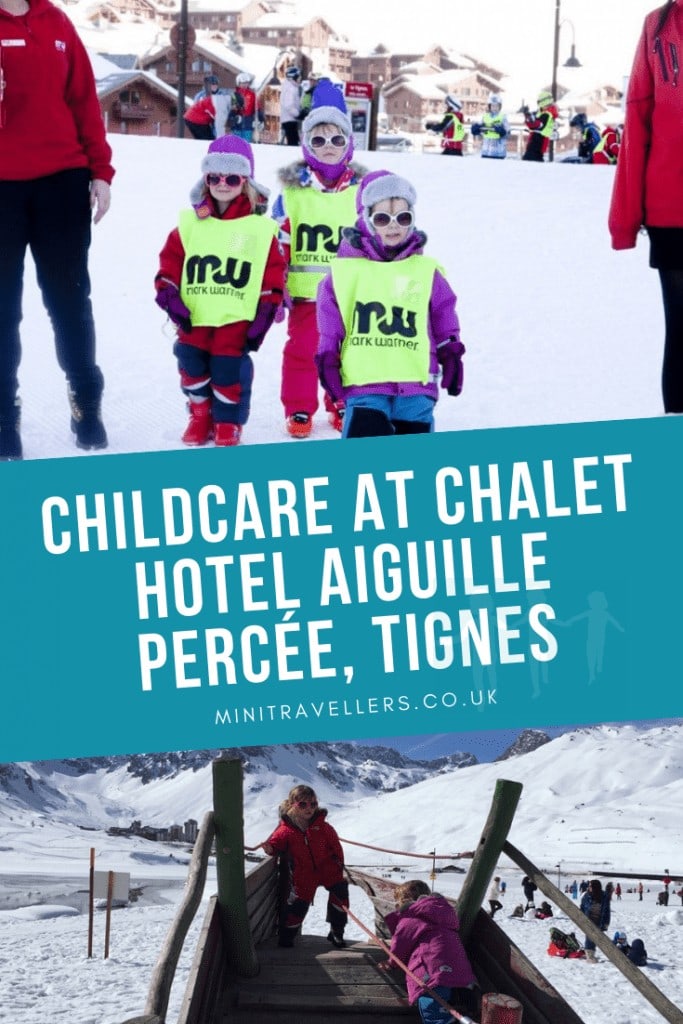 Flexible and quality childcare is hard to find - especially when you are abroad so this sounds like a rare find. I love that picture of your little girl with the hot chocolate - I want one of those!!! #mondayescapes

Sounds like the holiday worked out perfectly for everyone! It must be great to have excellent childcare available. We really need to think about this in future. #mondayescapes

Great to know there are people who are passionate about working with kids. They make parents lives much easier. Seem like the girls had an awesome holiday! #MondayEscapes

This looks fab! I haven't (ever) been skiing and this would be the sort of thing that we would really make me book! I think a skiing trip is in order :)

We're thinking of taking our girls ski-ing next year. This looks fabulous. Kids clubs are so important when on holiday, make life so much easier. Huzzah for finding a great one! #mondayescapes