On Tuesday (during term time) I spent a lovely 3 hours at the Blue Plant Aquarium with my four year old twin girls. We arrived just after 10 and left around 1. This fits in with the time the Blue Planet suggest it will take to tour the Aquarium and see everything they have on offer. I mention this because I’ve seen quite a lot of reviews saying it isn’t a full day out. It isn’t and as long as you know that you will be off to a good start.

I’ll start by saying that if you haven’t been to the Blue Planet before then you really should. Everyone in proximity should go at least once to see the incredible walk through tunnel that feels as though you are under the sea, and one of the largest collections of sharks in Europe. For me (and the girls) this really was an amazing sight. So amazing we did it four times.

We only live about thirty minutes away so I have been to the Blue Planet before with the kids, but to be honest I don’t think we got the most out of it when they are younger than 4. There is however an interesting choice about when to visit, as it isn’t cheap, and if they are 4 (or around the average height of a 4 year old) then they will have to pay to enter. If they are below 90cm in height then they are admitted for free. When you are a family this really changes the price of a visit. Had mine been below 90cm then our days entry would only have been £17 for me. However add on the girls at £12.25 each, plus £3.50 for parking and the total price of the visit would have been £45.

This is where the previous reviews I have read say that it isn’t good value for money. For a visit lasting 2-3 hours they say, the cost of the visit should be significantly less. I have a lot of sympathy for this view (and I need to caveat the next statement by saying that we didn’t pay for tickets to Blue Planet) but seeing what is on offer at the Blue Planet and having some understanding for how much it must cost to run, I understand why the price is so high. What I don’t understand is paying for parking, this really is difficult to stomach when paying so much in entrance fee.

Top Tip: Take your time viewing the exhibits, or if you have younger children go round more than once. I think we actually went round 4 times!

So what did we do? Well we arrived after 10 and spent a good fifteen minutes playing in the entrance hall: 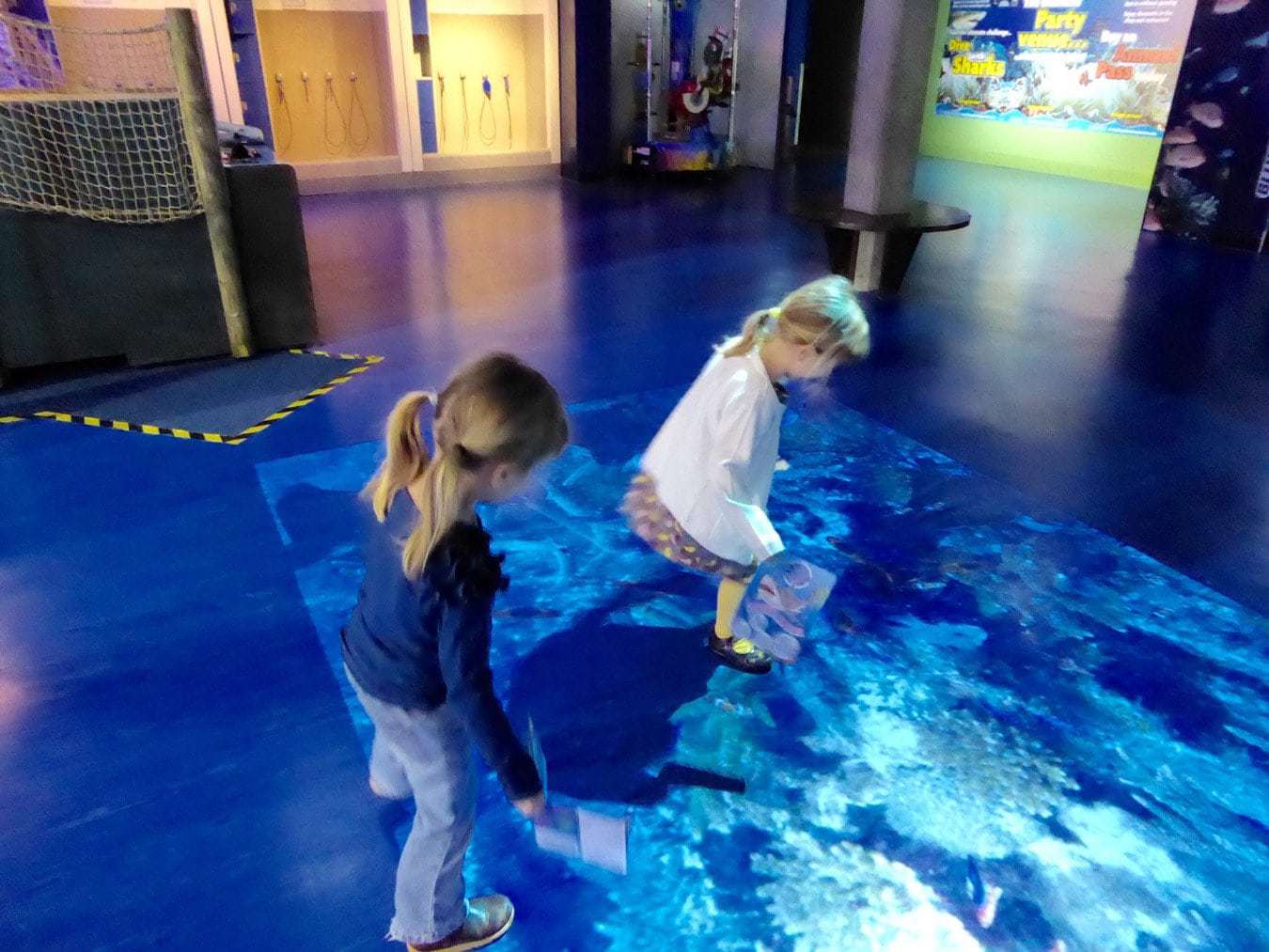 Top Tip:  Arrive around 10.30 on a school day. We arrived pretty much the same time as a huge school group which was a little overwhelming, but once we got in front of them we had a much easier time.

We went round the aquarium really quite quickly the first time as my children always want to see what is next. We stopped a while in the shark theatre but the kids first time round seemed more interested in the peppa pig play toys at the back (I did not put money in). Mine are really good at not asking for money for these as I never say yes, so are happy to play on them without them moving. I think a lot of parents would be much happier if these were removed as having paid quite a lot for entry, you don’t want to spend more. 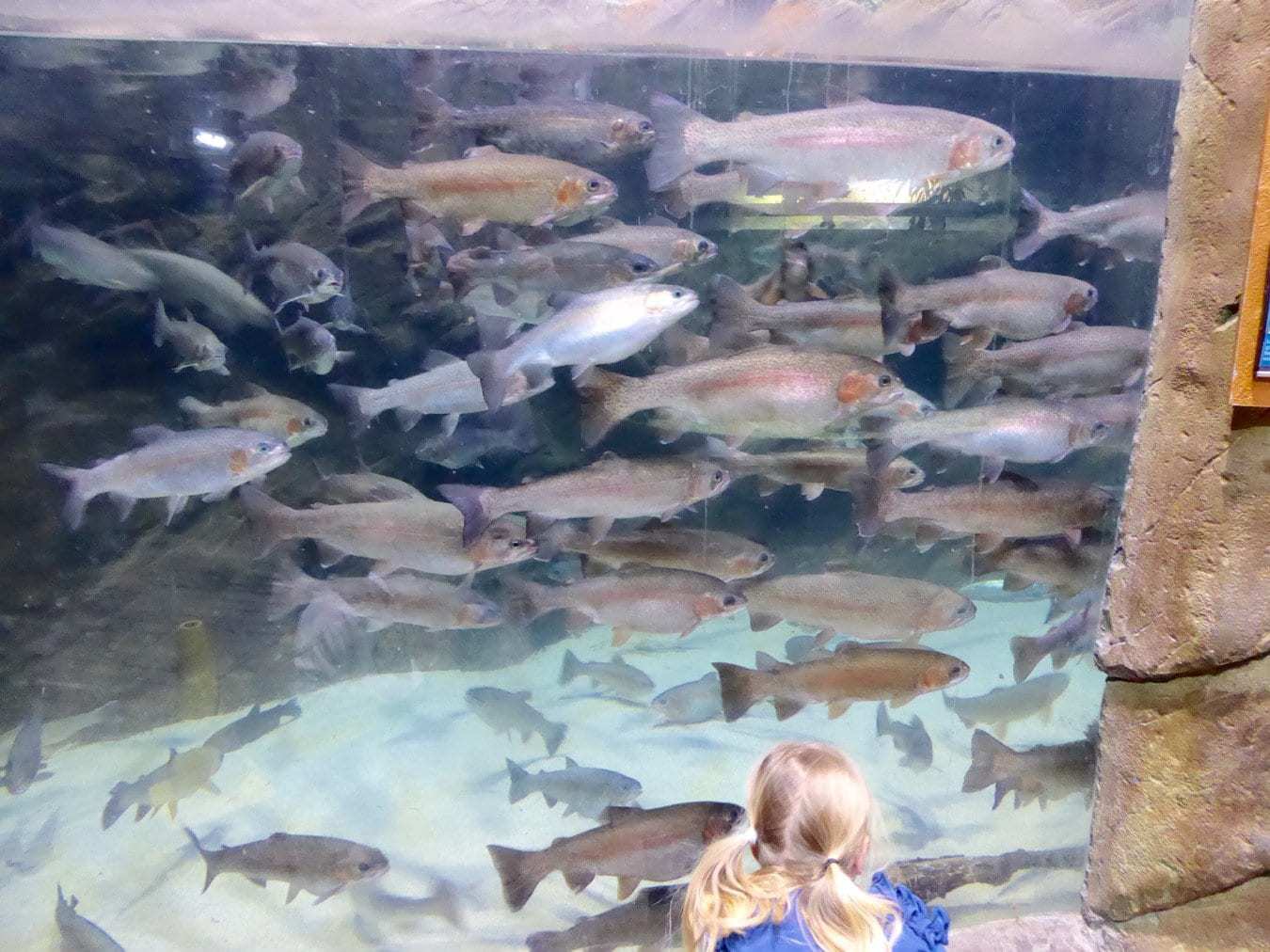 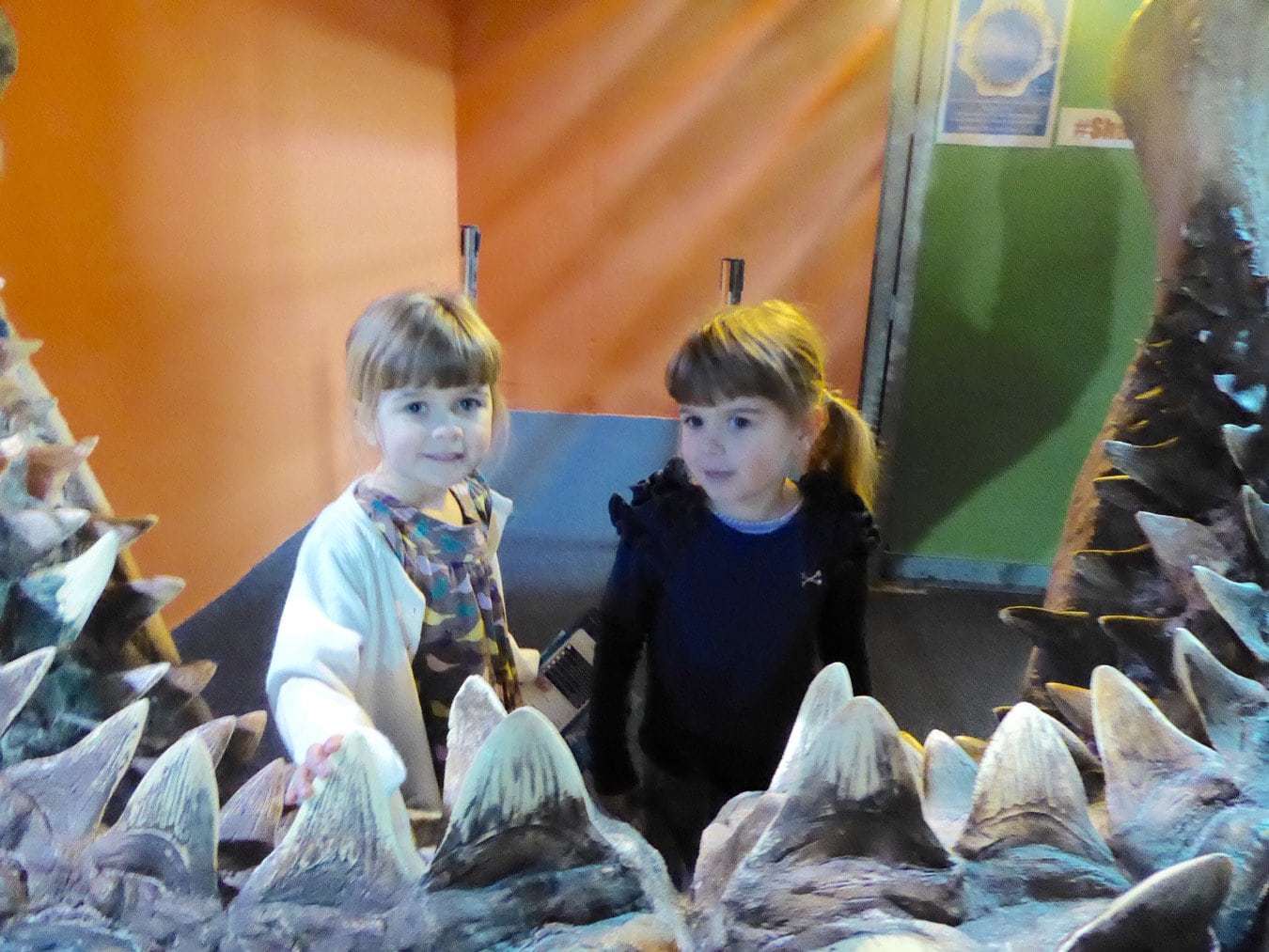 Once we’d completed the first (run) round, it was time for the first talk to start at 11.15. For me the talks are what you need to do to ensure you get the most out of your time at the Blue Planet. If you don’t make sure you see them, you won’t, I don’t think, get value for money.

Our first talk at 11.15 was on crustaceans. The chap giving the talk kept the school children engaged, and whilst his descriptions were a little interesting at times, they largely went over the girls heads. They did understand however that the large crabs were aggressive and a bit stupid, demonstrated by watching them with a razor clam!

The 11.15 talk finished nicely in time for the 11.30 shark theatre talk. We took seats in the top of the theatre (kids request it wasn’t that full) and watched the divers feed the sting rays and the other fish. My two (always starving by this point on a day out) ate their sandwiches whilst watching the show and were really interested by how the divers good breathe in the tank and why they weren’t getting eaten by sharks (who knew sharks weren’t usually that hungry). I for one loved this part of the day, and the food helped keep mine sitting down for the full half hour. 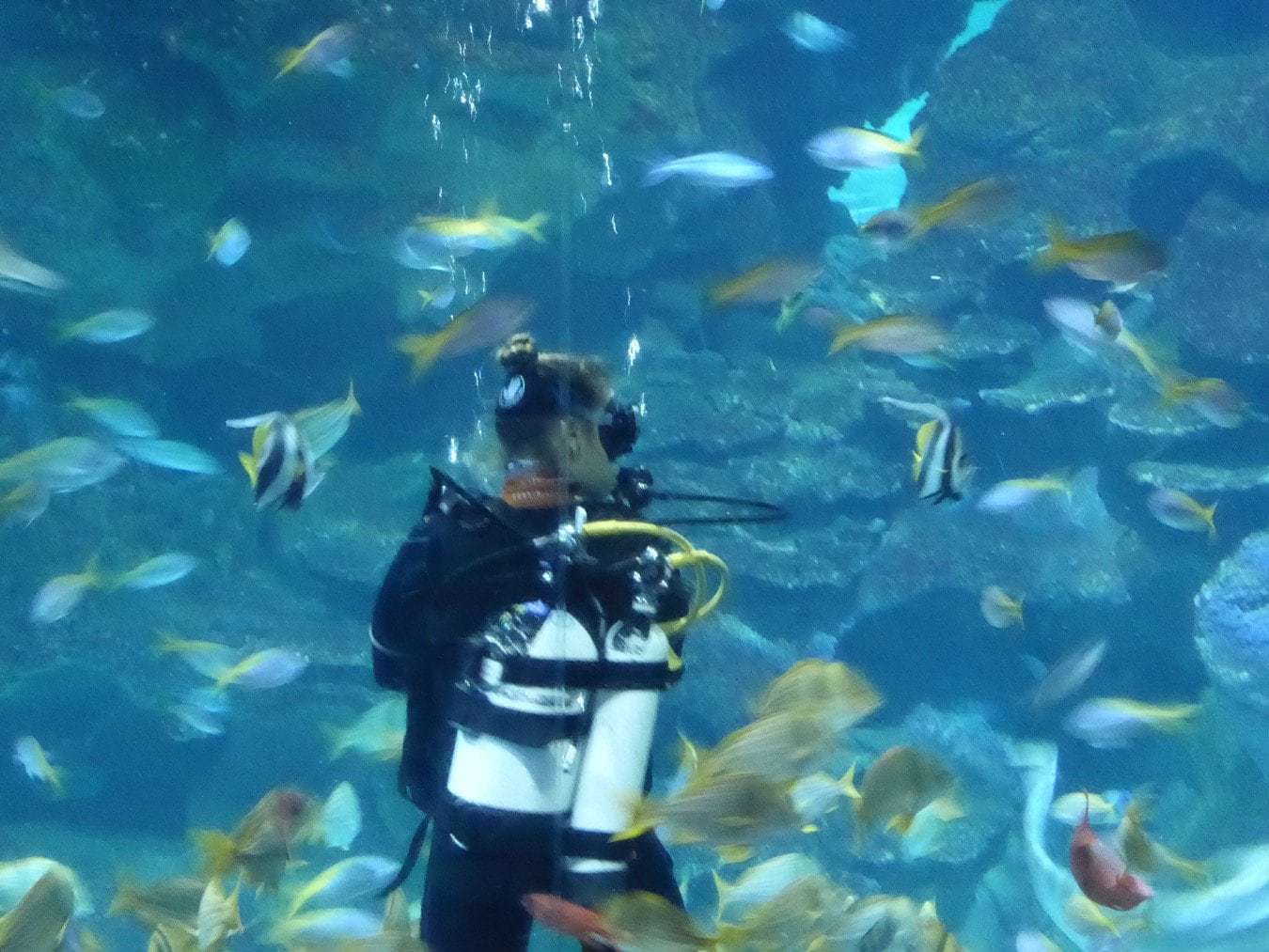 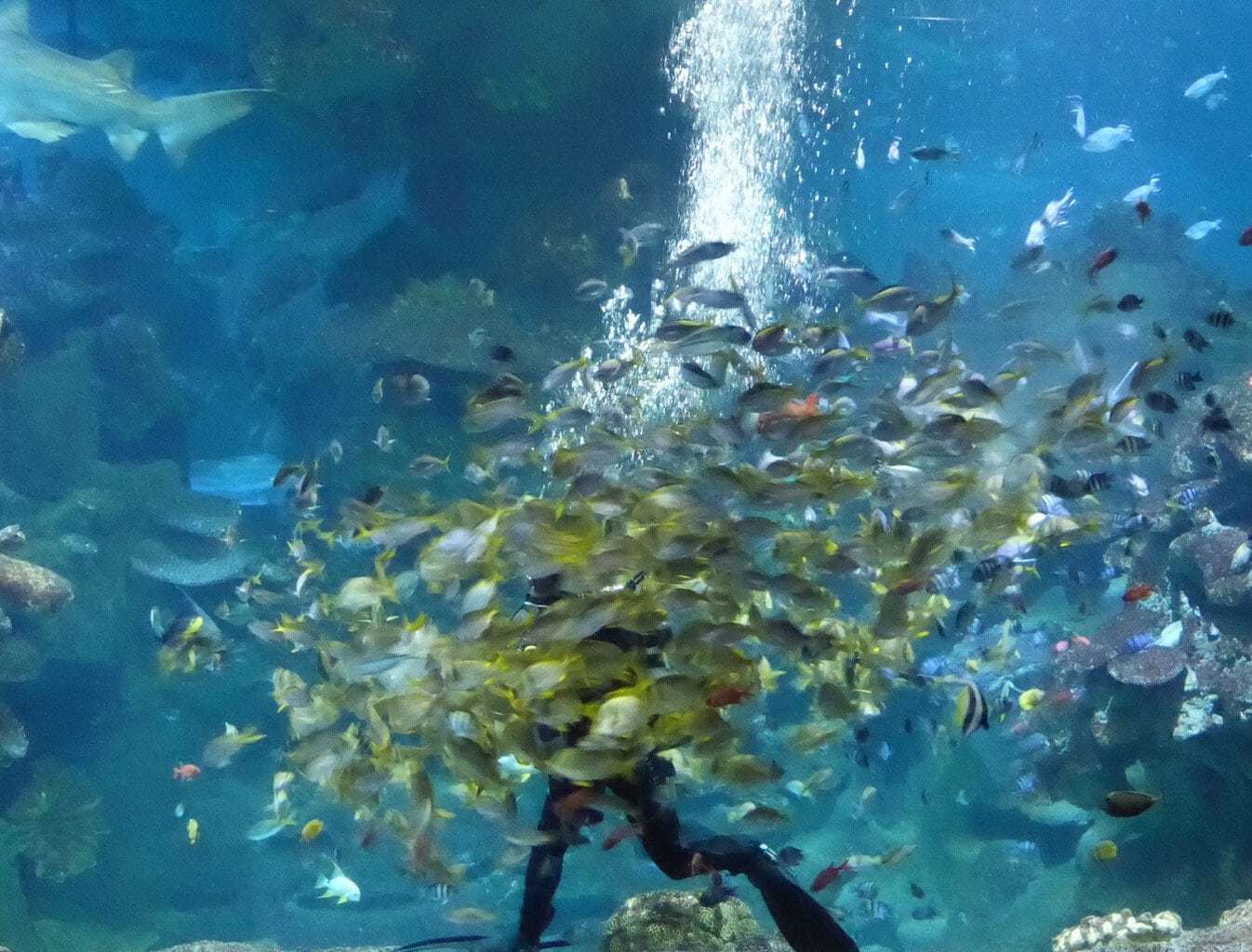 By 12.00 it was time for the Otter Feeding (a relatively new attraction for the Blue Planet) and unfortunately one we didn’t see much of as I’d left the girls coats in the car so we didn’t need to carry them round. I did however notice the large adventure playground outside that on a nicer day would definitely have kept my two busy for at least another half hour/hour. In fact when I got back my neighbour confirmed that her boys (a similar age) had loved that bit when they went. 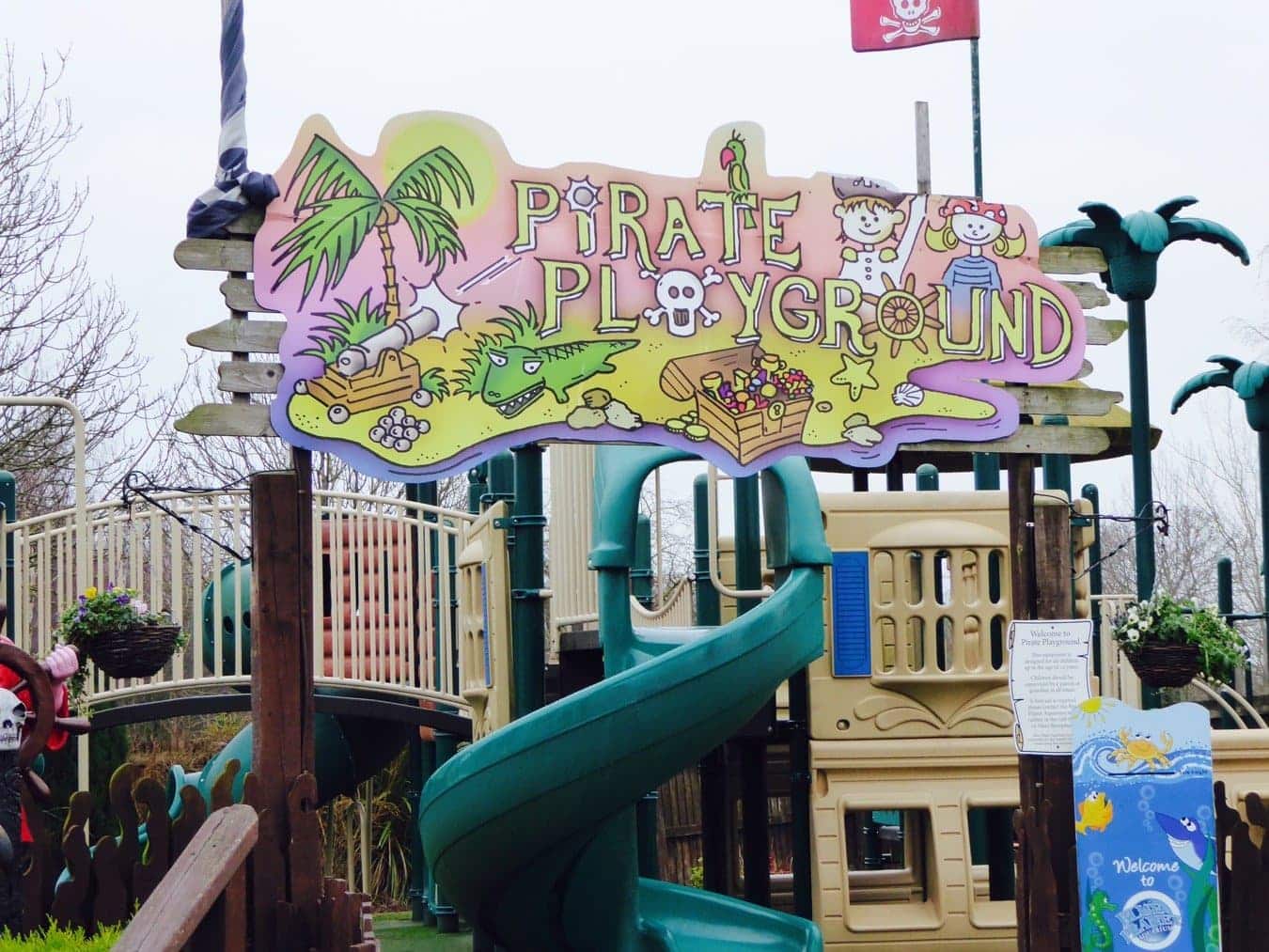 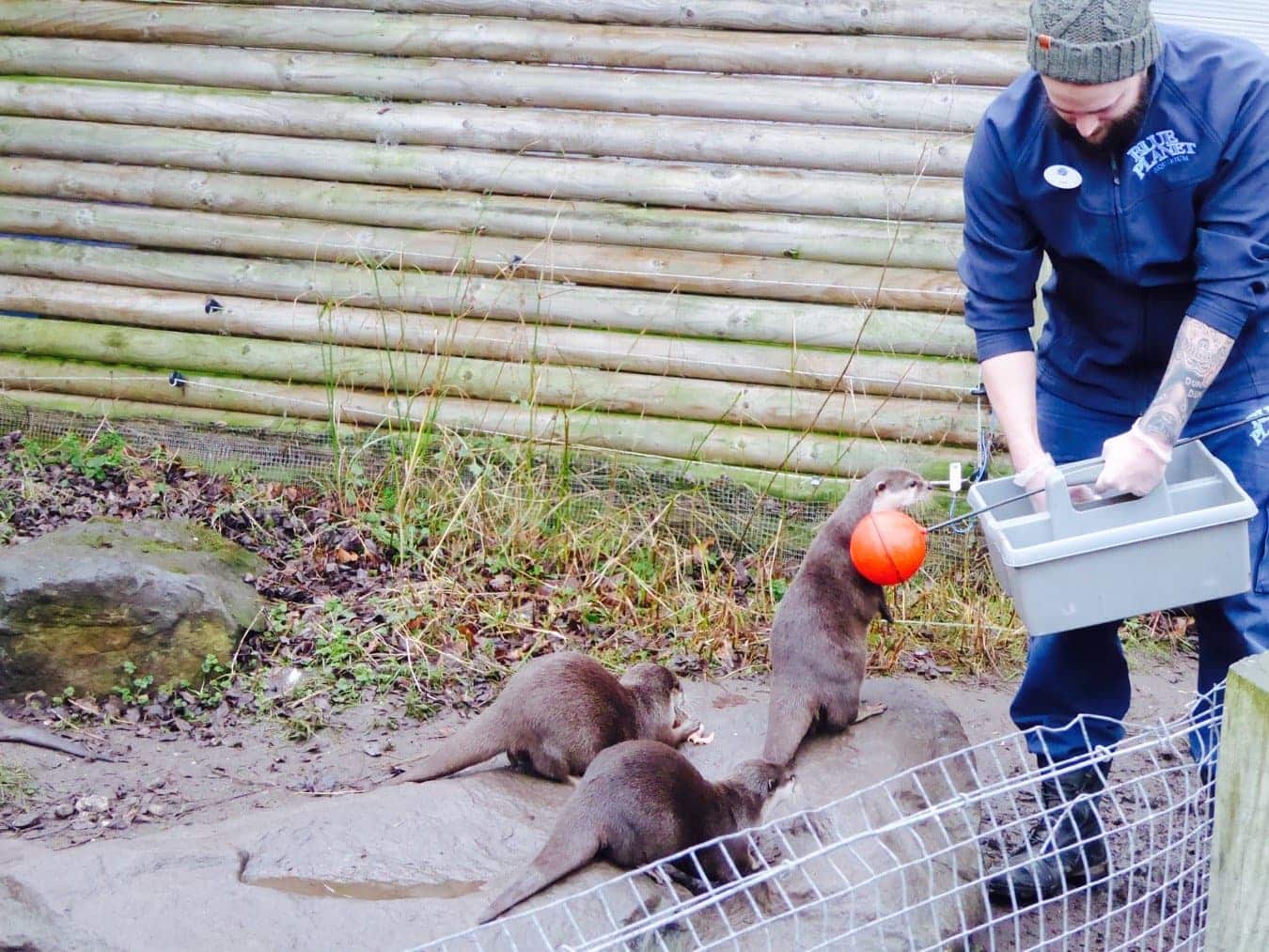 Top Tip: If you are visiting the Blue Planet then make sure you get a feeding schedule and a map as the signage is terrible and you could easily miss the otters and adventure playground as it is out the back of the shop and not signposted (or at least not very well anyway.)

The last talk for us before they started to be repeated was about starfish and under close supervision they can be held. We actually managed to miss most of this talk (I think we were in the large tunnel for the fourth time) but I’m sure it was as good as the others.

The highlight of our trip, and of yours I’m sure if you go, was the underwater tunnel. The magic walkway that encourages you to go at a certain pace will keep people moving when it’s busier but it is also an exciting addition for under 5’s. What pre-schooler doesn’t like a moving walkway. My only criticism of this area is that mine would have loved to keep going back through but you have to finish the tour of the aquarium and head back round. I’m sure there are good reasons for this, but I don’t know what they are. When it is so good, you just want to keep doing it! 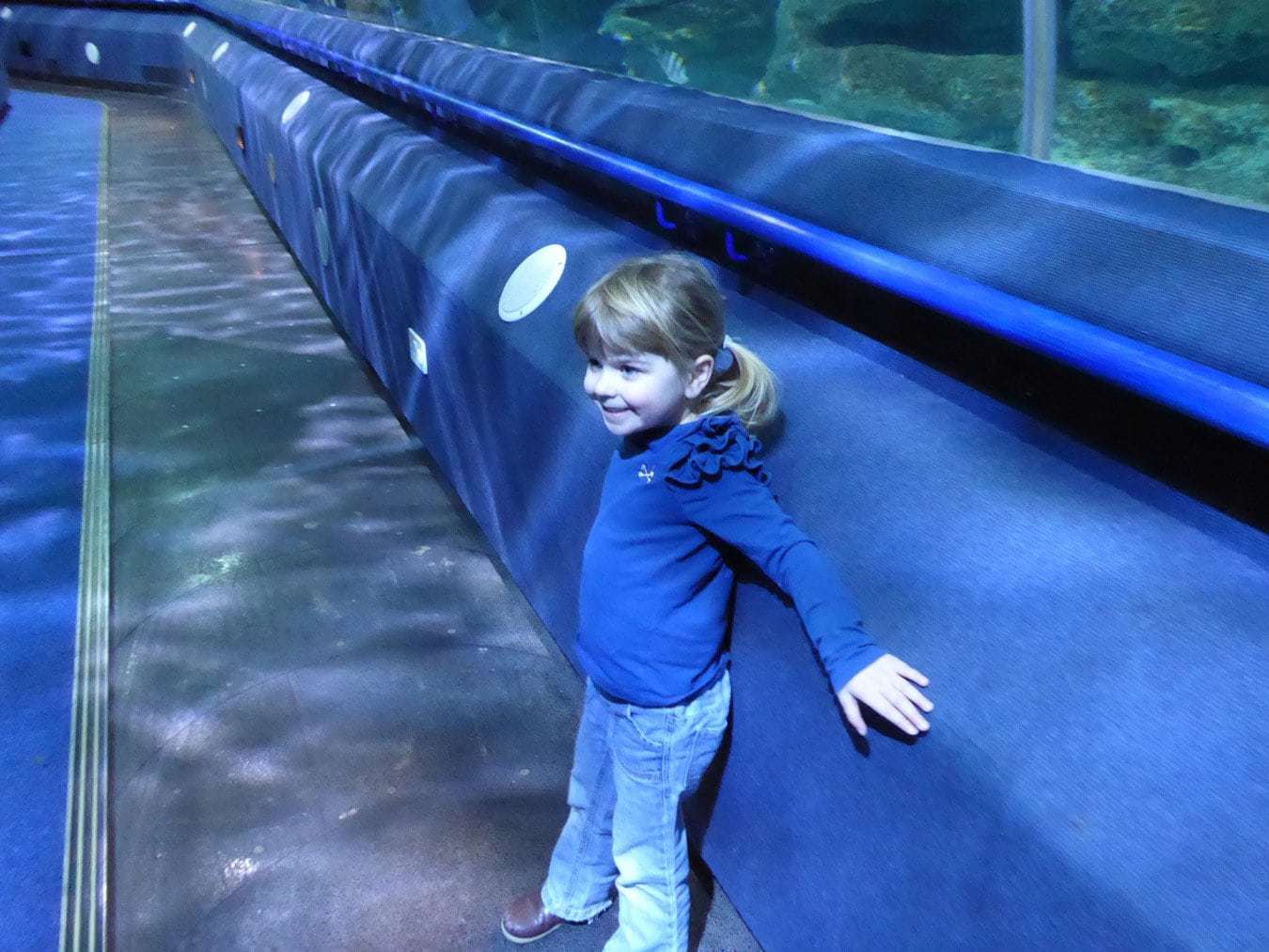 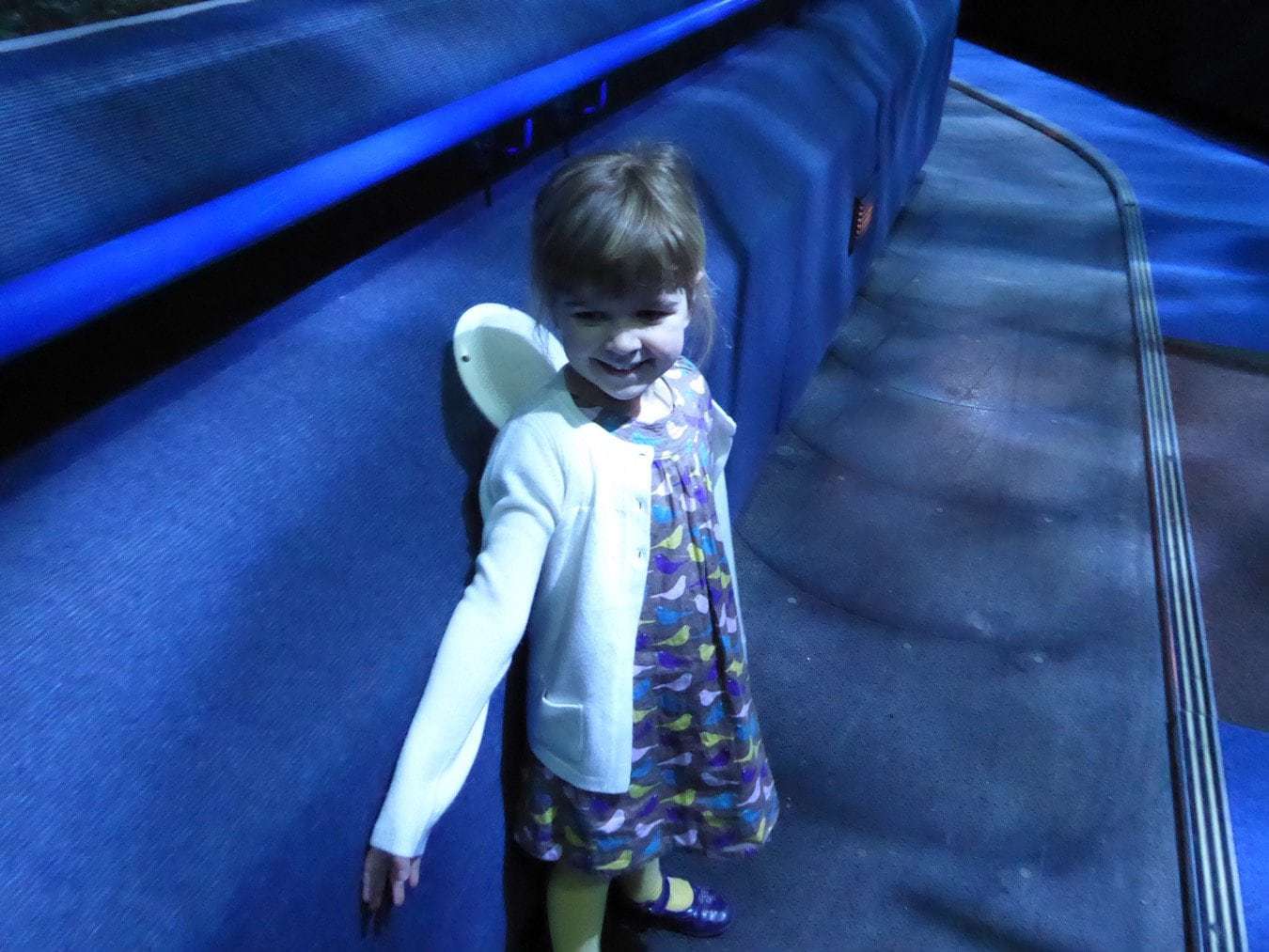 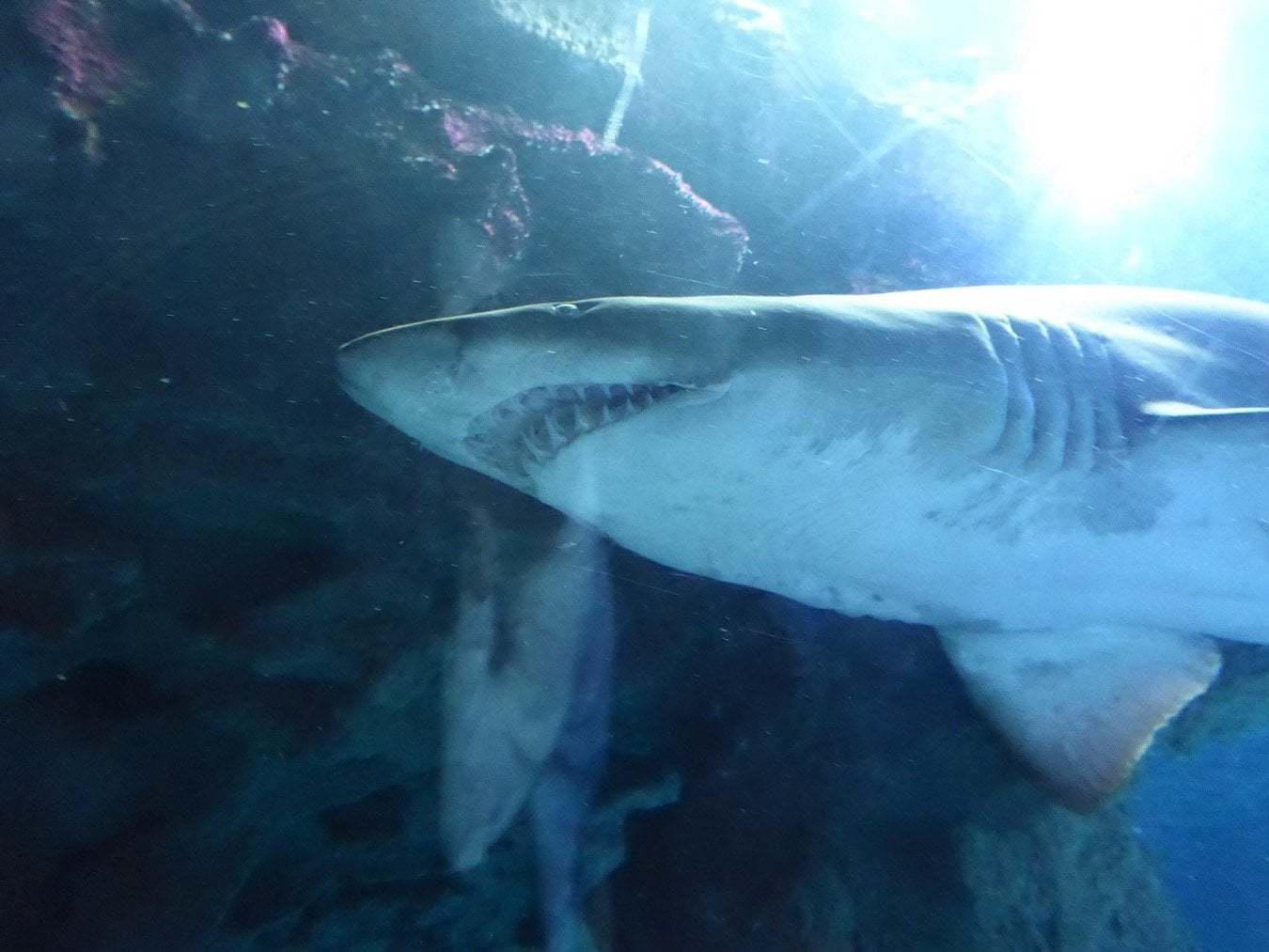 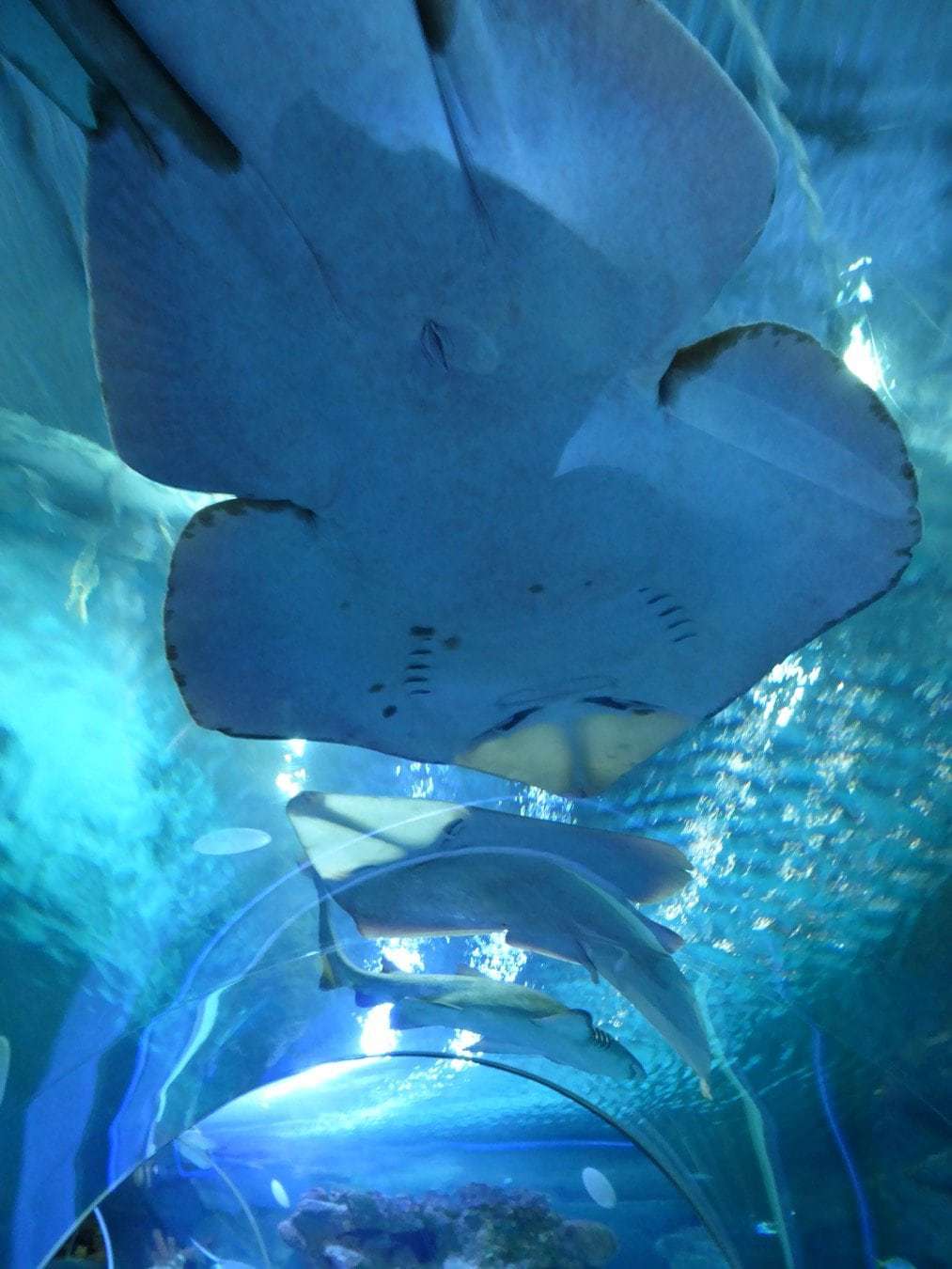 Overall (despite my terrible photography; inside and through glass isn’t my strong point) we had a really lovely time at the Blue Planet and thoroughly enjoyed our few hours on a wet and windy winters day.

Thank you to the Blue Planet for providing us with entry in exchange for this review.

I love Blue Planet but I refuse to go because I feel like I'm being robbed. I really don't mind paying for a fun day out and I understand all the hard work that goes in to maintaining such an attraction but charging for parking?! That's just mean. Especially, as you're only in there for a couple of hours max (even less if you have kids like mine whose average pace is running).