During the summer holidays, my friend and I took our children (five between us, aged between six and 10), to Beamish open air museum. I last went to Beamish some 30 years ago on a school residential trip and remember loving it (although possibly more to do with the fact I was away from home with my friends than the informative exhibitions!). The place is beyond recognition now and seems way bigger and much slicker than I remember it.

On arrival, after a short wait in a very efficient ticket queue, we were pointed towards the tram station, with trams running every 10 minutes taking visitors to each part of the museum. The idea behind the museum is to take you back in time to how we used to live, showing various aspects of life in the 1800s and early 1900s. The museum is split into various sections-there is a 1940s farm, a 1900s town and pit village and colliery, as well as an old-fashioned fairground and park and a steam railway. You can walk between each section or take the regular wooden trams which stop at each area. I think the longest walk between sections is no more than 20 minutes. Being inclined to laziness, I suggested we get the tram and as luck would have it one arrived within about two minutes. The old trams are beautiful and the kids really enjoyed the tram ride, imagining how life used to be before high speed trains, tubes and Uber. 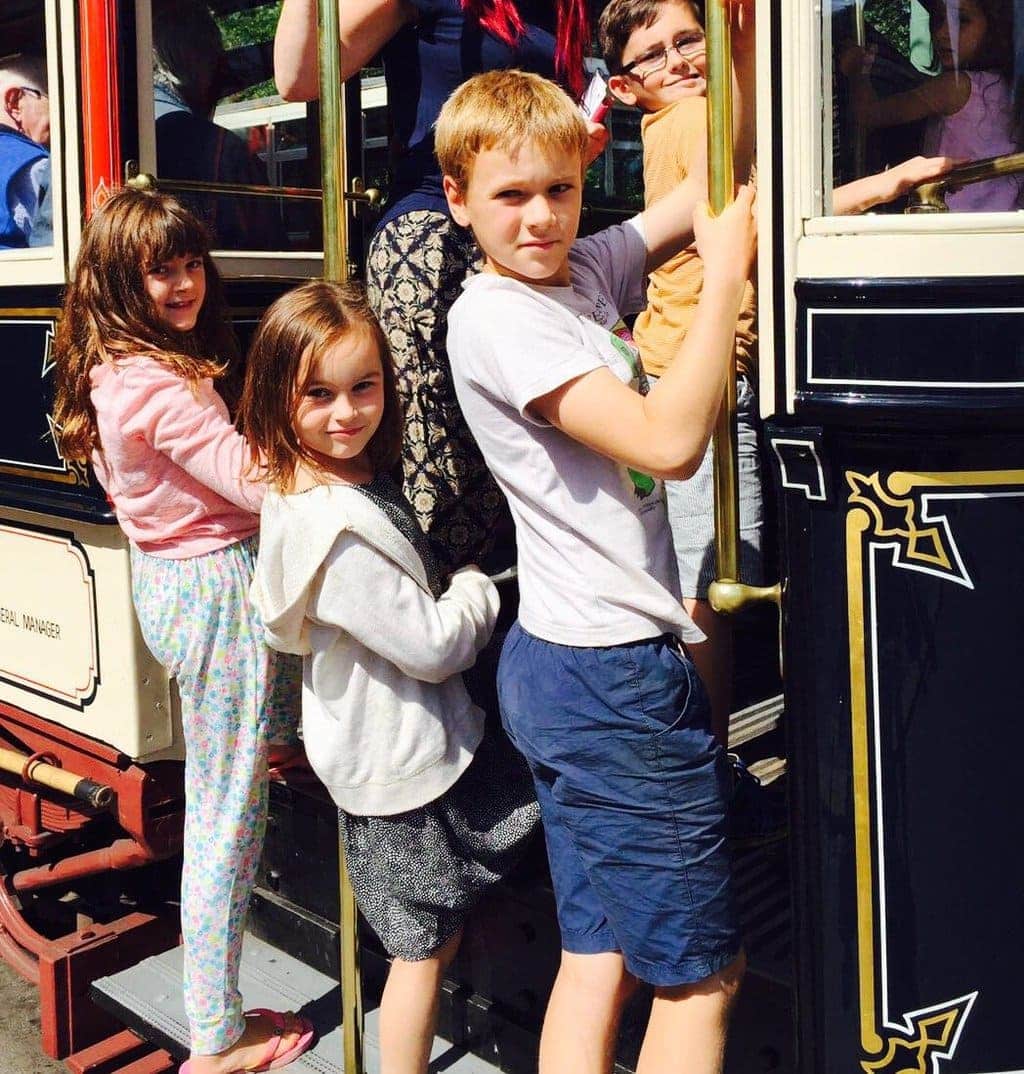 We decided to visit the 1900s town first as that seemed from the map to be the biggest area ( along with the pit village). The town consisted of two rows of shops either side of the tram track. Places to visit included a car mechanic’s, grocery store, haberdashers, bank, aerated drinks shop and of course an old-fashioned sweet shop! The staff serving in each of the shops were dressed in period clothes and were really knowledgeable and engaging with the children. When we were in the mechanic’s, the chap behind the counter spent a long time telling my son and his friend how the old gas powered car lamps worked and letting them fiddle with various bits of machinery. There were displays of old-fashioned bicycles and old cars and the place was kitted out as an olden days mechanic’s would have been.

Next was the grocery shop. We were really interested to learn from the shopkeeper that the reason the packets of flour, sugar, maize etc were each in a different coloured paper was because most people buying them wouldn’t be able to read a label. There were lots of disgusted squeals on seeing a giant barrel marked ‘pickled ox tongues’ by the door. The clothes store was really interesting and the kids were amazed to see that if they’d been around in 1910 they’d have been wearing full length dresses in all weather or little suits and bow ties. They were also slightly envious to learn that they’d have only had a bath once a week at most! They all loved the aerated drinks store, where a woman in period costume made them fizzy raspberry juice in a giant old fashioned soda stream machine and showed them how the Victorians would keep the drink fizzy by using a specially made glass bottle with a marble inside, which would block the neck when the bubbles were put into the drink. In fact, the children got so into the shops that they forgot to mention gong to the sweet shop for four whole minutes at one point. 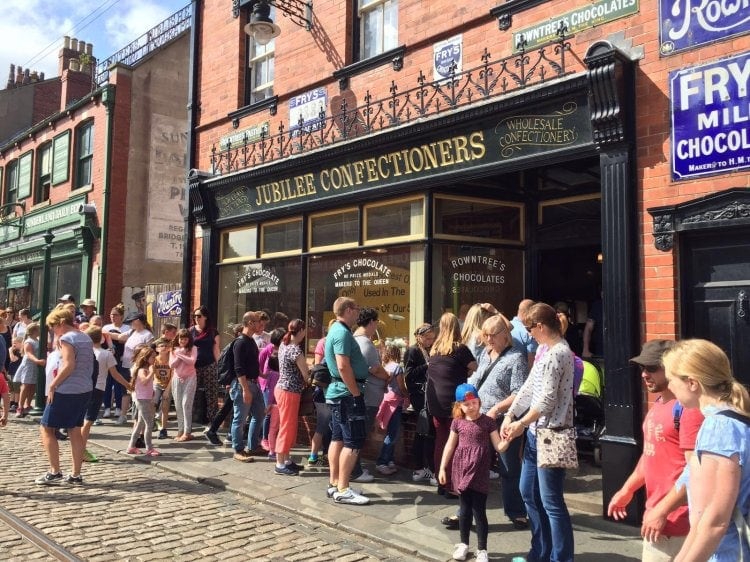 Eventually we couldn’t put it off any longer, so we braved the lengthy queue so they could buy a couple of ounces of cola cubes or liquorice torpedos. It was actually cheaper than cinema pick’n’mix so we were pleasantly surprised! We followed some people who seemed to have a purpose into a room next to the sweet shop, where a pear drop making demonstration was about to start. While it was really interesting to watch, the chap doing it wasn’t terribly good at explaining what he was doing and why. At one point, my friend asked him to repeat why he was hanging the sugary ball he was working with on a hook, as he was facing the wall when he explained it the first time. Instead of turning round, he answered the wall again so we were none the wiser. Still, all was forgotten when he handed round the biggest pear drops I’ve ever clapped eyes on. 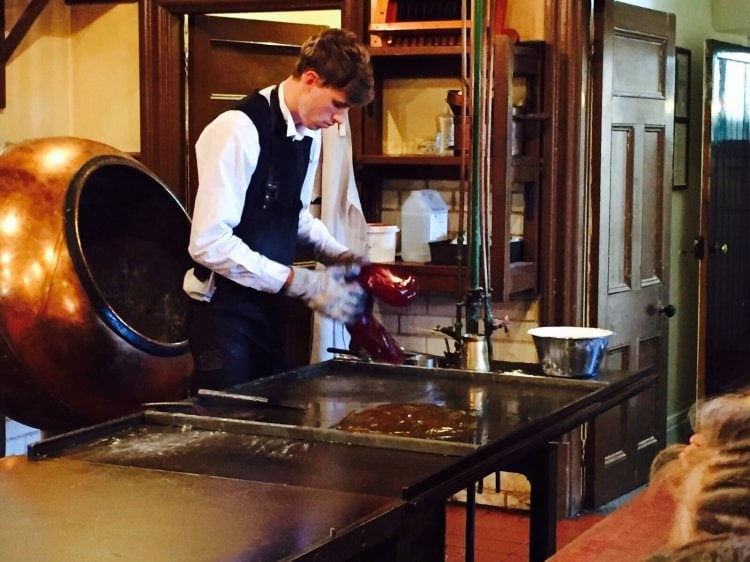 Next to the old town were a number of cottages showing how people used to live, and some ‘offices’ such as the dentist’s and the lawyer’s rooms. The dentist was absolutely brilliant with the kids and they (and I) were enthralled by his gruesome tales of early 20th century dentistry. 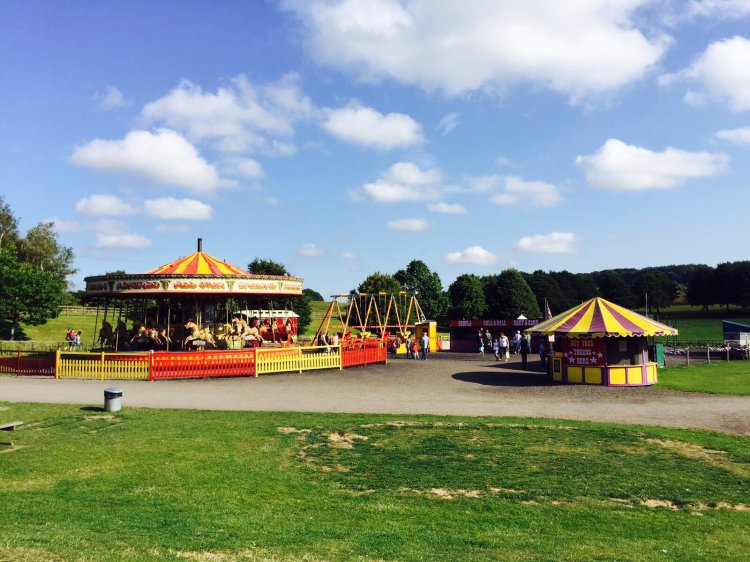 The fairground was next to the old town and the cottages, so we stopped off there on the way to the pit town. We had a great time trying to win coconuts, playing hoopla and darts and riding on the carousel. It was only 50p for each game so it didn’t feel like we broke the bank. 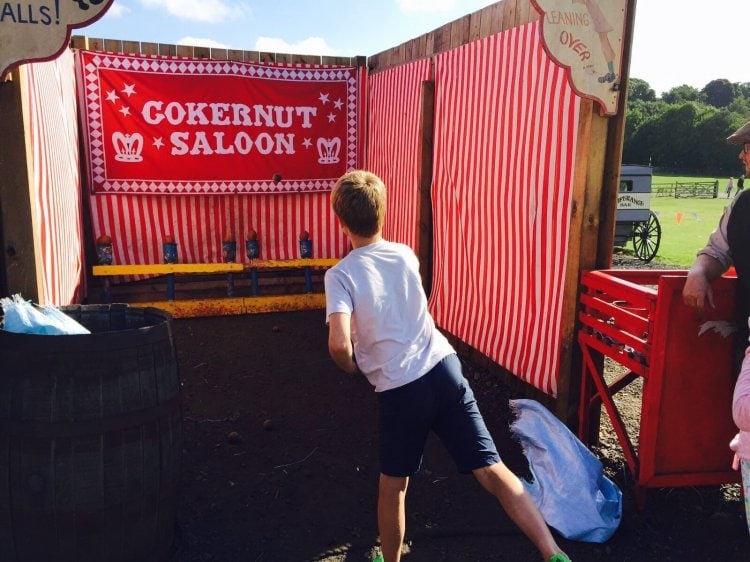 We couldn’t believe it when we realised it was 4.30pm and we hadn’t even made it to the pit village or the farm! Admittedly we’d only arrived just before midday and it opens at 10am, but a closing time of 5pm feels very early, especially in school summer holidays, and given the size of the place and the entry price. We can, however, use our tickets for free entry for the next 12 months which was quite an unusual bonus.

We didn’t use the tearooms as we’d brought our own picnic. There were plenty of places to eat picnics around the museum, including a huge grassy park just next to the 1900s town.

Although it was reasonably busy when we went, the only place we had to queue for any length of time was the sweet shop.

The children declared it a great day and we had loads of fun too.

Nb: Jane and her family received complimentary entry into Beamish in exchange for this review but all views and opinions are her own.

Living in the north east I visit beamish regularly and love it. I have visited so many time and every time I discover something new , such a brilliant family day out x