Earlier this summer, we found ourselves with a 36 hours in Boston with kids, sandwiched between 12 days in Florida and a trip to Vermont for a friend’s wedding.

For my husband and I, 36 hours in Boston was our chance to have some richly-deserved down time after spending 12 days living and breathing everything that Disney had to offer. But as much as we wanted to kick back and do nothing but mooch and soak up some of the city’s famous pubs, with a 7 and 5 year old in tow, we had to save the Samuel Adams for another day.

Day one of 36 Hours in Boston with Kids:

We landed in Boston just before 2pm, and took a taxi from the airport straight to our accommodation, the Midtown Hotel in Back Bay which we discovered upon check-in is famous for its cameo in the Mark Wahlberg film ‘Ted’. This was a mid-budget hotel, comparable to a Holiday Inn or Premier Inn, and while the rooms and facilities were fairly basic, it served us well for our two night stay.

3pm: First stop was a late lunch, so over pizza we debated whether to make the most of the rest of the afternoon by joining one of the famous Boston Duck Tours, which take in the sights by land and by river, or instead jump on the Hop On Hop Off Trolley Bus which circumnavigated the city.

It was a close call, but in the end we plumped for the Hop On Hop Off bus – not least as it meant we could come and go as we pleased, but also their route included crossing over the Charles River into Cambridge, meaning we would catch a glimpse of MIT and Harvard University.

The success of an open top bus tour is often determined by the quality of the tour guide, and we were lucky that ours seemed happy to go off script and take plenty of questions from the passengers. The tour took around two hours, taking in Downtown, Beacon Hill, Back Bay, the Theater District, Cambridge, and the Waterfront District. 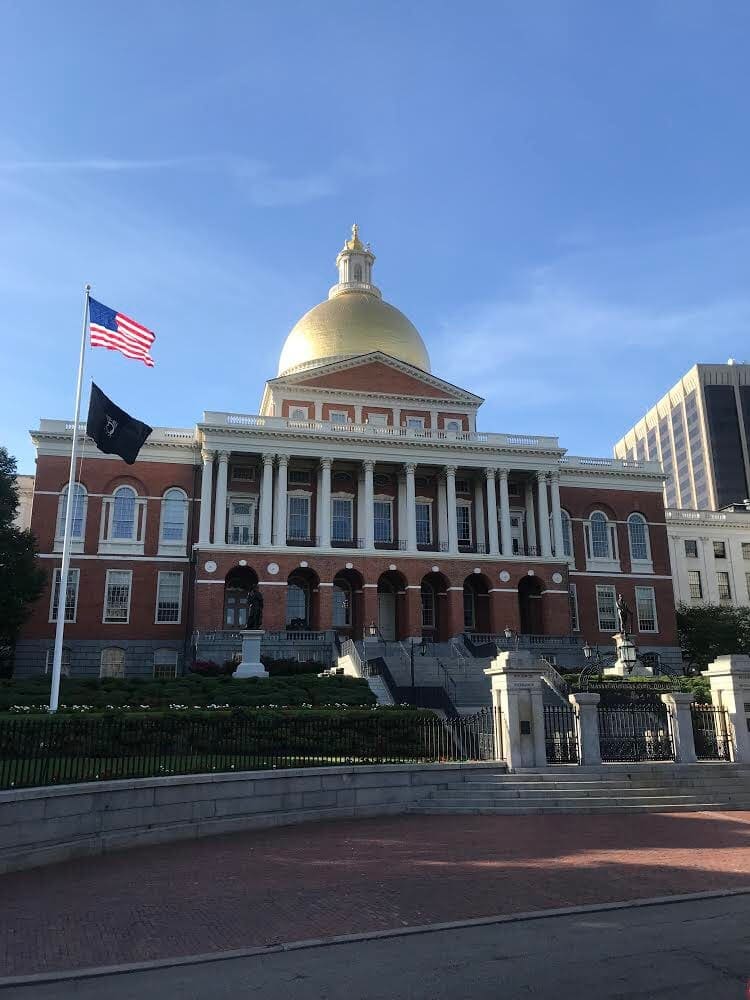 I loved meandering through the streets around Boston Common, with the beautiful red brick row houses of Beacon Hill and the grandiose Massachusetts State House. My husband was thrilled to go past Fenway Park, home of the Boston Red Sox. And the girls were happy just to take it all in, switching seats depending on which had the best views of the different sights, and chatting to the bus driver.

By the time we had completed the full circuit, it was coming up to 6pm and we were the last passengers on board, so the kindly driver drove us back to the stop closest to our hotel before clocking off for the night.

Day two of 36 Hours in Boston with Kids:

9am: After a breakfast of take-away pastries from a local bakery, we caught the Subway to the city waterfront for what would become the highlight of our stay.

We had pre-booked our Boston Whale Watching Cruise through our tour operator, and so headed straight to Central Wharf, home to the world renowned New England Aquarium and our departure point.

Once aboard, our catamaran headed to Stellwagen Bank National Marine Sanctuary, a stretch of open water at the mouth of Massachusetts Bay that acts as a feeding ground for whales, dolphins and other sea life. 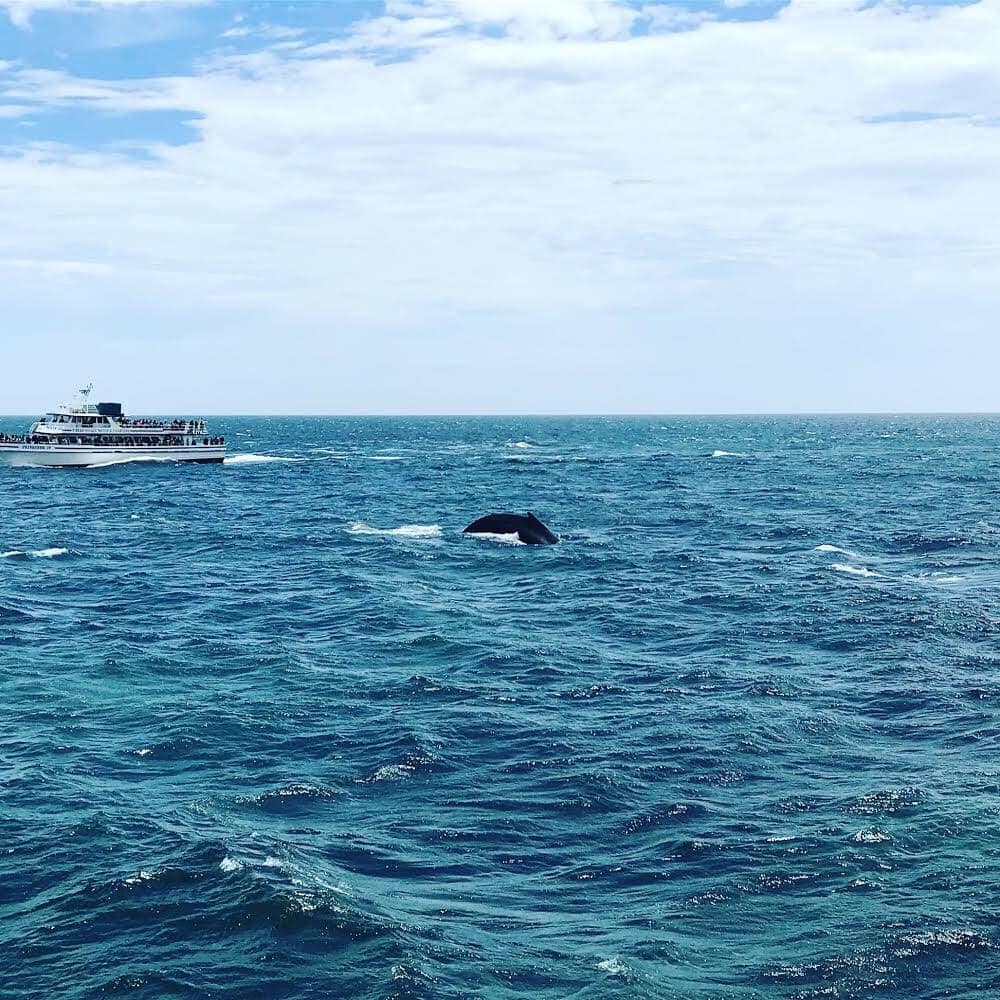 As we pulled out of the harbour, some of our fellow passengers spotted some seal pups and a porpoise, but it was a fairly uneventful first three quarters of an hour, save for the crew of New England Aquarium naturalists who were on board to explain what we might see, how we could distinguish between the different types of whale and why we were heading to that particular stretch of water.

We weren’t disappointed. With a number of boats in the area radioing each other to alert to possible sightings, it wasn’t long before we too saw our first signs of life – a pod of dolphins which were playing a few metres away from our boat.

And then the whales. At first, a finback – enormous, second in size only to the blue whale – and then a number of beautiful humpback whales, whose tails would majestically flick out of the water then seamlessly glide back into the depths. And finally, a glimpse of a lone minke whale.

The tour guides were quick to stress just how lucky we were to see the number of whales that we did. While they can’t absolutely guarantee sightings, they have an excellent hit rate – but it seems we saw more than the average trip. It was truly an amazing morning.

Before long, it was time to turn back. The journey back to shore was a quiet one, with the girls lulled into a nap.

1pm:  We docked and we were starving. And my eldest had no hesitation in reminding me that I had promised to treat her to lobster while we were on the East Coast. So we dived into Legal Sea Foods, right next to the dock, which had a brilliant (and not at all expensive) children’s menu including the promised lobster and chips. She was in heaven. 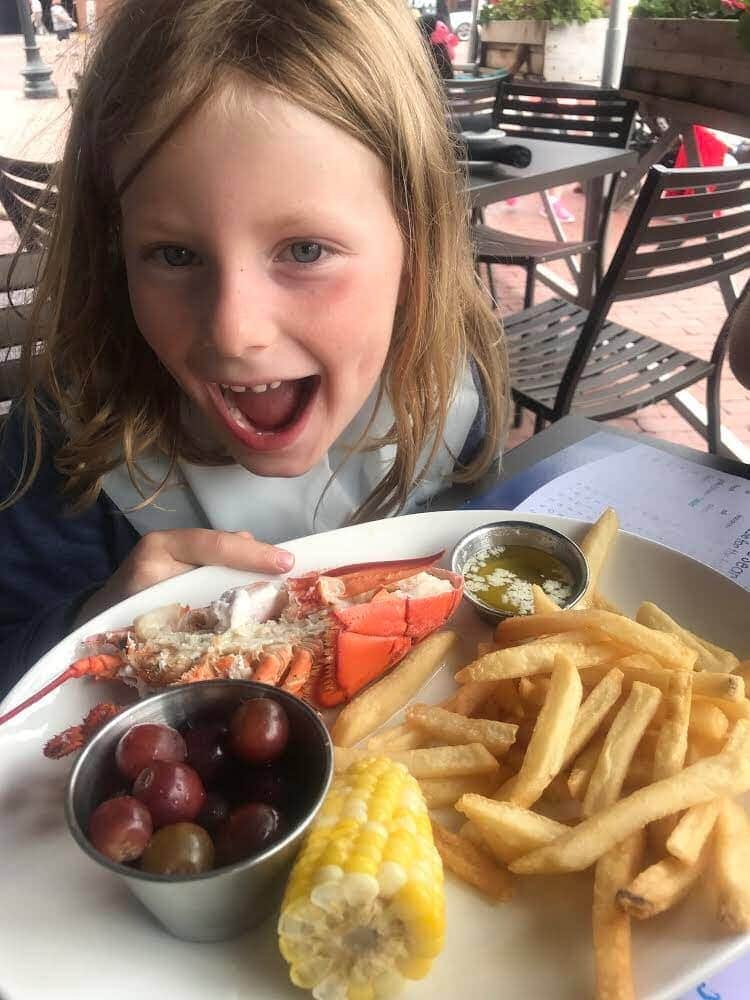 2:30pm After lunch, we walked from Central Pier through the Rose Kennedy Greenway – a mile long strip of grassy parks which followed the footprint of an old dismantled expressway – to the Boston Children’s Museum.

This was honestly one of the best children’s museum I have ever been to. Its centrepiece is the New Balance Climb, an incredibly cool twisty-turny climbing structure which spanned the building’s three floors. The girls loved it, and would have happily spent all afternoon climbing that.

But there was also so much more to entertain and inspire – from bubble making to fossils to a 100 year old Japanese house to explore. All of it was utterly brilliant, and I just wish we had more time to do it justice. 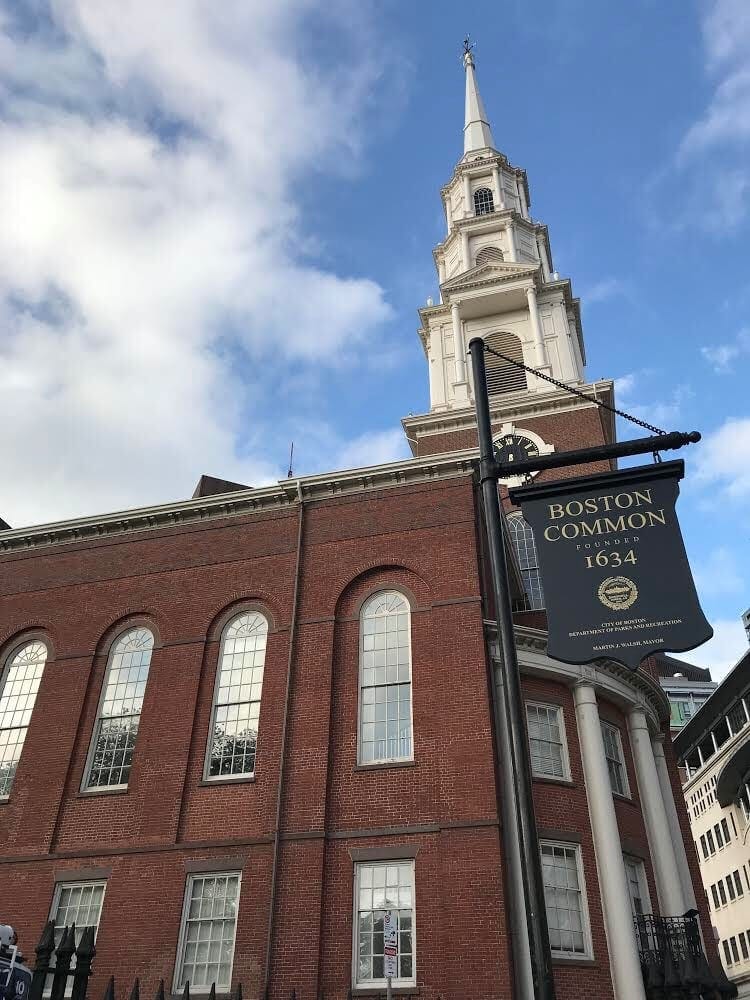 5pm: But unfortunately, the museum closed at 5pm, so our visit fell short but sweet. So from there, we walked back through the city, past the Boston Tea Party Ships and Museum, through the financial and shopping district, finally ending up at Boston Common, America’s oldest public park, and the beginning of the Freedom Trail.

Had we had more time, we possibly would have tried to walk the whole Freedom Trail – I’d heard good things about Boston By Little Feet, who run guided tours specifically for 6 to 12 year olds.  But as it was, we were content just to stroll around the park and play in the children’s playground for a while.

7pm: It had been a long day and bellies were rumbling, so we ambled our way back from the Common to our hotel, via the Subway, stopping off for noodles (and a trip to Sephora for me!) at Wagamamas in the Prudential Shopping Centre.

And so to bed, with the prospect of an early start and a long drive north the next morning.

Over the day and a half we must have walked miles, but given the amount we packed in, it felt like we’d spent longer there than a mere 36 hours in Boston with kids.  Boston is a truly fabulous city, with so much history and heritage packed into a relatively small area. Maybe next time we’ll get to stay a little longer.

NB: This is a guest post submitted by Katy who had such a fabulous 36 Hours in Boston with Kids that she just wanted to share it with us. 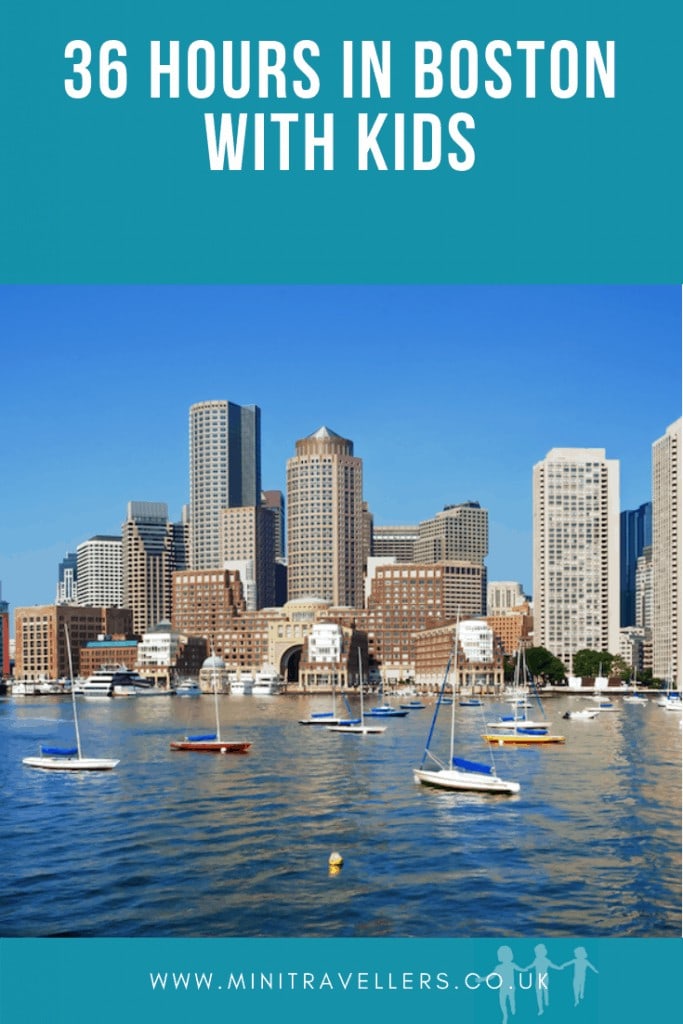 Such a fantastic blog! This place looks literally great to explore. I am adding this place to my bucket list. All pictures looks ultimate in your post. Loved your guide and post. Thank you so much for sharing this post.