My three daughters and I had a roaringly good time seeing Zog Live in the world premier at the Rose Theatre Kingston, ahead of a UK tour.

Our trip to see Zog Live, was preceded by a day out in central London. Despite my best efforts to point out lots of famous sights, my three year old daughter spent the morning constantly looking for, or asking for, “Zog”. By 4pm this had become a little tiresome, and thankfully her wishes were granted at the wonderful Rose Theatre where she got to see Zog live on stage.

We were sat in the beautiful new chairs recently installed in what was previously the pit area of the Rose Theatre. I felt a little nostalgic about all the productions I had been to where families sat on cushions in the pit, but then having always chosen the comfort of the stalls seats and sofas, I can’t really comment, and I should probably appreciate having all the comfort of the new seats with a much closer view of the action on stage.

There was a buzz of excitement in the audience, when the cast of five took to the stage in amongst a whole host of musical instruments including a double bass, banjo, guitar, clarinet and saxophone. Clever sound looping by the talented cast built the music up and the audience fell quiet with expectation. The set was based around a scaffold structure which meant the cast could take the action up high, and the beauty of Axel Scheffler’s illustrations, were brought to the stage with the elegant puppetry, which included a couple of witty ‘funny bunnies’ who kept appearing throughout the tale. 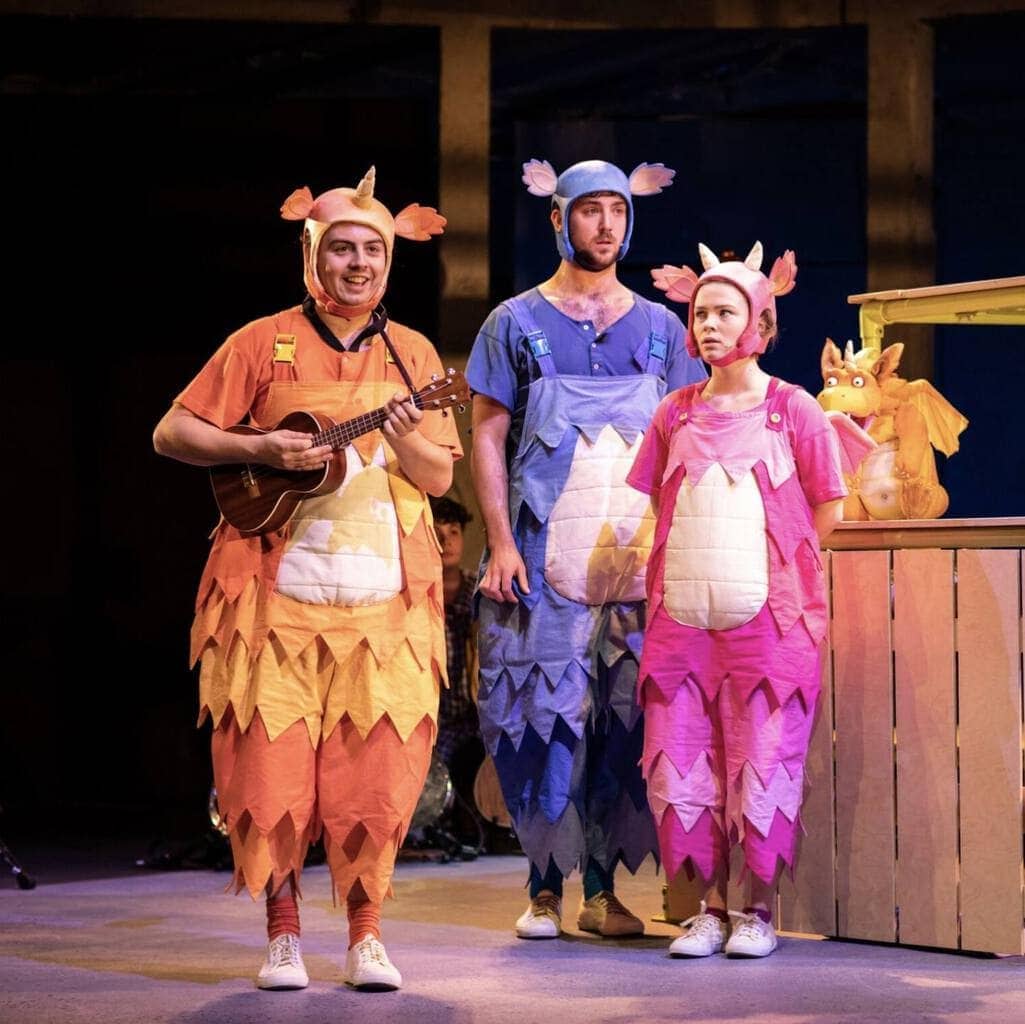 The audience were introduced to their heroine, Pearl, before the tale began with a beautiful song and stirring vocals, with the lyrics suggesting Pearl was not sure which direction her life would take.  The much loved tale of Zog then began in earnest, after which seemed quite a wait, in the colourful Dragon School. Queue much fun and games with the cast in dragon costumes and operating the dragon puppets slickly. After a game of dragon-eye-spy, the star of the show, Zog was introduced with song, dance, fun, and the odd bit of tumbling. Madam Dragon entered the action and demonstrated her flying, whilst suspended from the scaffolding. The audience were delighted when her pupils started their flying lessons and the puppets flew over the stalls seat in the auditorium and Zog, in particular, received a round of applause for his success.

True to the book, Pearl came to the dragons rescue when the dragons lessons ended in bumps, particularly after the terrible landings, and always had a song, on occasion with funny bunny backing vocals.

The final lesson of Dragon School, to rescue a princess, ends with Zog and his friends receiving their golden stars, but Madam Dragon locking Pearl in a cage. Zog asks for Pearl to be released but Madam Dragon is hoping to supplement her salary with a ransom so holds onto the key and settles down for nights sleep.  In a slight diversion from the book, it isn’t long until Pearl is given the key by a friendly squirrel. However Pearl’s escape is interrupted by the arrival of a jolly, but slightly anxious,  Gadabout the Great and the story resumes. Pearl delivers my favourite line of the book, ‘the world’s already far too full of cuts and burns and bumps’ and announces her future career as a doctor to much applause, and the respect of Madam Dragon. Gadabout if swiftly recruited as a nurse and Zog the ambulance, before the Flying Doctors zigzagged into the blue.

We thoroughly enjoyed this Freckle production, and my three year old is already eagerly anticipating a sequel production of ZOG and the Flying Doctors. 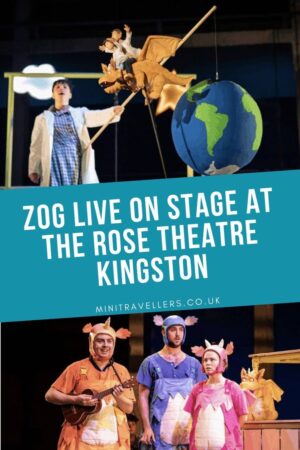