Whilst most of England were watching their teams’ final World Cup match, my daughters (aged 8 & 6) and I caught the train to Southwark, where they excitedly jumped aboard the Golden Hinde for an unusual sleepover in London… it was set in 1577.

As per instructions we arrived at 5pm with our pyjamas, sleeping bags, foam sleep mats, toothbrushes and toothpaste. I also packed a change of clothes, a book each, a night light and some emergency rations, in case the promised vegetable stew didn’t go down well. 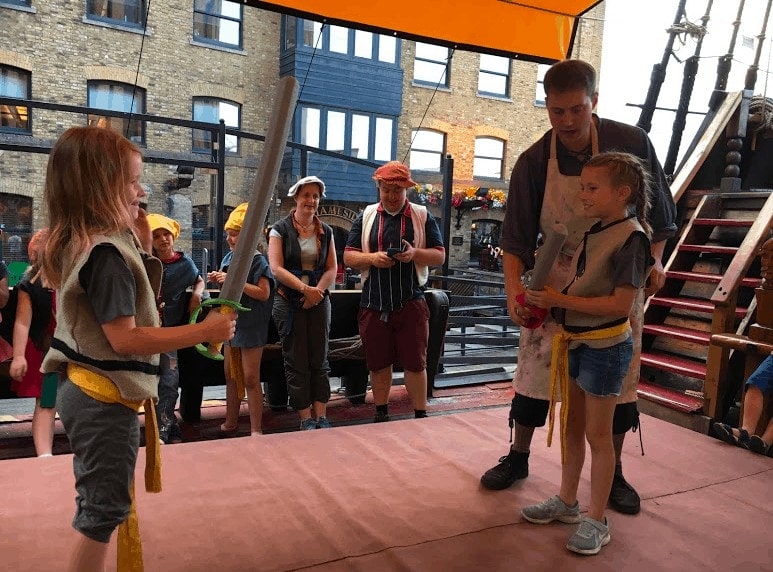 The Golden Hinde is nestled in a small dry dock amongst the hustle and bustle of borough market. As we boarded the ship we greeted by the welcoming crew of four actors; the captain, the barber surgeon, the gunner and the cook. There were three other families aboard; one celebrating their daughters’ 10th birthday. There were 9 children on board in total aged from 6 upwards to about 11. Most of our fellow visting-crew had visited the ship before for daytime activities and were very excited to be returning to sleep-over. 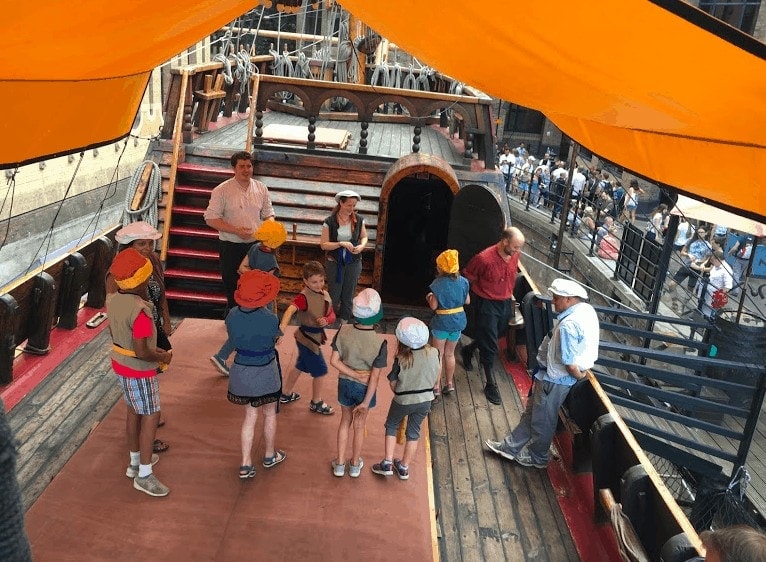 The immersive theatre began as soon as we were all aboard. We were led below deck to change into our ‘crew’ attire; a jacket, belt and hat for children and adults alike. Some fun ‘orientation games’ followed on deck as we all tried to get to grips with our ports and starboards.

We were taken to the Captain’s Quarters where we were shown the ropes whilst enjoying a tankards of ale (aka apple juice). The Captain entertained all the children with a potted history of the Golden Hinde and explained Sir Francis Drake’s mission and hatred of the Spanish fleet. Below deck, Barber Surgeon took us through the gruesome art of 16th century medicine, when most treatments feature blood letting. Whilst I may have felt a little queasy at this point, the children loved hearing all the details. On the Gun Deck, the Gunner taught the how to load and shoot a minion (small cannon). The children volunteered to roll the cannon across the deck and take turns as powder monkeys. Supper was an authentic vegetable stew, bread and water, served at two long tables in the well scrubbed decks below, which most seemed to enjoy. 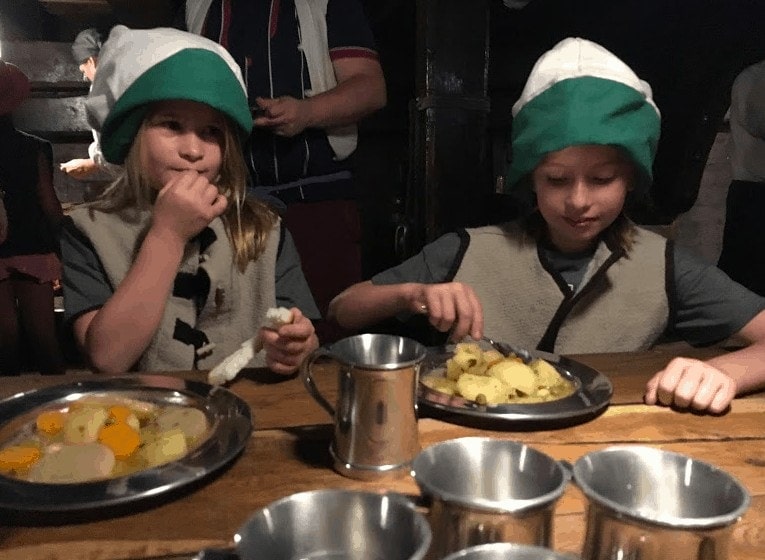 The grande finale was the attack of the Spanish Fleet. The children practised their cannon-firing, and then we all took cover below deck as the Captain battled to protect the ship. Thankfully on this occasion he was successful and peace and calm was restored.

The actors had a remarkable ability to engage all the children and kept them enthralled as they learnt life aboard the ship in 1577. They were also well versed in responding to little people’s banter and increasing excitement as the evening progressed, staying in character right up to bedtime. 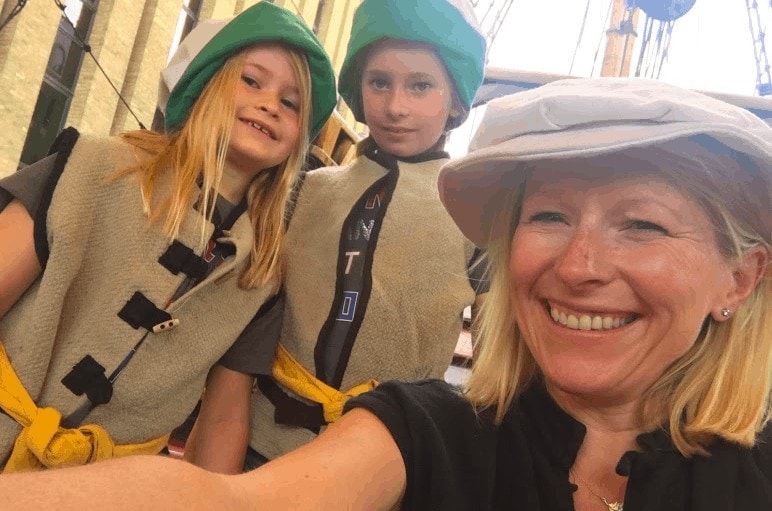 There was a noticeable change of tone about 9pm as bedtime approached. We were shown where to go in case of a fire alarm and then moved below deck so the children could change into pyjamas for a bedtime story, read by one of the actors. The families rolled out their mats, pillows and sleeping bags. Blankets were provided for those wishing to travel light, or really embrace an authentic experience. There were two clean but small washrooms on the lower deck where you could brush teeth have a quick wash and change. The Golden Hinde is not a large ship, and the gun deck where we were sleeping did not have enough head room for an adult to stand (I forgot this to my peril when I woke in the morning). However there was plenty of room for everyone to stretch out comfortably. After the bedtime story was over, adults too settled down and lights were turned out at 10pm. 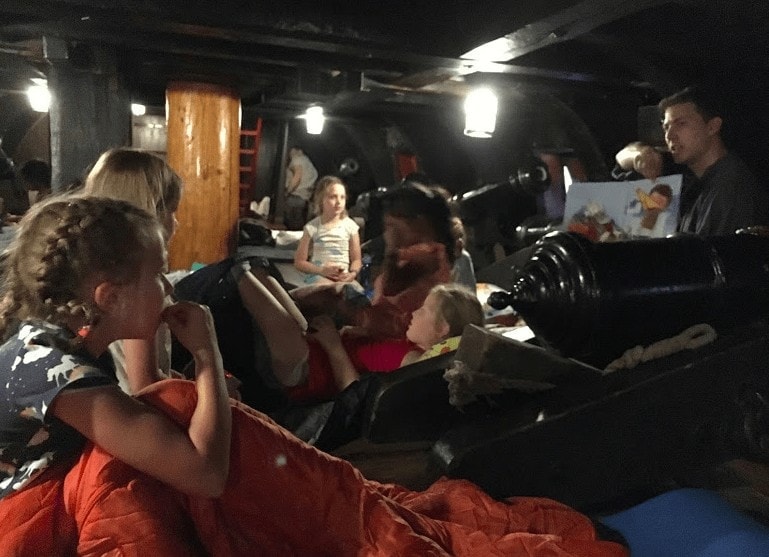 The children slept remarkably well given that there were 9 children and 7 adults in one space. A couple of the actors slept on the top deck to ensure security during the night. It was a very hot evening in London that night, but the ship remained cool with a few windows open. The heat and proximity of the nearest pub did mean we could hear a lot of World Cup revelry during the night, but eventually I got some sleep too. When we woke we enjoyed a breakfast of bread and milk, with tea and coffee available for the adults. After packing up and a saying goodbye to our fellow crew we headed back to 2018 and set off for an early morning train back home. 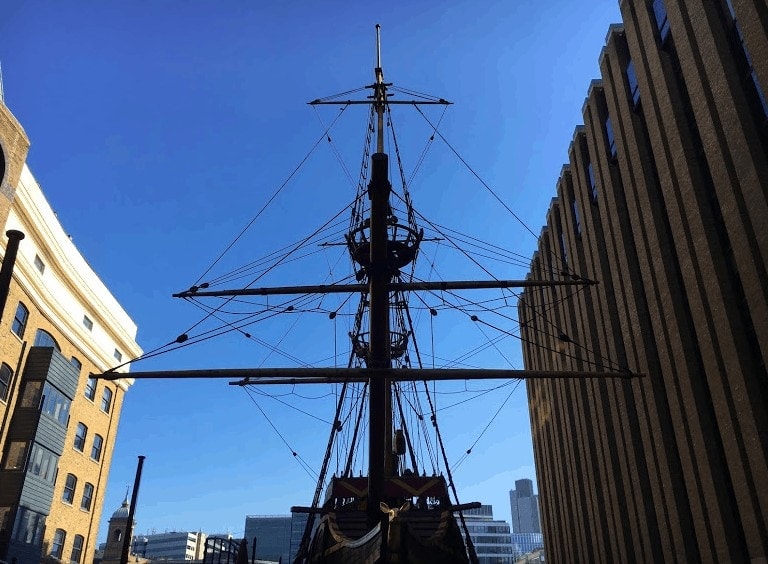 This really was a unique adventure. My daughters absolutely loved it, and hopefully picked up an appreciation for a little bit of history along the way. The sleeping part is not for the feint-hearted or those too attached to their modern day comforts, but the amazing intimate and immersive experience is well worth it. The talented team at the Golden Hinde have numerous events going this summer and the next unusual sleepover experience is scheduled for 8 September

NB: Lucy and her daughters received complimentary tickets to the Golden Hinde Night Voyage for their unusual sleepover in London, but their opinions are their own. 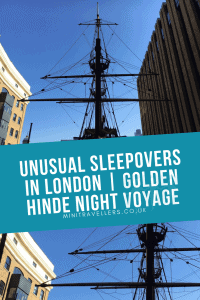 Oh wow, what an amazing experience! It must have been so exciting.