The Wind in the Willows, is at the Polka Theatre, Wimbledon, until 17 Feb 2019. This is our review.

The highlight of the Polka Theatre’s Winter Season has to be this wonderful adaptation of Kenneth Grahame’s classic book, The Wind in the Willows, first published 110 years ago. This well known tale of Ratty, Mole, Toad and Badger is brought to life on stage, enticing young audiences to enjoy the same story as many generations before them. The Wind in the Willows started life as as a bedtime story Kenneth Grahame told to his young son, which he put down on paper once he had retired from his position as Secretary of the Bank of England.

As the sun rises over the river bank, wonderful puppets and beautiful vocals help set the peaceful scene and calm the excited audience. This adaptation is set around a tree stump on the bank of the river, from which the characters appear. Charming Ratty and the timid but inquisitive Mole take to the water in Ratty’s much-loved boat. They meet the authoritative but kind Badger along the way, before the flamboyant Mr Toad loudly bursts onto stage in his latest motorboat. Nothing is ever dull with the thrill-seeking Toady on stage, but his vain desires to live as a human indicate trouble ahead.

Two shifty looking rabbits introduce the ominous wild wood, with slightly unnerving weasels eyes glowing out of the dark set (something to be prepared for if taking an under 5). The wise badger speaks of changes afoot with suggestions of human development, and destruction, as the wind whistles through the willows. 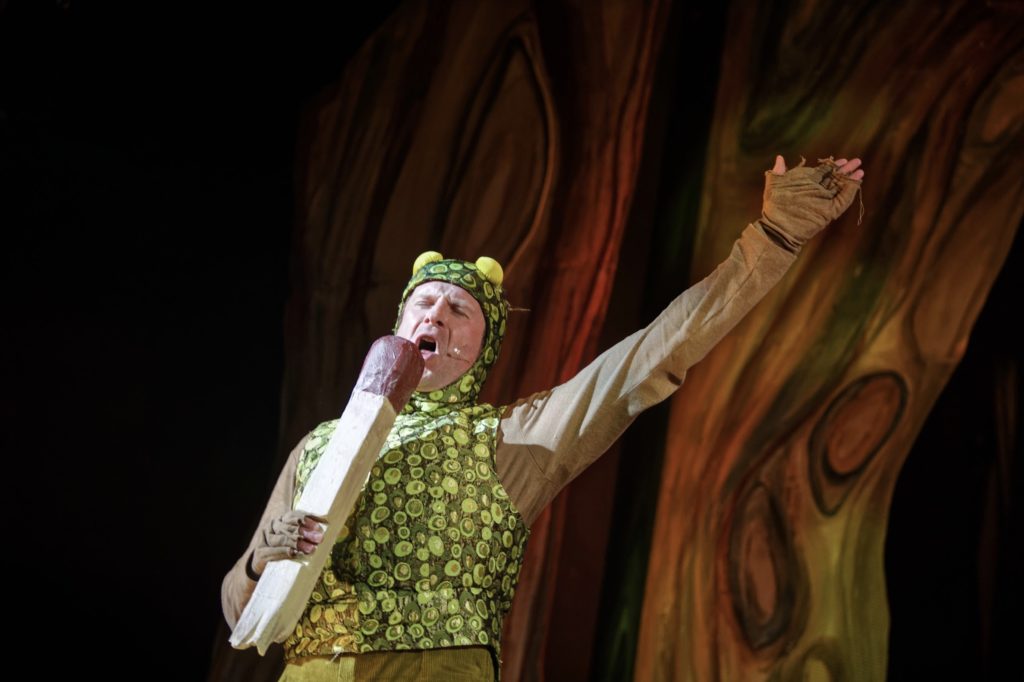 The characters costumes are very creative and fun. We particularly liked Toady’s helmet fashioned from a conker. There are some very witty musical numbers performed by Mr Toad as well. As we approached the interval the action moved into the audience, much  to everyone’s delight and amusement. Toad’s inevitable demise is very cleverly adapted and staged. Whilst Toad is incarcerated, Ratty takes centre stage lamenting widening his horizons beyond his river bank home, with a beautiful ensemble and talented French guitar-playing rat.

Once Toady has made his great escape, and badger has shown him the error of his ways, there is a slapstick fight scene at Toad Hall, where our heroes defeat the stoats, weasels and ferrets. The finale had added excitement for the young audience in the first few rows as snow began to fall, and the show ended to rapturous applause.

The running time was about 2 hours, including a 15 minutes interval during which you can buy ice cream tubs or choose from a selection of snacks in the theatre’s cafe. Recommended age is 5 and over, although there were many younger members of the audience on our visit.

Lucy and her daughter received complimentary tickets to the performance, but all their opinions are their own.