The TomTom Go 5200 is a new portable Sat Nav from TomTom, it’s the company I think of when I think of Sat Nav as it was the first brand of Sat Nav I ever owned. The Go 5200 has a five inch touch screen, voice activation, real time traffic updates and a host of new features.

I put the TomTom Go 5200 to test on a recent holiday from the Wirral to Swansea Bay with my Mum and the girls. The journey was (according to Google maps) due to take 4 hours.  As we’ve been to that part of the world before I knew it would take 5 hours, all map information about this route is always too optimistic.  My other reason for trialling the Sat Nav that week was that we were taking our car with an inbuilt Sat Nav so it was the perfect opportunity to road test the TomTom against the Landrover one.  I  could give the TomTom to my Mum and she could compare the two routes. 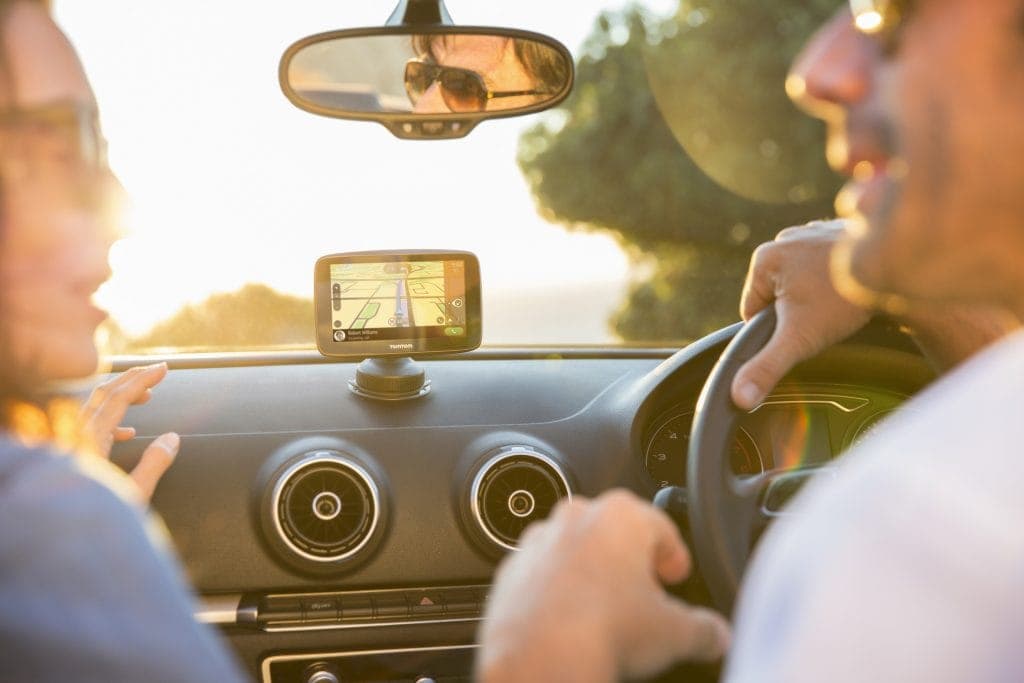 There is a SIM card built in to the Sat Nav which allows for free ‘realtime’ traffic updates. It is also said to work world wide with no data roaming charges .  We may well try this out on our road trip in Brittany in the summer. It also keeps the speed camera database up to date and includes ‘average speed zones’.

We used the ‘real time traffic updates’ often during the trip to Wales and what was interesting was that it often proposed different times to the Landrover Sat Nav and was in fact more accurate.  It knew quite a lot longer before the Landrover’s own Sat Nav that we would in fact take 5hrs 30 to get there rather than 4 hours!

The TomTom also integrates with both Android and iPhone.If you connect it via Bluetooth, it will alert you to messages from apps you let it have access to.  It will also read that message out loud to you.  You can even talk to “Siri” or “Google Now” by pressing a button on the Sat Nav screen.  Unfortunately due to the lack of mobile signal in seemingly any part of Wales this wasn’t an option for us to use and when I have tried to trial it again it has seemed a bit of a faff, nice idea but not something I’d use frequently.

The TomTom is fairly intuitive to set up.  I gave it to my Mum (who has a version of the TomTom) the night before our first trip and she worked out how to set it up and programme it with the route we wanted it to take.  It’s claim that it works ‘straight out of the box’ was correct!

There is an app you can download called TomTom MyDrive. You can set favourite destinations, plan your journeys with stop offs and diversions etc before you even get in your car. Once both are in range of each other it will send your plans straight to your Sat nav.  I love this feature as one of my pet hates of Sat nav is sitting on the drive waiting to be able to programme it – probably because I’m always on the last minute for things and don’t factor in time to do it.

The mount for the window actually works, which is unusual and allows for easy positioning when driving.

In summary a great Sat Nav.

NB: We received a TomTom Go 5200 in order to review but all views and opinions are my own.