As a family we love to go to the theatre, and we are avid Julia Donaldson fans so when the opportunity to see The Snail and the Whale at The Lowry Theatre came up, I naturally jumped at the chance.

Unfortunately there was a mix up with tickets, and although quickly resolved by the friendly staff, our seats changed from being down in the stalls to up in the tier looking down on the stage (sort of sideways due to the horseshoe layout of the theatre). Whilst some would shudder at the thought of being in the action, I think for plays like these it can be key to its success in keeping the children’s attention, and whilst my 6 year old could lean over safety to see, my 3 year old had to sit on my lap to see anything and she didn’t last the distance.

The story of The Snail and the Whale, (those who haven’t read it 50 times already) is about a tiny snail who decides he doesn’t want to live on his rock any more, he’d like to travel the world. He hitches a lift with a great big humpback whale, and rides on his tail to far off places. When the whale is sent off course by speedboats and becomes beached, it is down to the snail to save him.  Now, you might be thinking how on earth do you make that into a play? I was too.

But what Tall Stories have managed to do is creatively weave two similar stories together, with just 3 actors and very minimal but extremely versatile stage props. They tell the story of a young girl whose loving father works in the navy and whom she longs to go with and share his journeys. The play is narrated by her older self who also uses the violin to perfectly capture the sounds of the story.  Throughout the play they managed to balance just the right amount of audience participation, “she’s over there” to singing with lots of funny one liners for laughs, but nothing too involved that might scare shy little people. In fact, we are still singing one of the songs and probably will every time we read the story! 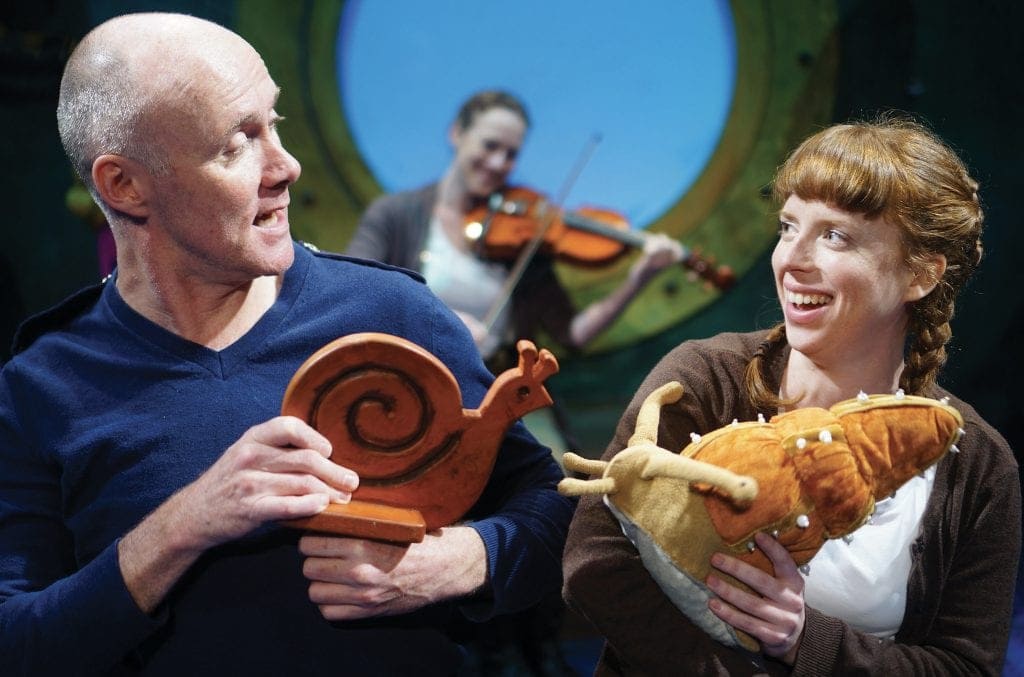 If you are unsure about whether your child would sit for the whole performance (a brilliantly timed 55 minutes) , or you have an older child that would love it but a younger child who would rather flip the seats or eat their way through, I would recommend looking out for a relaxed performance where no one is bothered about sweet wrappers or the odd cry/meltdown. My youngest lasted for 45 minutes of this play before losing sense of normality, a testament to the play in itself, although she did start asking where the whale was after 20 minutes!  And although the leaflets say the play is best for over 4’s, there were plenty of tiny people today and I would say 3.5-4 year olds would enjoy the play.

If I was unsure of anything, it was the switching between contexts of the story, from the girl playing with her father, to him being away and her listening to him narrate a story, back to playing out what had happened before he left, and how easy it is for young children to decipher those distinct episodes especially as the scenery, the actors and their clothing are the same throughout. However, when I checked with my son (6.5 yrs old) he told me he hadn’t understood the difference but had enjoyed the play anyway.

And lastly but by no means least, is the venue. The Lowry is a great theatre and a perfect family venue. It is super clean, and staff were very welcoming and helpful in guiding you through the theatre. It is easy to park in the Lowry Outlet (we paid £6 for 5 hours), you are directly opposite the Imperial War Museum and there are so many restaurants we were able to make this an afternoon of fun!

There is so much on to see at The Lowry Theatre do check out their What’s On page!

NB: Nicky received tickets to see The Snail and the Whale but all views and opinions are her own