A review of The Play That Goes Wrong which is Fawlty Towers meets Noises Off.  It’s also a multi award-winning smash hit comedy, now playing on Broadway and enjoying its 4th year in the West End.

The Play That Goes Wrong (now touring the UK and currently in Liverpool) had the audience in hysterics from practically the first minute. The lady next to me was literally shaking with laughter for most of the two hours and five minutes (with an interval).

The premise of The Play That Goes Wrong is that The Cornley Polytechnic Drama Society are putting on a 1920s murder mystery, but as the title suggests, everything that can go wrong… does! As the accident prone thespians battle on against all the odds to reach their final curtain call, hilarious results ensue!

The compact stately home set does more than you expect it can over the 2 hours and whilst doesn’t change much at all, it does enough to complement the hilarity.  Doors that don’t shut, shelves that won’t stay up, windows that break and finally floors that come down, all add to the amusement of the plot. 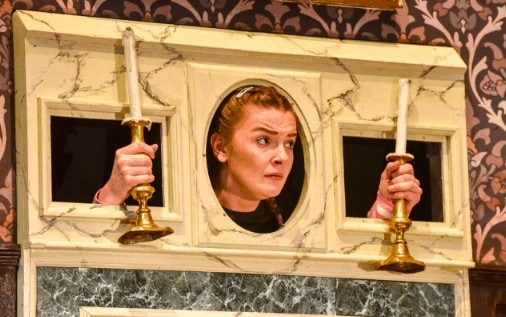 Well I say plot, in reality who did it and why isn’t really the point.  I don’t think I actually know who did do it, and who was actually murdered in the end, but it didn’t matter at all.

The audience interaction added to the laughter, with even a few panto ‘Oh no he didn’t’ thrown in for good measure.

Jake Curran plays Chris Bean and who attempts to keep it together as everything slips away from him, but my personal favourite was Bobby Hirston as Max, who smiles at the audience like a cheshire cat to endear them to his performance rather than the unfolding drama.

On the night we reviewed the understudy Louisa Sexton stepped into the role as fictional understudy Annie.  Her performance was superb and I simply loved the constant mishaps that befall her character.

The Play That Goes Wrong is on at the Liverpool Empire until Saturday, why not give yourself something to laugh about a book a ticket!

NB: We received tickets to seeThe Play That Goes Wrong but all views and opinions are my own.

I loved this play!! my sides and cheeks hurt for hours after as we’d laughed so much. It’s well worth going to see. A real feel good show