We were delighted to be invited by Liverpool Empire to watch this complete re-write of Mathew Bourne’s Swan Lake which in 1995 transformed the traditional view of the ballet world.

For those of you unfamiliar with Sir Matthew Bourne OBE, he is widely hailed as the UK’s most popular and successful choreographer and director. According to his Production Company, New Adventures, “his Swan Lake production in 1995 is perhaps still best known for replacing the female corps-de-ballet with a menacing male ensemble, which shattered conventions, turned tradition upside down and took the dance world by storm.”

So, it was with much anticipation that we took our seats for the updated version.  I will set the scene for the performance of Mathew Bourne’s Swan Lake, as we had some debate over the possible meaning of the storyline.

The story begins in the bedroom of the Prince in a grip of an apparent nightmare, after checking he is OK, his mother the Queen, leaves allowing a team of royal attendants to prepare him for his duties.  After both mother and son attend various events, the Prince comes into contact with an “unsuitable” lady who attracts his attention.

He invites her to attend the ballet with his mother, much to Mothers’ disgust, and she adds a terrific element of comedy due to her lack of theatre etiquette.  After the Queen leaves in disgust, the Prince returns to his room very depressed and turns to drink.

He then goes in search of the unsuitable lady or girlfriend as the program describes her, who is in a local  night club (which is cleverly named).  He enters, and after a brilliant choreographed scene of nightclub dancing to Tchaikovsky (who knew that was even possible?!), then consuming more alcohol, he is kicked out onto the street.  The Prince then does the best example I have ever seen of drunk dancing – simply beautiful and something we should all aspire to! 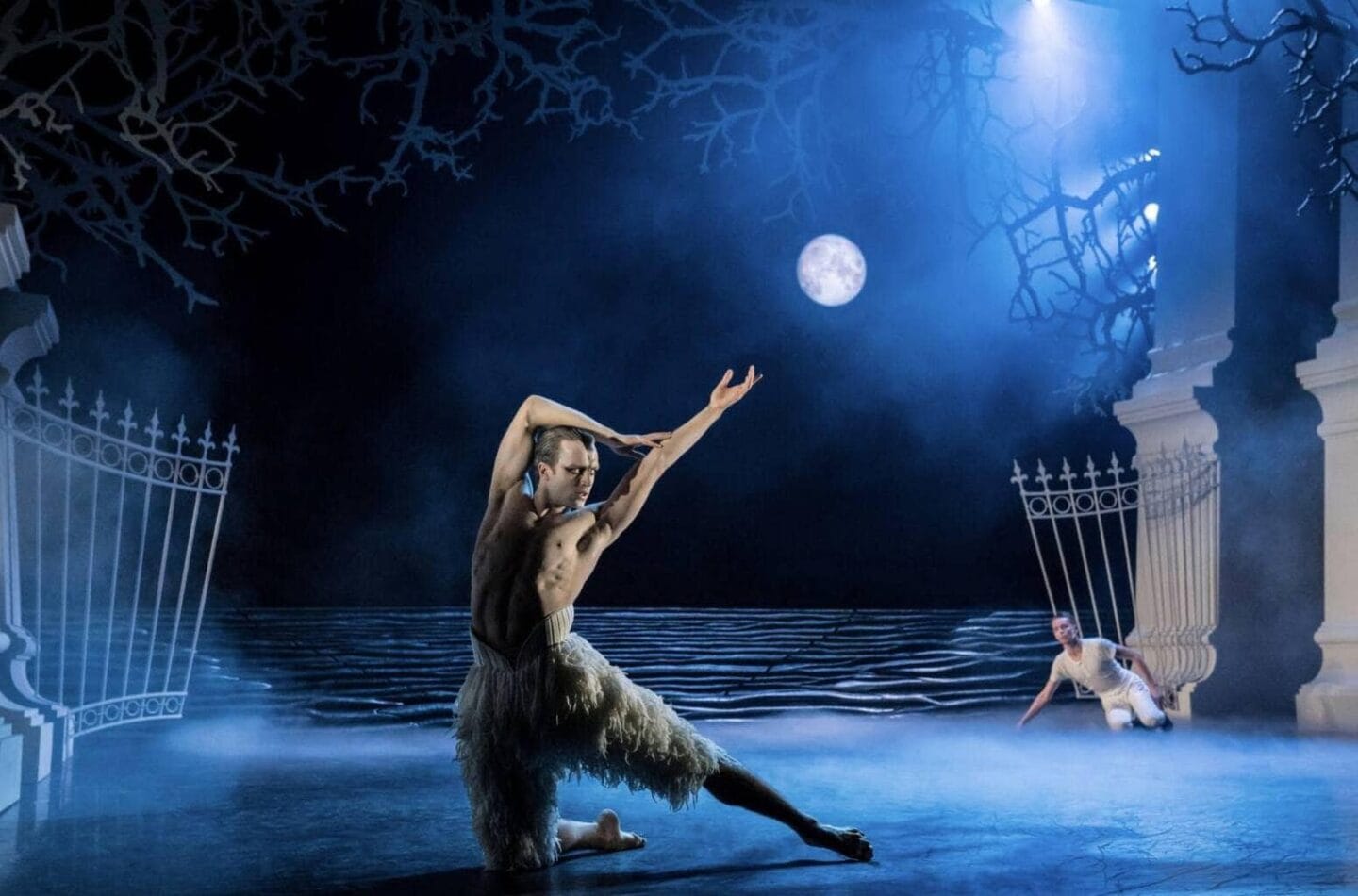 Very depressed, he then goes to the park, writes a note and appears to make for the lake.  This is the point where all previous dancing, and very good it was too, for me gets blown out of the water.  The Swans appear and simply transport you to a different place.  The Head Swan’s dancing was phenomenal.  There was perhaps about 20 minutes of men dancing as Swans which I am sure for some sounds unappealing, however each scene had something different about it; tender and light, heavy and aggressive, humorous, emotional, at one point I was so transfixed I forgot to applaud.   I don’t know whether it’s the body shape of men versus women but they were much more swan-like than previous versions I have seen, they managed to perfectly portray both the elegance and aggression that swans demonstrate.  It simply took my breath away and for me was by far my favourite part of the show.

The second act of Mathew Bourne’s Swan Lake continues with a splendid mix of the whole company dancing at a royal ball, and more swan dream/fantasy scenes, with an emotional finale.  I really could go on and on, but the best thing for you to do is go and see it yourself.

As you would expect the stage set, costumes and lighting contribute enormously to the magical feel of this show – combined with the music – just perfect!

I didn’t see many children in the audience, and I would advise, as with all ballets, that if you are taking children I believe it’s best to explain the story in advance as it can be quite hard to follow with just the medium of dance – I speak from experience here as I was lucky enough to go and see many ballets when I was young, each time I passed an exam.  I would say that the themes are a little dark for young ones, but visit the website and read more about it for you to decide.

As an adult – I can’t recommend this show enough!

Mathew Bourne’s Swan Lake is on at Liverpool Empire until 13 April and is currently touring nationwide, visit https://new-adventures.net/swan-lake for more information.

I’ve never been to a ballet, but this sounds as though it’s something I would really enjoy. You were clearly enthralled!!