Last week, Mini Travellers were invited to ‘laugh in the face of science’ with Brainiac Live at the Garrick Theatre in London’s West End and we certainly did have a giggle.

I arrived with my daughters (aged 7 & 9) at the Garrick Theatre to find an unusual looking theatre-set complete with skull and crossbones signs, TNT, blue smoke and reams of warning tape. We enjoyed listening to my nine year olds favourite tunes, whilst waiting for the Brainiacs to arrive. The energetic Lead Brainiac, Ned, bounced onto the stage with a big smile. Accompanied by flashing lights and the first of many loud bangs, Ned introduced the audience to the Brainiac team; Brainiacs Dave, Ed & Raz. The show comes with many warnings about the loud bangs, and they are very loud, but the entire audience complied and put their fingers firmly in their ears when instructed to.

Based on the popular TV Show, Brainiac Live cleverly uses the weird and wonderful world of science to entertain the audience. The slightly geeky, yet super cool, Brainiacs show the audience just how fun science experiments can be. The first of which being a slightly foolish experiment titled ‘what can you run through’, which, as you might expect, involved Brainiac Ned donning a hard hat and running full pelt towards a wall constructed from wallpaper, followed by plasterboard, and then netting. Science is interjected into the fun with some Brainiac facts about the different properties of the materials. If some light relief was needed after this highly scientific experiment, then the Brainiacs dancing to Beyonce (with leotards) should do the trick. 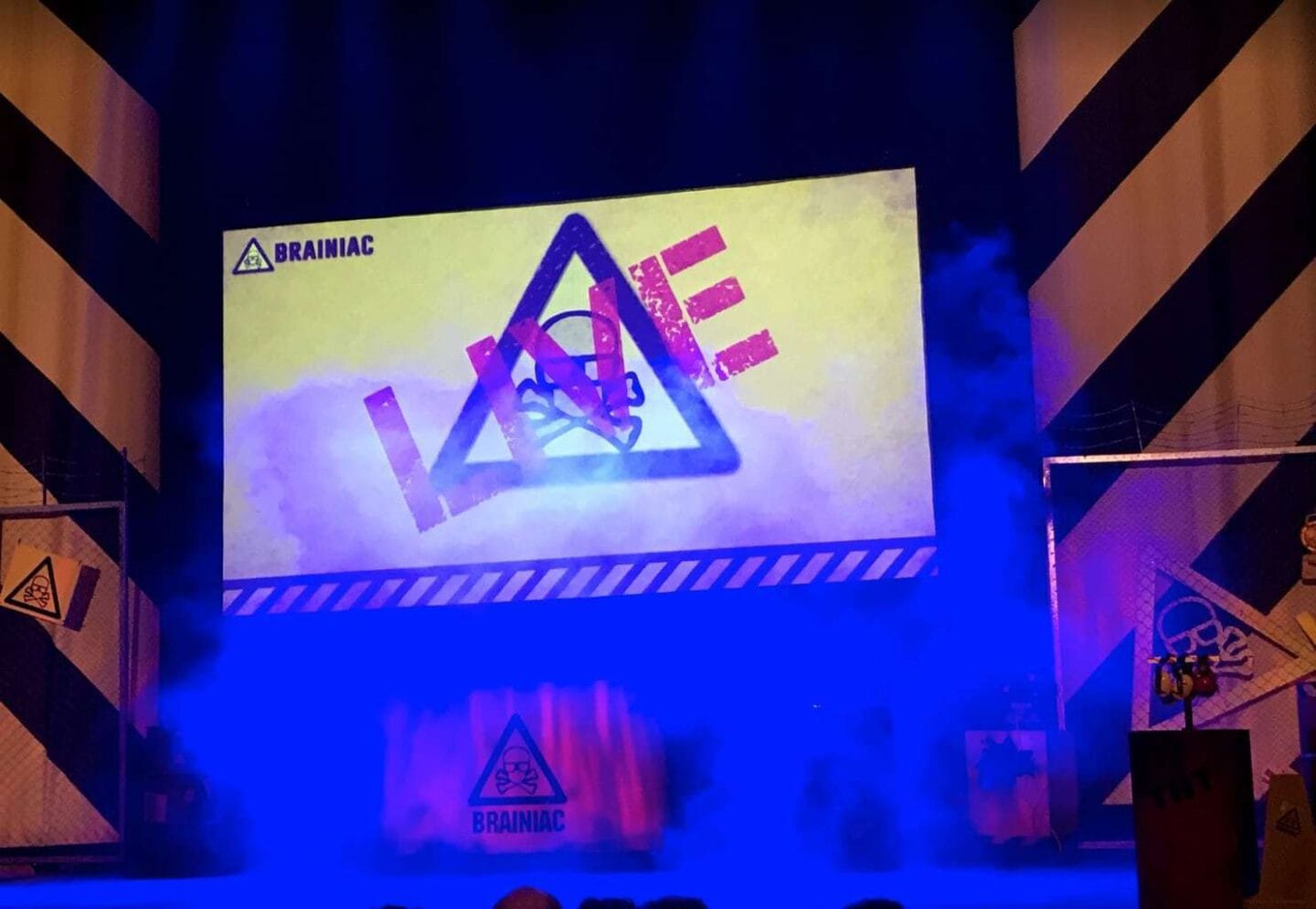 Whilst the Brainiacs set up the next hare-brained experiment, Brainburners appear on the big screen. The audience are audibly-engaged in trying out the perfectly pitched brain teasers and riddles. Brainiac Raz explains that the human ear can often mishear, demonstrated by ‘misheard lyrics’, the Brainiacs hilarious interpretation of the lyrics of well known songs. This experiment culminates in the complete fake-lyrics to the Latin ‘O’Fortuna’, best known as the theme to the X factor, which had the audience laughing out loud.

The next ‘fearless’ experiment included an electric fence – but ended well with all four Brainiacs in one piece and the audience perhaps understanding a little more about conduction and insulation. No science show could be complete without the use of liquid nitrogen, but the Brainiacs took this to another level exploding bottles of liquid nitrogen in dustbins. The high octane action continued with exploding balloons of gas to find the loudest bang, some crazy ways of spinning a revolving chair, and an Airzooka challenge with the winners detonating a microwave on stage. Hoping to inspire the next generation of scientists and engineers, the Brainiacs instructed the children to go out into the world and smash-it, and the audience left full of chatter and excitement.