Ever thought of taking your baby up a mountain? This guest post author did!

We decided to take our little boy Fenn who is 9 months old, up his first mountain, at the weekend. This is a summary of the day with some advice about what you should pack if you’re planning to do the same.

Preparation is key for any mountain activities. Plan your route, start and finish times, make sandwiches and pack the rucksack, all the evening before. On the morning have a quick breakfast then get going as early as possible.

Top Tip – Put everything into colour coded dry bags so you can easily identify what you want and everything is protected from the weather.

We set off at 9am from Seathwaite (parking is free), heading up to Styhead Tarn. The route is quite easy with a good path. I carried the rucksack and Chris carried Fenn on his back in the Ergobaby 360. 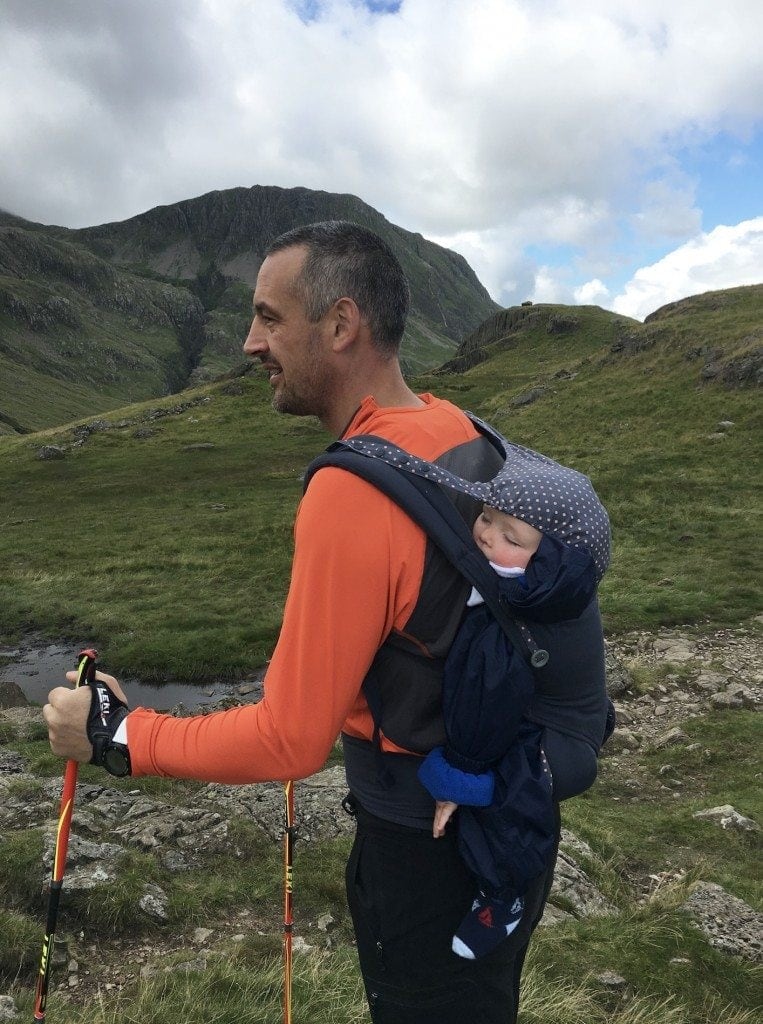 Fenn was dressed in a long sleeved vest, a cloth nappy, socks and his fleece lined waterproof which is big enough to cover his hands and feet. I kept poking my fingers down his neck and up his trousers to see that his temperature was ok. He has a baby buff which we put on and off as needed. That worked better than the hood on his suit which kept dropping over his eyes, making him mad!

The ergo is really comfy to wear, it also has a hood which can be pulled over to protect your baby from the weather, or to support their head when sleeping.

We both used walking poles as we find it really helps with balance, especially when carrying a child, or a rucksack. Once we reached the tarn we stopped for the first rest, Fenn was asleep by this point, so we had a quick sandwich, chocolate and water and set off again. 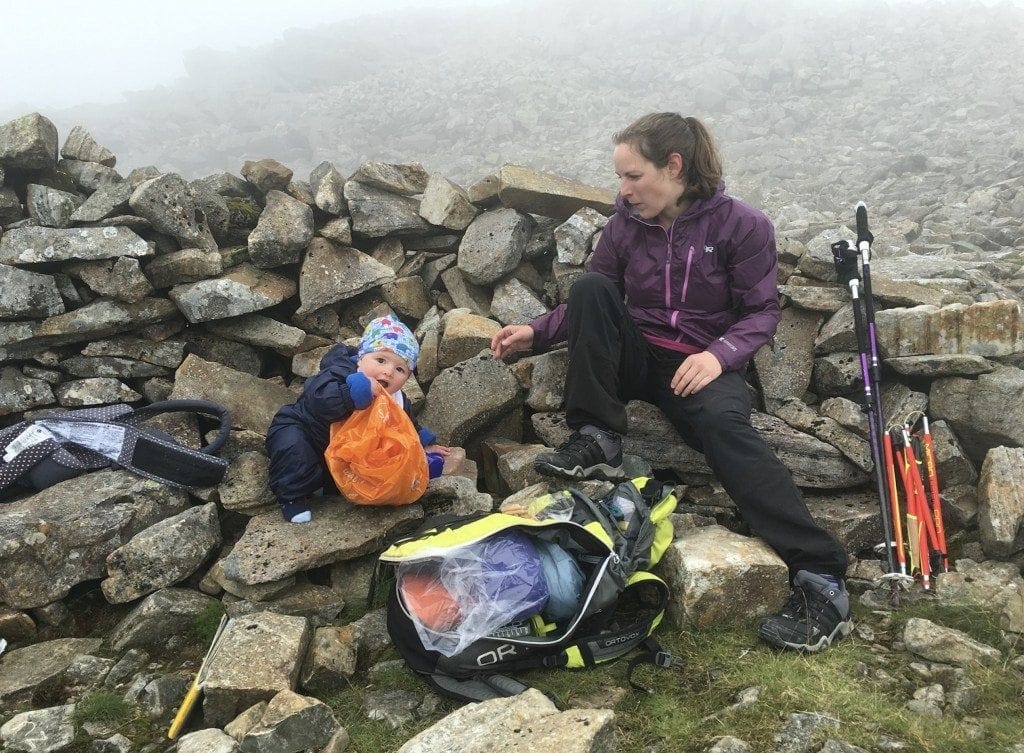 An hour later Fenn was starting to get unhappy so we stopped again, gave him some food, water, a breastfeed, and let him have a little crawl around.  The last slog up to the top was the hardest part, the cloud was low and there was a little drizzle so we had to stop and get waterproof jackets out (this involved loosening Fenn from Chris’ back so he could get his jacket on).

We reached the summit around 1pm, hooray! We got a photo and quickly found a bunker near the summit to sit down. Here we all had some lunch and water.

We decided to do a nappy change too so we got the storm shelter out which kept us all warm. It’s a really good thing to carry because if it’s windy it can be very hard to find shelter and you cool down very quickly in the wind especially if you stop moving. 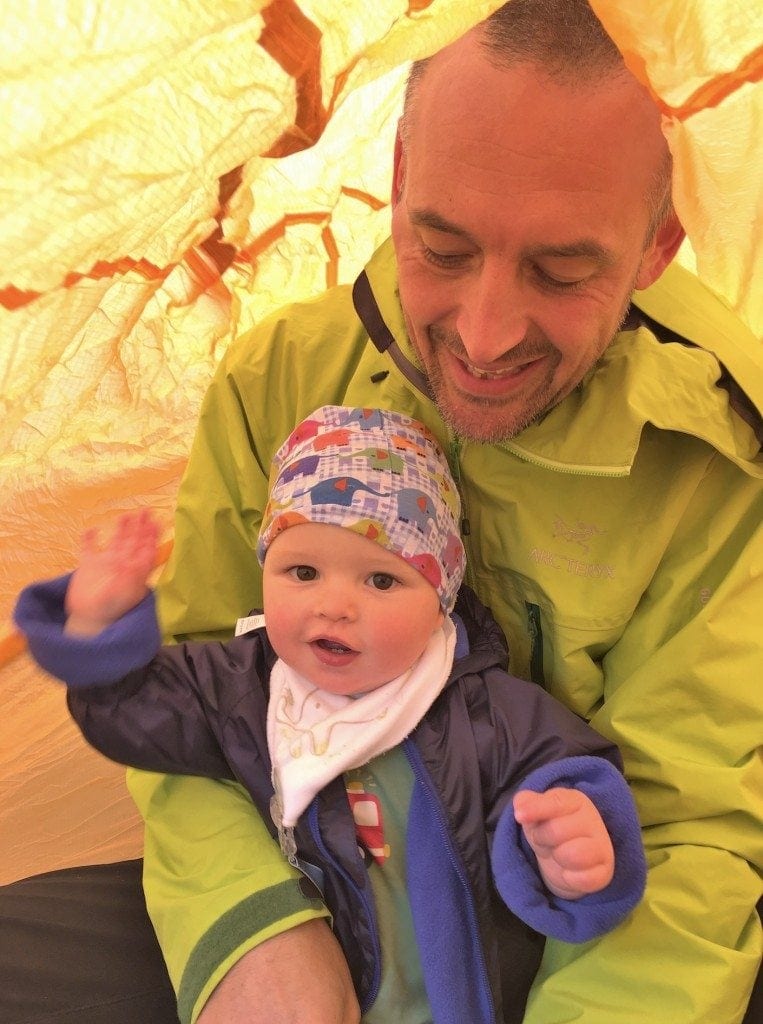 Fenn got a little upset with the wind in his face at this point so we quickly made it off the top, and he fell asleep for the next hour.
We descended below Great end which was quite a gentle decent and arrived back to the van around 4.30pm. There were a couple of extra pit stops in there, especially on the way down!

It was a fantastic day out and we finished it off with fish and chips in Keswick! 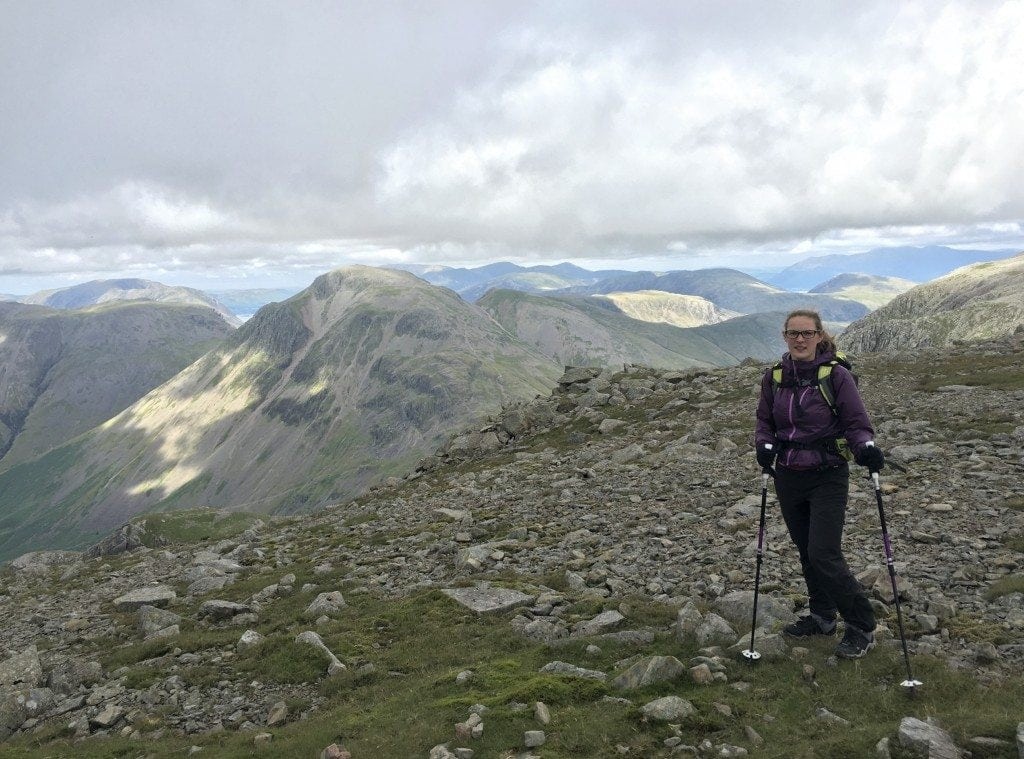 Please note, this walk is not for the inexperienced, it was around 9.5 miles, took 7.5 hours and there was 900m of accent and decent.  Chris and I are both experienced walkers and climbers.