On the 21st August my wife and I set off for the Just So Festival at Rhode Hall in Cheshire with our three children: 2 boys aged 4 1/2 and 2 1/2 and our 10 month old girl. To say I was nervous was an understatement as camping at a festival with three kids under 5 was going to be tough but the activities on offer at the festival sounded so varied and exciting we just had to give it a go. 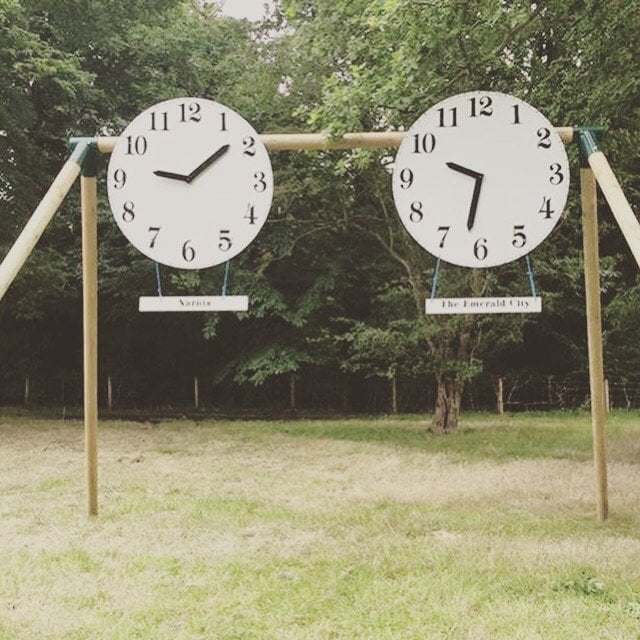 On arrival at the event (which was well signposted and easy to find) there was a little wait to get in but that just added to the excitement and also showed us how big and busy the festival was going to be. The tickets we had were for the whole weekend with camping from Friday afternoon until Monday morning.  The gates for camping opened at 12.00pm and the festival opened at 2.00pm. Once in the grounds of the hall the marshals directed you to the parking spots then it was off to find a place to pitch your tent in the large camping area. Tickets allowed not only tents but camper vans and caravans (you just need to book a pitch in advance). 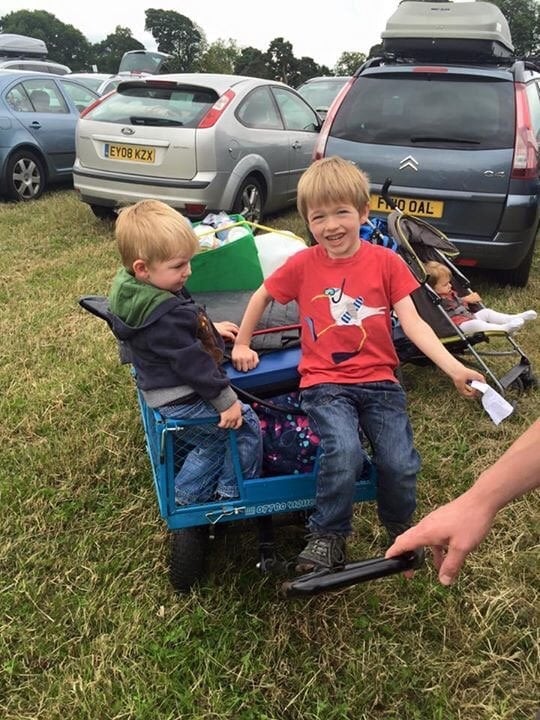 Once we had found a site to pitch our tent it was back to the car to collect the kit. A really good idea is that you can hire a cart/trolley from Mr Trolley who are based in the car park area to transport your stuff. After surviving putting up the tent (without getting divorced) we set off into the festival! A good idea picked up from another blog is to get your wristbands as soon as you can after you arrive to avoid the queues later as the event opened, so I had got ours while my wife carried on putting the tent up (she’s better at stuff like that than me!). 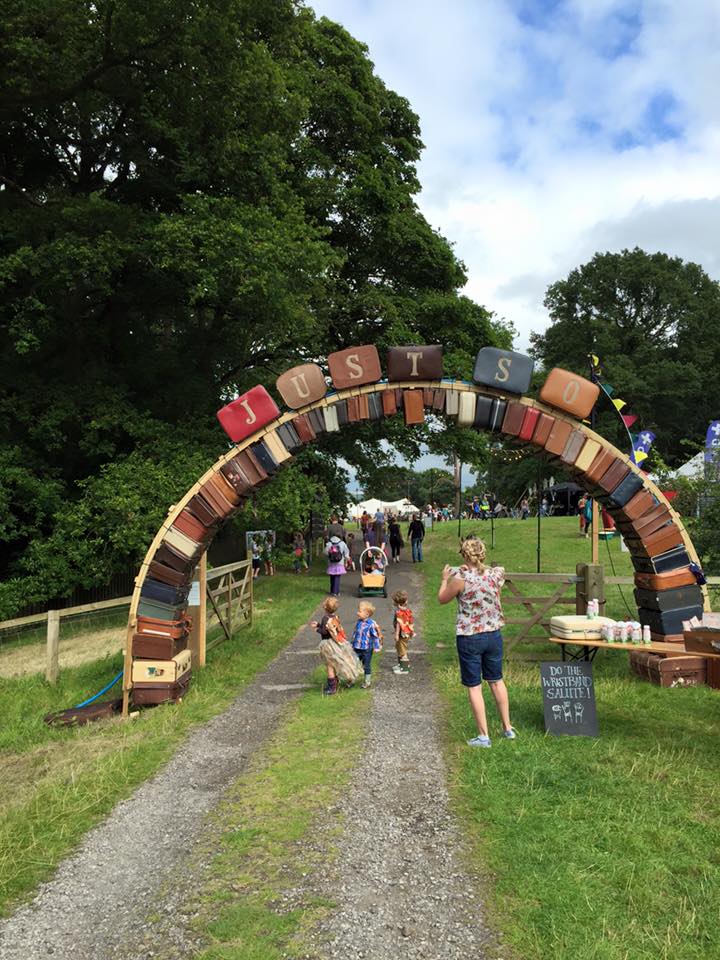 As you went through the entrance archway made out of suitcases it was like you were sprinkled with fairy dust and transported to a magical place far away from the stresses of everyday life. The fun began straight away and there was a buzz of excitement and anticipation in the air for the weekend ahead. The list of events and activities was so extensive that on the Friday we mainly stayed around the large central area and explored there. As you walk into the site on the left is a wooded area complete with fairy trail with little fairy houses and a number of smaller activities like Clay Faces (making faces on trees from clay), toasting marshmallows over an open fire, and magical stories round the camp fire to name just a few. 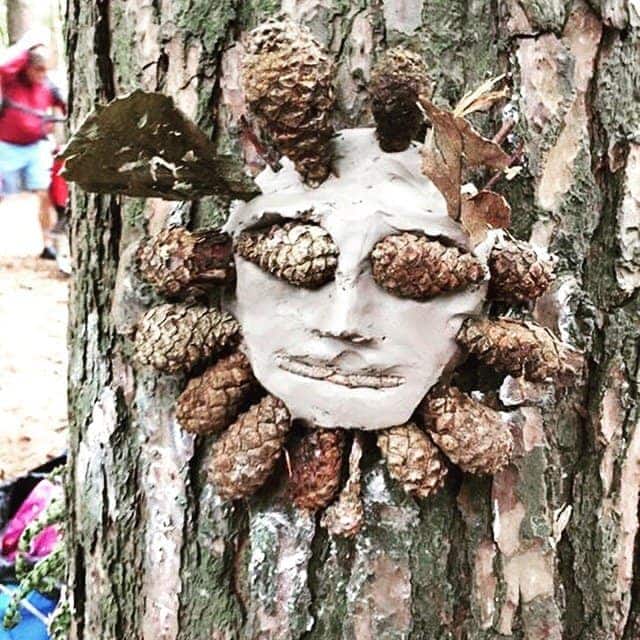 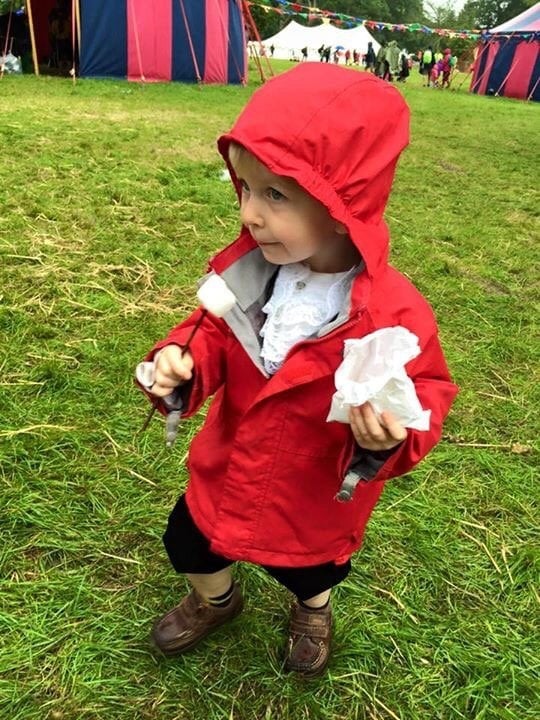 In the central area we saw and had a go at tight rope walking, hula hooping and circus tricks. The Peekaboo zone designed for babies had a changing area, baby baths, feeding tent and some lovely activities like Clay Babies for our little girl which she loved. The main stage was the centre point for the tribal activities – you can choose to join a tribe (all named after animals) and take part in fun activities to score points for your tribe over the weekend. 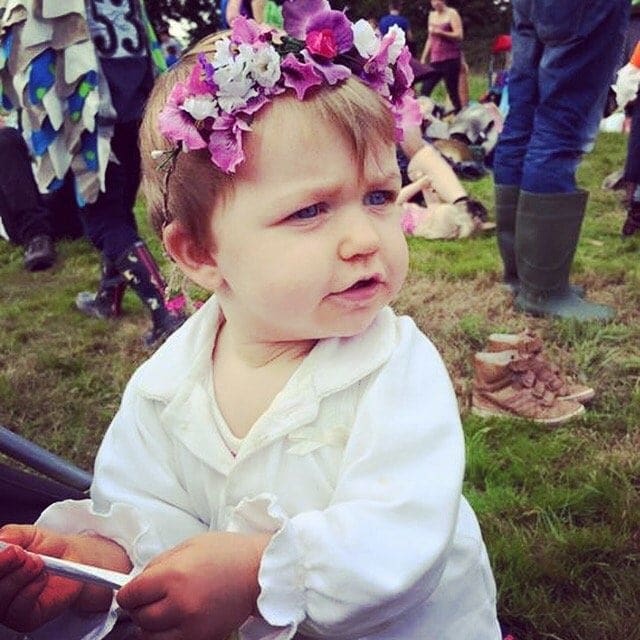 Fancy dress is positively encouraged and we were amazed at some of the fab family efforts we saw on display! As night time fell we settled down to listen to some great stories around the campfire then the two youngest children went back to the tent with myself while my wife took the elder one to watch Mary Poppins on the Silver Screen, which is an outdoor cinema where everyone sits on the sloped hill on a picnic blanket or camping chairs. 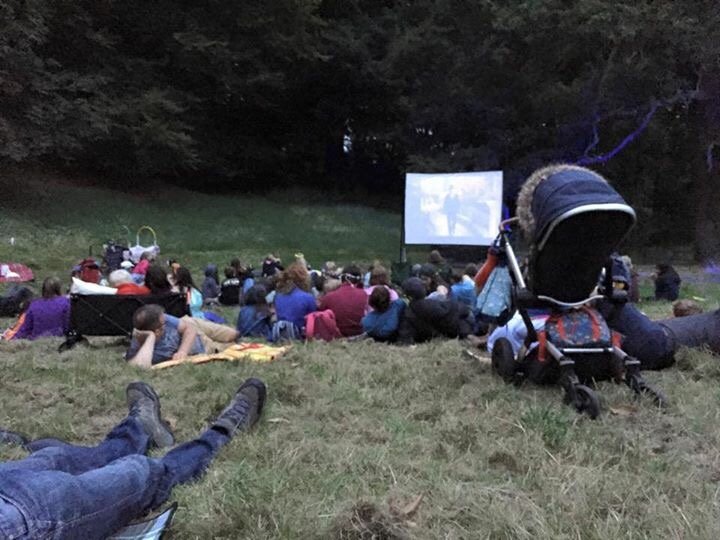 We all flopped into bed that night with visions of fairies and magical folk in our heads and slept brilliantly! There was rain over night and thunderstorms forecast the next day but this didn’t dampen anyone’s spirits. The next morning the smell of bacon wafted around the campsite (unfortunately our kids had to make do with cereal) and we got ourselves ready to go back into the festival. 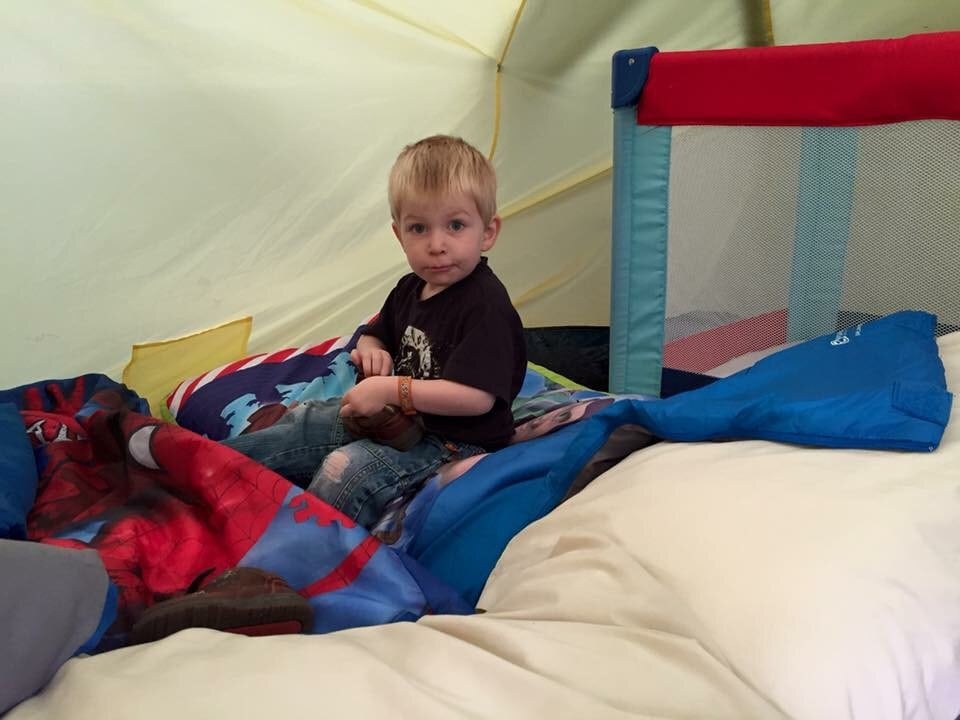 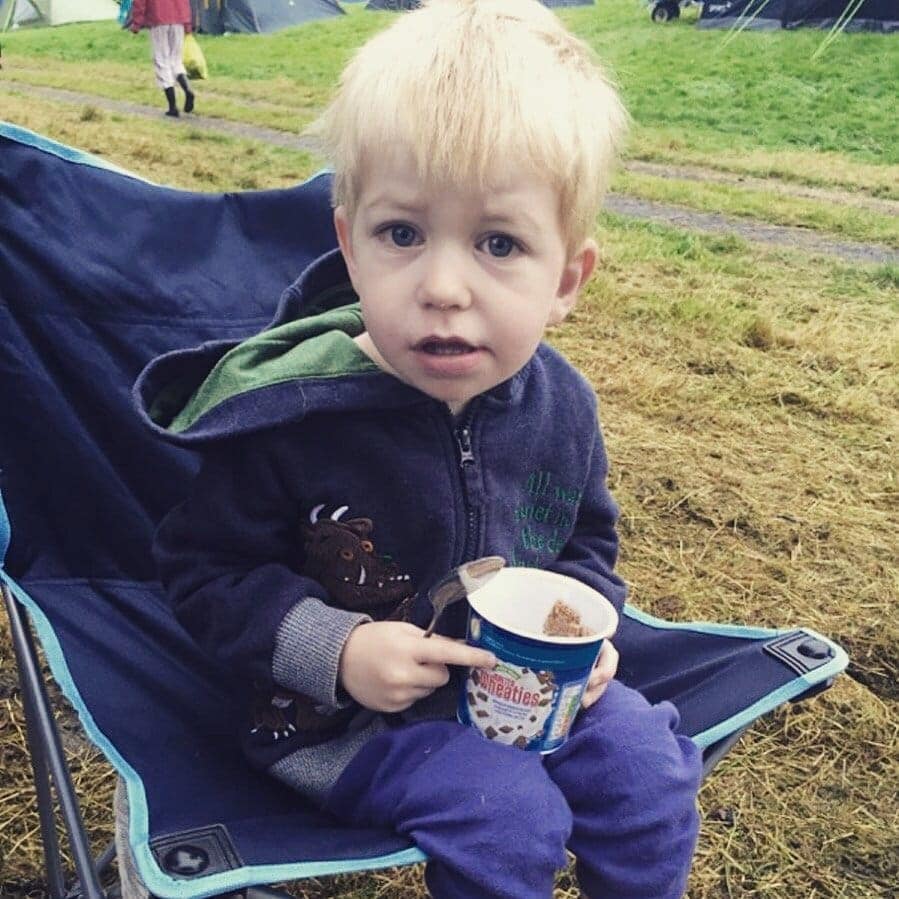 Going further into the site we found a whole new area we had missed out on the Friday. After following the fairy trail deep into the wood we stumbled across another large area complete with a large pirate ship in a large sand pit for all the kids to play in, a giant game of battle ships for the children who played across the field after some pirate training. We stayed there or a couple of hours sampling the wide variety of eateries and baking in the sun with the thunderstorms staying away. 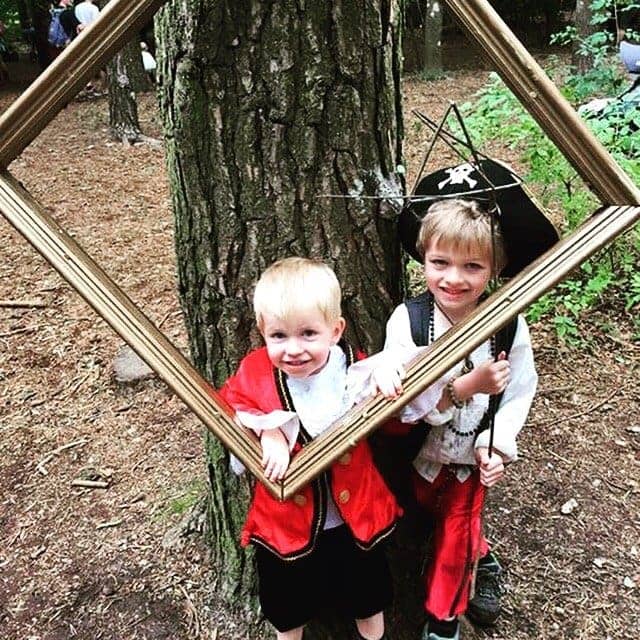 In the afternoon it was back up to the main area for more circus skills, hoola hoop lessons and for the older kids/adventurous adults a parkour training session. As the weather rolled in we donned our waterproofs and in true British fashion the show went on with all the outdoor events moving under trees or into the many tents around the site. We let the kids jump up and down in muddy puddles (and yes we did too!) and ended a long and tiring day eating freshly made pizza and chips in a barn listening to a live acoustic set from one of the many bands who played throughout the day on the outdoor music stage. 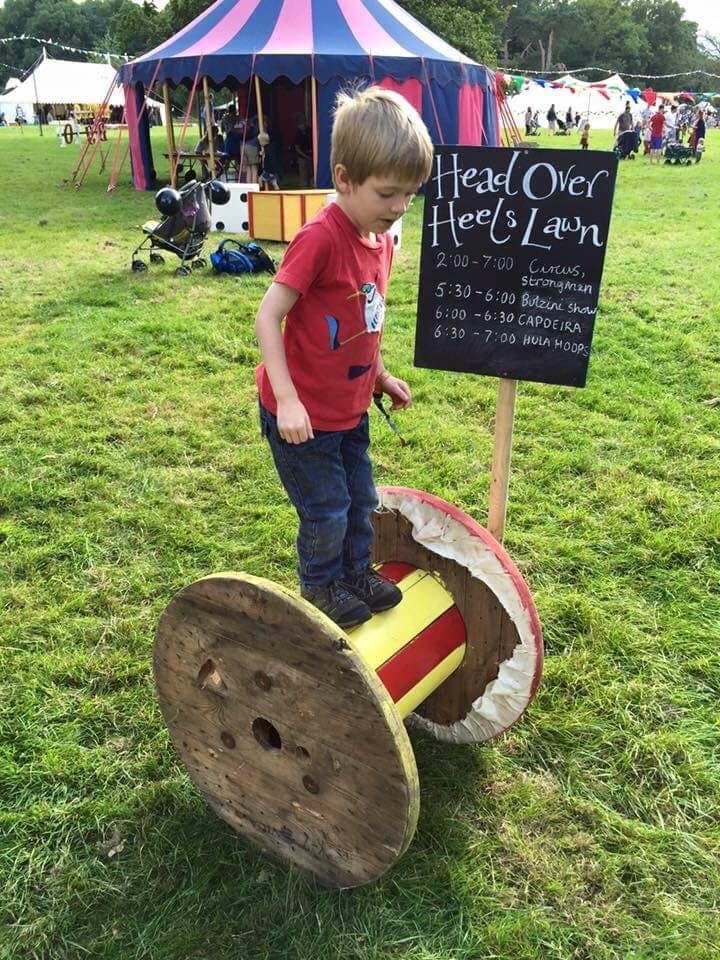 As the weather got worse we retired for the night and hoped for good weather the following day. As we woke on Sunday morning to sun and blue sky we headed back into the site for more fun and craziness. After again visiting the circus skills, which my boys loved, we found a lovely book shop for a bit of quiet time, my eldest completed some art work whilst some of the other guests had a large scale pillow fight gaining more points for there selected tribe. We ended the day doing a bug hunt with members of the RSPB and completed a bug identification quiz. 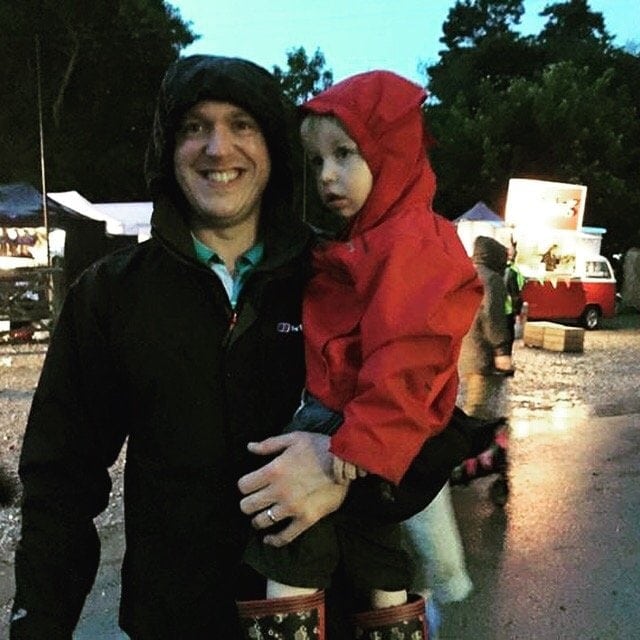 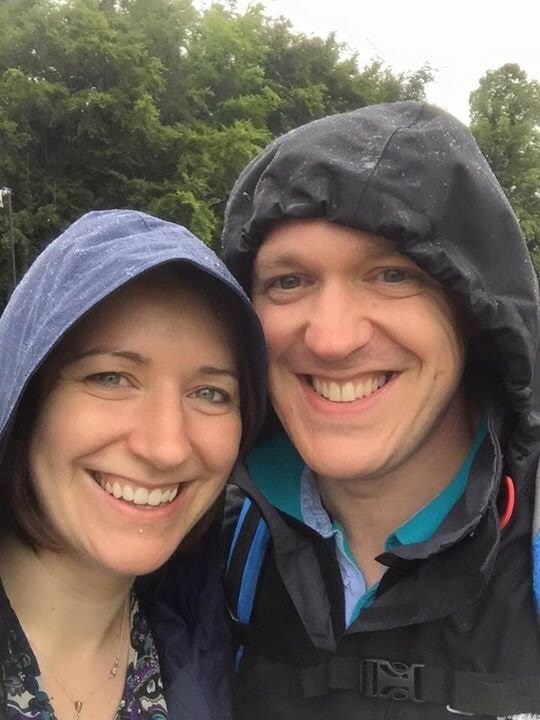 We left the site early Sunday afternoon with three very tired and happy children and two shattered but contented parents. The festival continued until Sunday evening but in truth we had seen everything we wanted to and played hard all weekend. 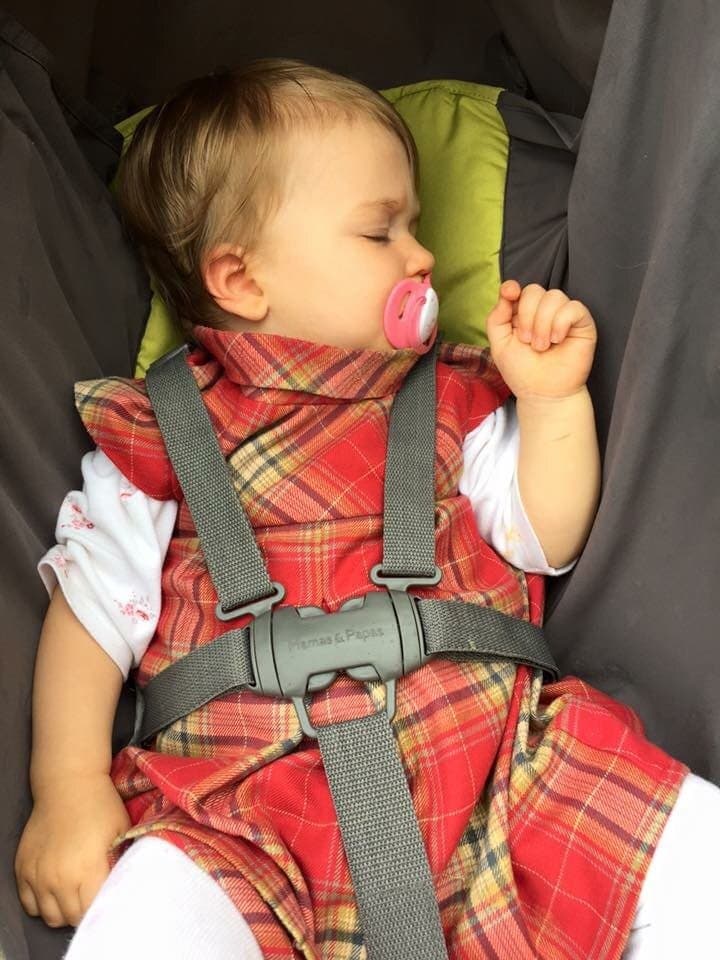 In the car on the way home we reflected and realised that there was so much more to do and when the children are older the experience will probably be even better. We will definitely be returning in the future!

If having read the review you want to experience Just So in 2016 for yourself, why not take advantage of the Early Bird Offer. The Just So Festival 2016 will run from 19 – 21 August 2016. Tickets are now on sale (click here) with early bird prices of £110 per adult and £45 per child for weekend tickets (£125 per adult and £50 per child after early birds have sold out). Under 3s are free.

NB: We visited Just So Festival as guests in exchange for this review, but all views are our own.

Whoa this looks awesome! As a kid, I would've loved to go to something like this festival. Kudos for taking the little ones!

That looks a lot of good old fashioned family fun. Anything that involves marshmallows and campfires has my vote and the outdoor film idea is great. No wonder they were so tired! #MondayEscapes

This looks amazing! I wonder if someone would lend me a small child so I can go next year? ;-) #MondayEscapes

This looks do much fun - definitely the kind of event which might tempt me to camp with my daughter. And I need lots of tempting! #MondayEscapes

What great event for families! It's nice that there was so much to do for your younger kids. Ours are both under three and I worry about there not being enough aimed at them at festivals but it sounds like that's not a problem at all at Just So #MondayEscapes