On booking, we were assigned a one-hour slot and advised to arrive 30 minutes before for a safety briefing. We arrived 15 minutes before (I’m always at least 10 minutes late for everything), which was more than enough time to queue up, be given a wrist band for our slot and then queue up again to be let into the arena. The ‘safety briefing’ consisted of some basic instructions on a few screens positioned along the queue, which were all pretty much common sense. You’d need to read them out to young children yourself – probably less effective than having a non-parent giving out instructions, as my children tend to tune out when I’m in teacher mode!

On the dot of our allotted slot, we were let loose into the Inflata Nation arena. I had expected it to be much bigger than it actually was – and describing it as a ‘theme park’ is something of a stretch. It’s a lot smaller than a typical trampoline park. It was essentially a giant bouncy castle, with 6 or 7 different areas of activity dotted about and a member of staff manning each one. 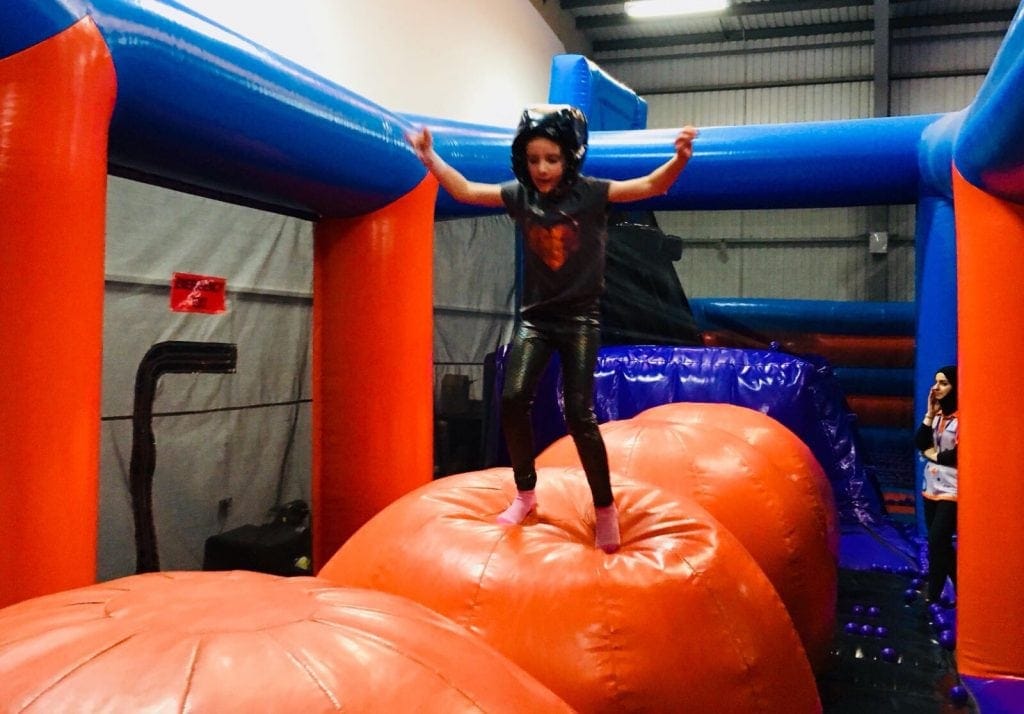 The first was a Ninja Warrior style obstacle course consisting of 4 or 5 giant inflatable balls. After donning an inflatable helmet, you climb up some inflatable steps (extremely difficult to navigate if your feet are bigger than size 4 and you’re heavier than a child!) and then leap across the balls to the other side. This was a favourite of our kids and they spent most of their time on here after trying out everything else. Next was a near vertical inflatable slide, which was great fun, although not for the faint hearted as it’s pretty fast. In the same section was another curved inflatable slide. There was a member of staff manning the slides and making sure there weren’t too many people let on at the same time. He also warned us to make sure we crossed our arms over our chests as we went down, to avoid friction burns (and showed us a scar he had on his arm to prove his point).

The first time my 7 year old daughter went down the curved slide, she came off with a large friction burn on her elbow. She had crossed her arms she said, but the slide was so fast that she’d probably moved her arm involuntarily. They do advise you on the website to wear long sleeves and trousers, although they don’t say why – now we know! I took her to a member of staff, who was very sympathetic but not at all proactive. I had to ask for a plaster and she didn’t seem to have any idea how to treat a friction burn, which I thought was odd given that it must happen regularly. 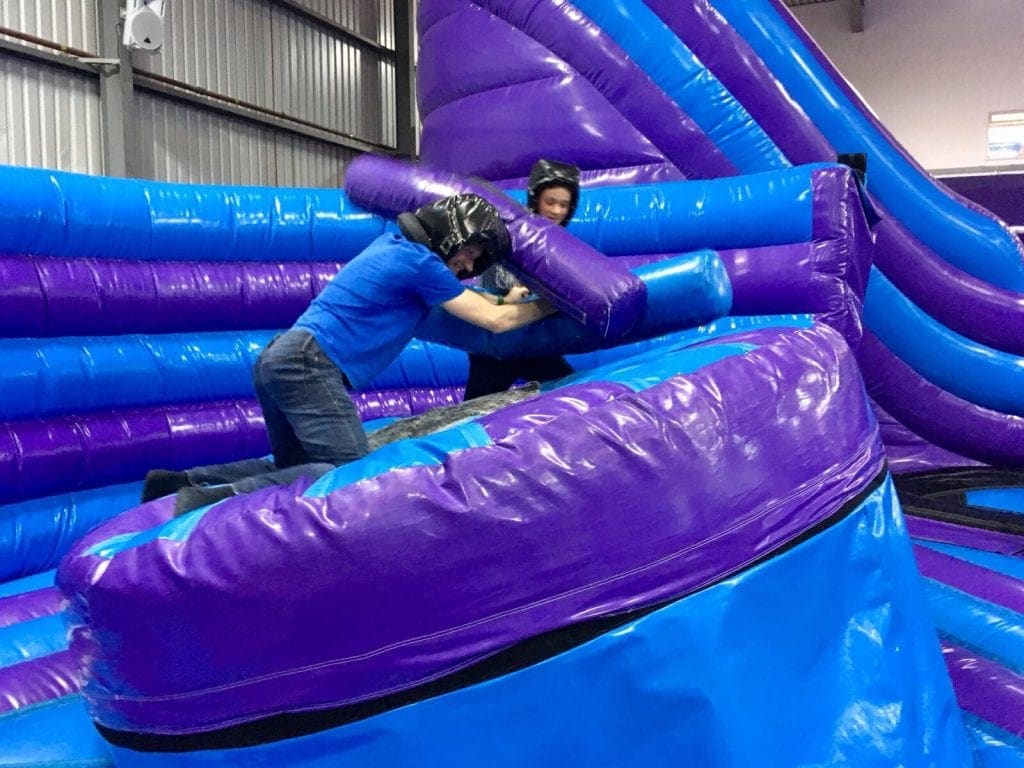 There was a combat area, where two people climb onto a moving platform armed with inflatable batons, and try to knock the other off. We had lots of fun doing that, and the kids thoroughly enjoyed knocking Ed and me off repeatedly. Next to that was a short assault course where you could race an opponent through inflatable obstacles, ending up at a small inflatable slide which pops you out into what is apparently the UK’s largest ball pool. It was an impressive ball pool, as ball pools go, although the balls ended up all over the rest of the arena which (as someone who has recently recovered from a stubborn ankle injury) made me a bit nervous. There was an inflatable climbing wall at one side, but the foot holds were difficult to climb up, so we abandoned that after a couple of tries. There’s not much space between the activities to bounce, and as people were running about between areas, I found it quite difficult to stay on my feet. 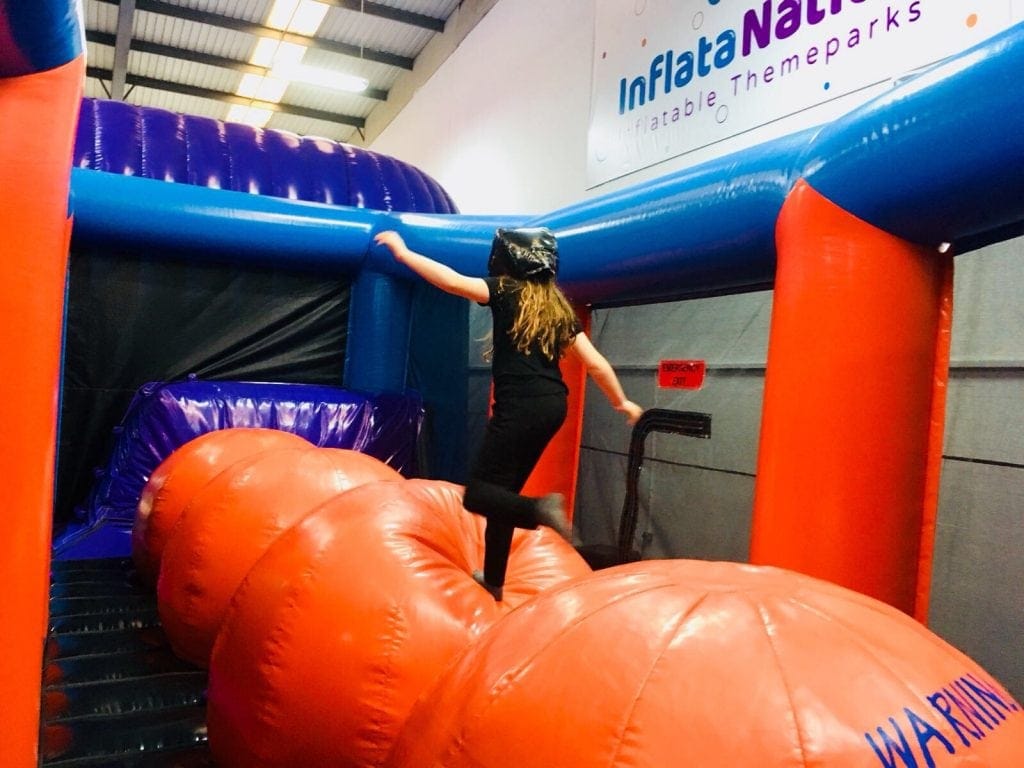 Inflata Nation allow only a set number of people into the arena in each slot, so whilst it was relatively busy, it didn’t feel overcrowded. It was pretty hot though and we were in t-shirts, so I think better air conditioning would be good if customers are being told to wear long sleeves.

The inflatables were fine for our kids, who are 11, 10 and 7, but I would say that anyone younger than 5 or 6 wouldn’t be able to enjoy it fully. I saw a woman with a boy of about 3 or 4 who was struggling to really go on anything, as he couldn’t navigate the inflatable steps up to the slide or the giant ball obstacles, and was having trouble even standing up on the inflatable floor when older kids charged around him. There is a separate section for the under 4s, but it’s very small and you can’t see it from the main arena so a parent or carer on their own couldn’t supervise older and younger children at the same time.

There’s a café there, on two levels, so you can sit and watch your children if you can get a seat towards the big glass window. We didn’t eat or drink there so we can’t vouch for the food, but it looked very busy. 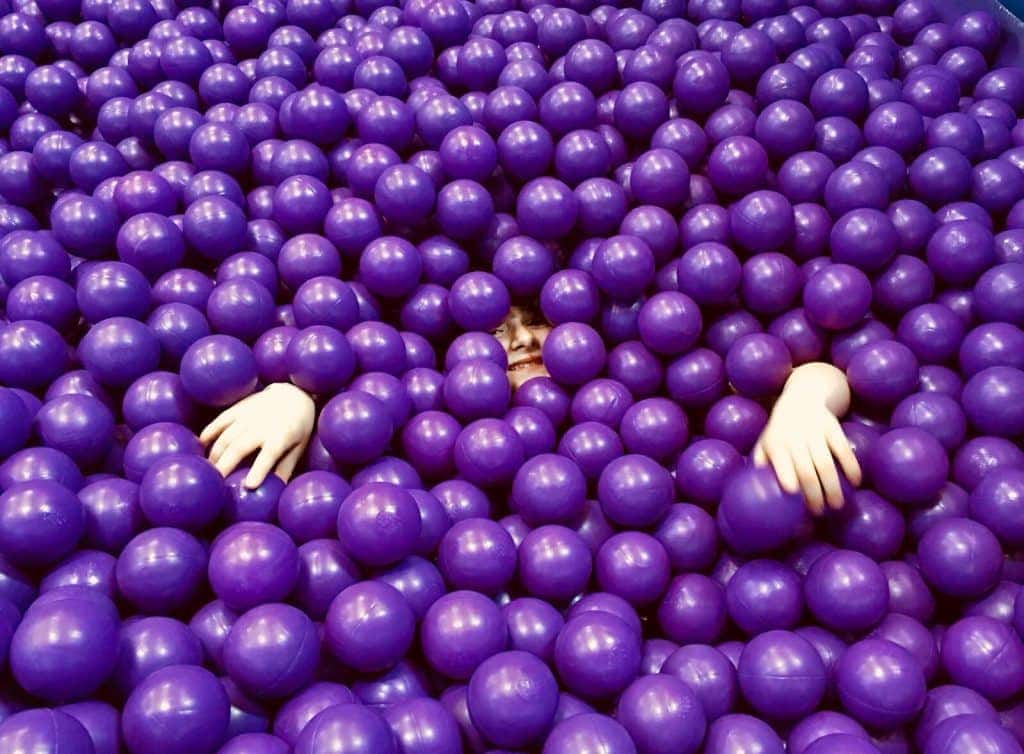 The kids’ verdict was that they enjoyed it, but they (and we) like trampoline parks better and, at £50 for a family of 5, it feels pretty pricey for an hour’s entertainment. In summary I’d say Inflata Nation in Trafford Park, Manchester is NOT worth the money

Jane and her family were given tickets to Inflata Nation but all views and opinions are Jane’s own.