This review about visiting Santa at Harrods is by Mammy Flynn who writes a blog called Fun with the Family which you can read by clicking here.

Last year we visited London for the first time and my mission to see a lovely Santa Claus had been set.  I did a LOT of research, one very well known store (not mentioning any names) was charging £45! and that did not include photographs, you had to pay extra for those! Crazy money! I looked at Harrods expecting the worst, but it turned out to be the very best option! Who would have thought! To see Santa, you need to join their free Harrods Reward Scheme which works just like Boots and Tesco’s cards, each time you spend points are loaded onto the card.  You then pay a £10 admin fee, but and here is the amazing thing! that £10 is loaded onto your Rewards card so after you visit Santa you then can spend the £10 in store, fantastic (although we did spend quite a bit more than £10!). You book a time and date to suit and they email you confirmation, job done.  Last year I had discovered this a bit too late and the slots for the dates we were in London were full.  I decided to chance it and emailed them explaining that we were travelling from Newcastle etc and lo and behold, a couple of days later they phoned to offer Eva a space! Fabulous! Anyway enough waffling and on we go to this years visit.
Our allocated slot was on the Sunday at 12.30 and we arrived at the store for a browse about half an hour early. They set up a Disney Store surrounding the Grotto early in November and it is any little girls dream (some of these pictures are last years, we had a camera incident!)

As you can imagine, this is a little girls paradise, Eva was allowed to choose a couple of things for an early birthday present off Nana, the prices are more or less the same as in the normal Disney Store although the range is limited to more of the expensive items.  She chose an Elsa doll from the film Frozen and a singing Sofia the First doll.

Onto more pressing matters, our appointment with the big man was drawing nearer so we went to the desk where we were greeted by very friendly staff and a couple of elves.  We were then shown into the library and met a lovely Butler by the name of Goodwill! He handed Eva a passport and told her to collect stamps from everyone she meets and she would then be given a gift from Santa.  We made our way through the library and I have to say we had picked the perfect time to go as apart from one or two other families, we were the only ones in there! We met some very colourful characters on our journey, some jolly elves and even the Sugar Plum Fairy! My daughter is very shy but they all took lots of time with her to chat and make her laugh, they were all wonderful and the costumes were fantastic! 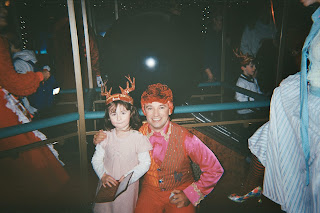 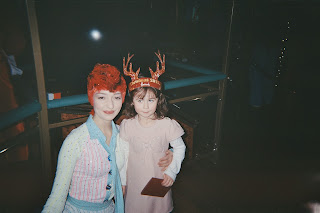 We finally reached the door to Santa’s room and the funny elf took her name and led us through the magic door.  Upon entering Santa’s room he greeted her instantly by name! She was amazed!  Santa was just gorgeous, everything you expect him to be, kind and jolly and had lots and lots of time to spend with Eva asking about not just what she would like for Christmas but lots of other things too.  She told him about her little brother and had some beautiful photographs taken.  She got her final stamp in her passport too from Santa. 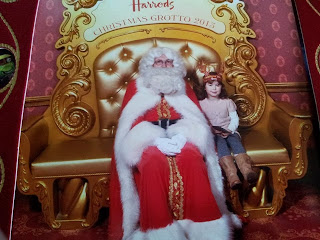 Time for gifts! She got a lovely little story book about Henry who was a forgotten Harrods delivery van from long ago, that was until Santa found him and needed his help.  She also got a badge and a chocolate, lovely Santa also gave us a set for Luca which was very kind indeed.  Absolutely enchanting.

Once we had said goodbye to Santa we went out into the library corridor to find our way back into the store to pick up our photographs and a few more treats for those we had left at home!

The entire experience from start to finish was just magical, they have worked so hard on details (and many improvements from last year) to make it an experience not to be forgotten.  I have to admit to being a little tearful watching her little face as we went on our little journey.  If you get the chance, do go, its wonderful.