Last weekend, the five of us (me, Mr G and our boys aged 7, 4 and 8 weeks) travelled up to Scotland for a Family Weekend in Glasgow for a couple of nights. My eldest son has always been a massive AC/DC fan and we’d managed to get him tickets to go with my husband to see them at Hampden Park so we thought we’d make a weekend of it and spend some time exploring the city too.

We stayed slightly out of the city itself, in the Premier Inn at Newton Mearns. It is only around 15-20 minutes away, but much cheaper than a city centre hotel. With the kids, I often find it better to stay somewhere slightly quieter anyway – my party days are behind me and other people keeping the boys awake doesn’t appeal!! The hotel was exactly what you’d expect from a Premier Inn – clean and comfortable with good service.

Once we’d got checked in, we headed took the boys to Greenbank Garden which is a National Trust site around 5 minutes from the hotel. It was a perfect place to run off some steam after a long car journey. There were a few toys on the lawn, but we mostly ignored them in favour of a big game of hide and seek! The gardens were very well kept, the boys enjoyed having a look at the different sections and I would definitely go back when we’ve got more time to take a look inside the house too. There is a small cafe and shop, but we didn’t visit those this time.

That evening, Mr G and our biggest boy headed off with big smiles to the concert. From what I gather, it was amazing and I missed a treat… I’m jealous and a week later I’m still hearing about Angus Young’s epic guitar solo! 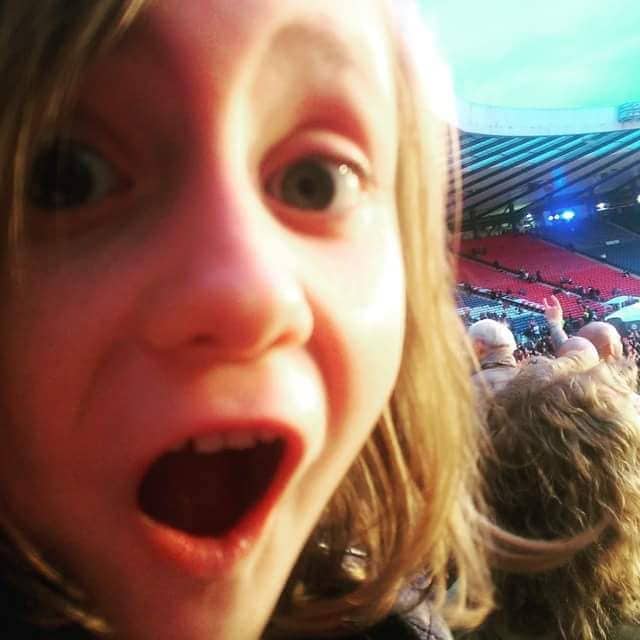 The following day, we decided to check out the Riverside Museum expecting to head on to somewhere else later. We ended up staying for pretty much the whole day as there was so much there to see and do. I’ve been to A LOT of museums with the boys and this one was definitely up there with the best. The exhibits were interesting, there was plenty of interactive stuff to keep them engaged and in terms of the boring parent stuff; the facilities were good, there were tables to take your own food and the cafes weren’t expensive and had some healthy choices. Parking was only £1 for 4 hours too so very good value.

Alongside the museum, there is a Tall Ship which is also free to enter. We bought the guide book and I’m glad we did as it contained a treasure hunt for the kids which kept us busy! We had lunch in the cafe on board (only £3 for a kids’ pirate lunch box including sandwich, crisps, chocolate and drink) and the boys spent some time in the small soft play area too.

Outside the front of the museum was a small ‘beach’ set up with plenty of deck chairs for parents and buckets and spades for the kids. We managed to get there just as baby was napping and big boys went off to play so time for us to sit and chill in the sun for a while…. bliss!

After that, we headed into the city centre to have a look around. I was very impressed with the range of shops and restaurants. After al l the time spent at the Riverside, we hadn’t got long in the city itself so we will have to come back and have another Family Weekend in Glasgow soon.

sounds like a lovely trip - my hubby, bro and stepdad went to see ACDC in Glasgow too and it sounded amazing. You can't beat a NT garden for a family day out!