Skip to Content
1 shares
A guest post about Eurocamping in Paris with children by Catherine of Head in a Book who blogs at headinbooks.wordpress.com and can be followed on twitter @headinbook
This really is what it says on the tin. It’s therefore a bit of a departure from my usual blogs! I have meant to post it for a while, though, and a Twitter conversation tonight reminded me to do it in the hope that someone else finds it useful.
We have been to Paris twice now with very young children (the first time, with a 3.5 year old and a little girl who turned 2 the day before we arrived); the second with three children who were 2.5, 6 and 7.5 respectively. Both times were in August.
We’d visited Paris several times before having children, but the first time we went with them we were breaking our journey en route to visit family in Switzerland. We – and everyone we mentioned our plans to – thought that we were slightly mad, but it made sense in terms of our drive, and after three and a half years of our entertainment being almost exclusively soft-play based, we thought we deserved to at least try it. It worked so well, that when we were going to a family wedding in central France last summer, we decided to repeat the experiment with an extremely fidgety toddler.
So – not a full itinerary, but a list of ideas and things that worked for us. If I was a proper blogger, I would do you a map. As I’m not, you get a slightly scruffy list instead!
We stayed both times with Eurocamp at a campsite – Paris International – in the suburbs; getting the RER in each morning. This worked well, because for the price of a cramped hotel room, we had a large static caravan with separate bedrooms and our own outdoor space. The campsite is on an island in the Seine, with a small playpark, and it’s an easy walk to the station and the pretty suburb of Maisons Lafitte itself with its cafes and supermarkets. Staying on a campsite meant that the children had some time and space at the beginning and the end of the day just to let off steam. The added bonus was that the journey in was almost entirely overground, and gave us some fantastic views of La Defense.
The RER was quick, easy and cheap and delivered us into the centre of Paris without needing to change. Our children aren’t used to public transport because it doesn’t really exist where we live, and they didn’t like the darkness and the ticket barriers in the Metro. The system as a whole is also difficult with a buggy (we took a small folding one, but carrying that on stairs while holding children’s hands is difficult). We kept our journeys therefore to a minimum: travelling in each morning, but planning our days from that point on foot.
On our second trip, we invested in Batobus tickets, which let us travel easily between the main sights and also gave us plenty of opportunities to let the children sit and rest while enjoying the novelty of travelling by river.

We spent ages here, playing with the small sailboats on the lake – which can be hired at the cost of a couple of euro for half an hour. 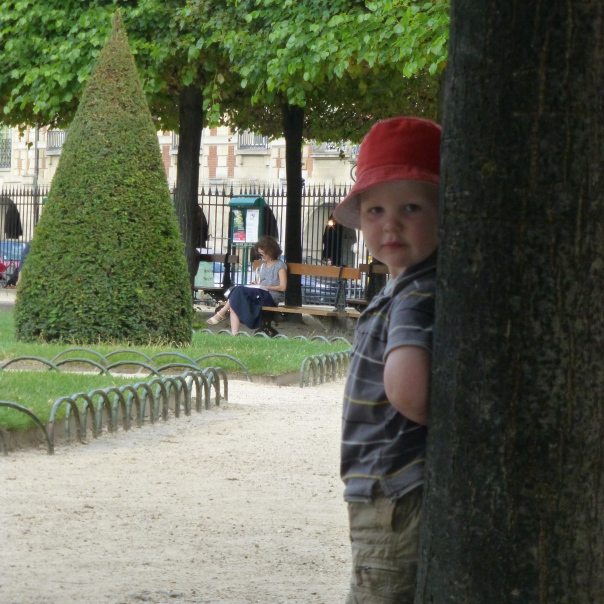 There is also a lovely little play area there called Poussin Vert, where they would happily have spent the whole day. For a small entrance charge, there was access to a beautifully kept, extensive range of equipment, all of which was under shade with a cafe, loos and seats aplenty.
We did consider talking the children inside, but decided against it. They enjoyed just seeing the buildings, the pyramids and playing in the fountains, before wandering over the nearby Pont des Arts and looking at all the autographed padlocks attached to the railings as symbols of love and friendship. For two children fairly new to reading, there were hours of fun to be had (the toddler was less keen on this bit). Luckily for him, we were right next to the Jardins des Tuileries where there were more lakes, endless paths to run along and a noisy, colourful fairground with old-fashioned carousels and toboggans. Public toilets too.
It’s busy outside, but there’s lots for children to see and take in. Again, we didn’t go in (the second time the whole area was undergoing massive building works, so it’s worth checking), but there was another fantastic, free playground right next door.
You can’t avoid it, even if you want to, but the first time we just picnicked nearby in the Jardins du Trocadéro, which were a bit quieter and gave a fantastic view. 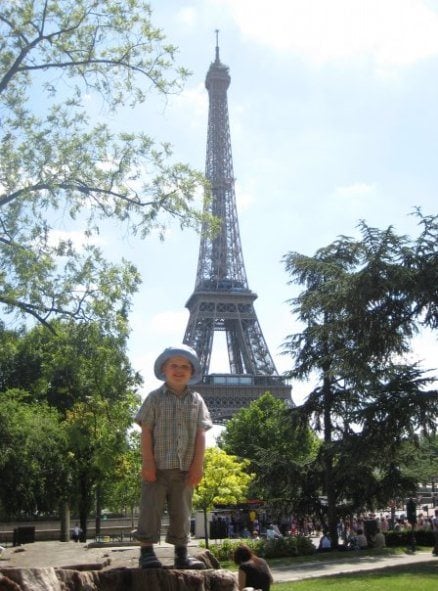 On our second trip, my husband took the older two up the fourth tower on foot, which was cheaper than the lifts and didn’t have long queues. They didn’t make it to the top, but got high enough for some good views! There’s also a lovely little playground tucked away in the Champ de Mars, five minutes or so away.
We got here on the Batobus. Again, we didn’t go inside, but the children were happy to sit for quite a long time on the stepped platform outside, seeing who could find the rudest gargoyles through the camera zoom (best made-up game ever, by the way) and watching the street theatre.
A twenty minute walk away, this was another favourite; a hangover of child-free trips in the past, but one which worked surprisingly well. Under deep arcades, there are fabulous shops for window gazing, lots of opportunities for ice cream, buskers and street artists and mystery aplenty. On our second visit, my eldest and I sloped off to explore and found a whole hidden palace down an alley. I think, strictly speaking, it is some government office now, but when you’re (thirty) seven, it’s much more fun to imagine you’ve stumbled across a forgotten court of musketeers and cardinals and princesses.
There are also fountains, grassy lawns to lounge and play on, and lots and lots of play park equipment on sandy bases under shady trees.
What worked for us was taking things at the children’s pace. Lots of walking, yes, but lots of stops to play too. We “did” most of the famous bits, but they were the backdrop to our days rather than our destinations. Architecture, art, grand designs: they are always going to pass most children by, and in Paris, in the summer, the crowds and the heat can be frightening and overwhelming.
We weren’t showing them Paris, we were watching them see it. Go slowly, drop your sights and find the beauty of the city which hides in small corners as well as in the great famous places.
by Catherine
Click here to cancel reply.

I have a toddler who I would love to take to Paris. I was looking into the option of Eurocamp just recently. Thanks for a great wrote up - will definately go ahead and book now!

Brilliant glad that it's helped.