It seems that these days just meeting Father Christmas is not quite enough, there has to be some sort of experience attached too. Knowsley Safari Parks version is “Enchanted”, an evening event after the traditional safari experience is closed. We went along last Saturday and it is actually rather good!

My children are 5 year old twins and still firmly believe, so anything vaguely Christmas related is already winning in their eyes.  They are also rarely out and about after dark, so to set off to a safari park at 4pm, with the promise of a meeting Santa whilst we were there, was an adventure before it had begun!

You arrive for Enchanted at the main safari gates and check in in the same way.  We were then efficiently directed to the car park, where parking was plentiful and free and once we had wrapped up warm (being a safari park it is obviously open to the elements) we were ready to explore.

We had booked a 5.45 slot with Santa and arrived about an hour before this, to give us time to explore the enchanted forest, which was probably just about right.  The “forest” was delightful.  It basically follows the path of the day time foot safari, but because it is dark and the animals are presumably sleeping somewhere else, it takes on a whole different feel.  It is beautifully lit with projections of snow flakes, trees full of stars and stunning illuminated animal sculptures; “gentle” Christmas music is playing; and as you meander around, actors dressed as various birds and insects (think ballet costumes, sparkly facepaint and wings with fairy lights rather scary realistic insect heads!) are dancing around, happy to chat, show off their costumes and pose for photos.  Then about half way around there is a pit stop where you can toast marshmallows on open fires (all very safely and well supervised), and, as it should be, but rarely is at these things, this is included in the price, with the staff very relaxed if someone drops theirs and needs another etc. 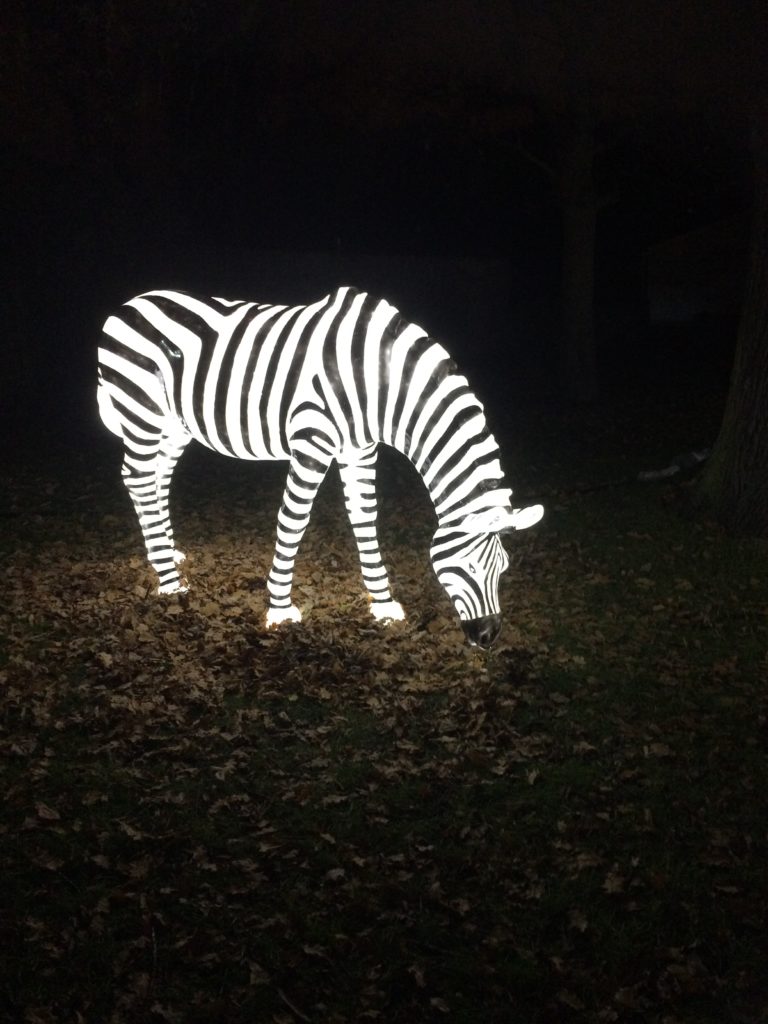 At about 5.30, we then headed to find Santa’s grotto.  It was just a stones throw from the forest walk, but does involve going through the fairground rides section.  These are obviously not included in the price, but are actually quite reasonable at just £1 a ride (with adults able to ride for free if your child is under a certain height or needs company) or you can purchase an £8 per child wrist band which gives you unlimited rides.  We hadn’t come to go to the fair and looking at the amount of rides my children would like, I didn’t think we would actually want £8’s worth anyway, so I just bought 3 tickets each, which they were quite happy with and they had one merry go round ride and a look at what they would go on afterwards, before we went off to see Santa.

Santa’s Grotto is outside the restaurant.  We got there just before our allotted time and I was  surprised to see there was quite a long queue.  It was a good five minutes or so before we were inside the grotto entrance and then probably another 20 minutes before out actual turn, so perhaps they need to work on their time slots, but the children didn’t seem to mind!  The entrance itself was decorated beautifully, with an illuminated “flying sleigh”, Christmas trees, snow, giant baubles etc and then a large decorated door, leading to the “promised land!!”.  Finally, it was our turn and it was well worth the wait!

An elf took us through and Santa was sitting in a gorgeous room with a roaring fire, it was real picture book stuff.  His costume was excellent and his manner quite delightful!  My children were slightly nervous as we went in, holding on to my hands, but as soon as they saw him they were mesmerised and instantly relaxed! 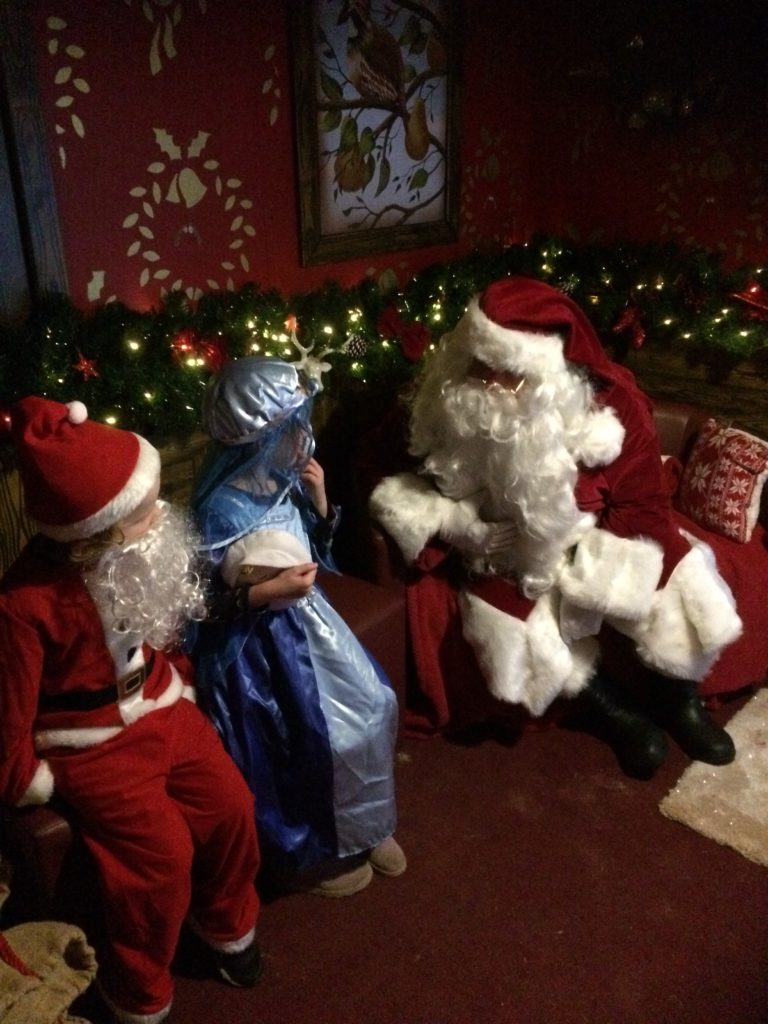 “Well haven’t you grown since I last saw you” he said, which I thought was a great opening line! “Did you like the presents I brought you last year?  I remember there were some lovely things”.  And so it went on!  Luckily they were on the nice list and of course promised to stay on it from now until Christmas Eve.  They were then given a present out of one of the sacks in the room – Oscar got a bug hunting explorers kit, and Martha a sand art set.  The presents looked good quality without being too over the top and being “something to do”, were I felt, universally appealing and in keeping with the outdoors nature of Knowsley.  They were both delighted with the experience and instantly declared that he was most definitely the REAL ONE!

We finished our evening out with a couple of goes on the dodgems, which are always good fun and walked back through the enchanted forest, stopping off for a last marshmallow en route! 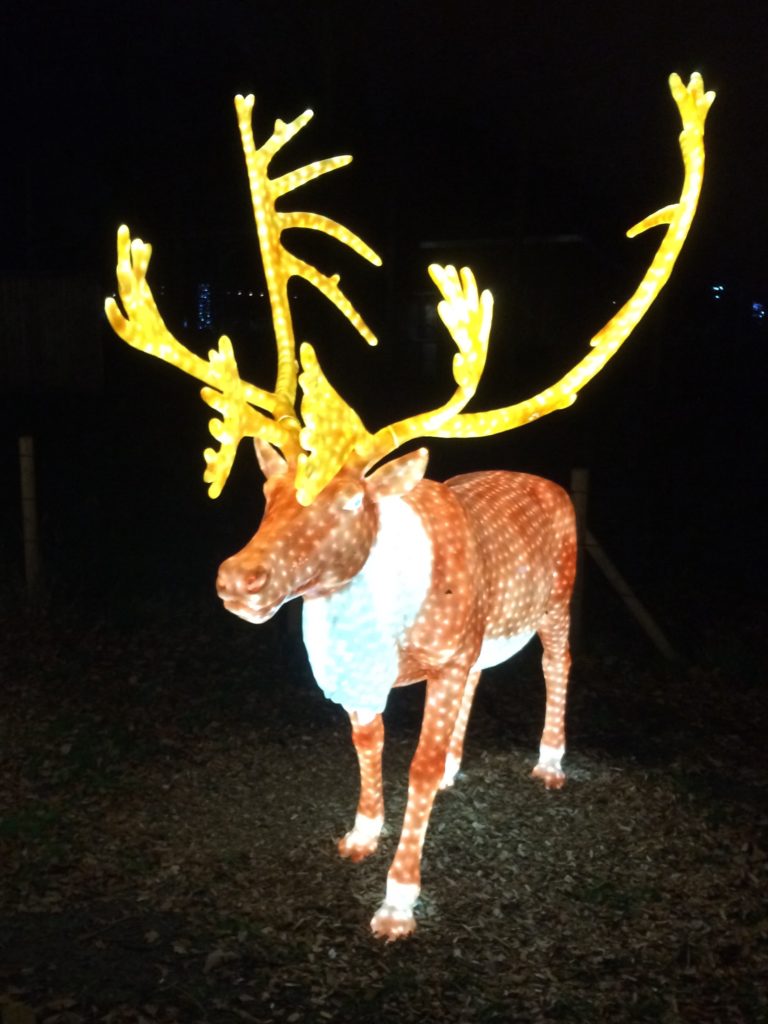 All in all, it was a lovely experience, the forest was a great pre-amble to the grotto, with Knowsley playing to their animal heritage with the theme of the illuminations; and their Santa was the quality gentleman he always should be!

Uncharacteristically, Oscar and Martha had decided to dress up for the occasion, with Oscar wearing a Santa Costume and Martha going as “Mary”, so it makes for some unusual photos!!

Enchanted is on Friday-Sunday evenings, from now until December 23rd, from 4-7pm.  It costs £14 per child and £5 per adult.  We were invited by Knowsley Safari Park, but the review is my own! 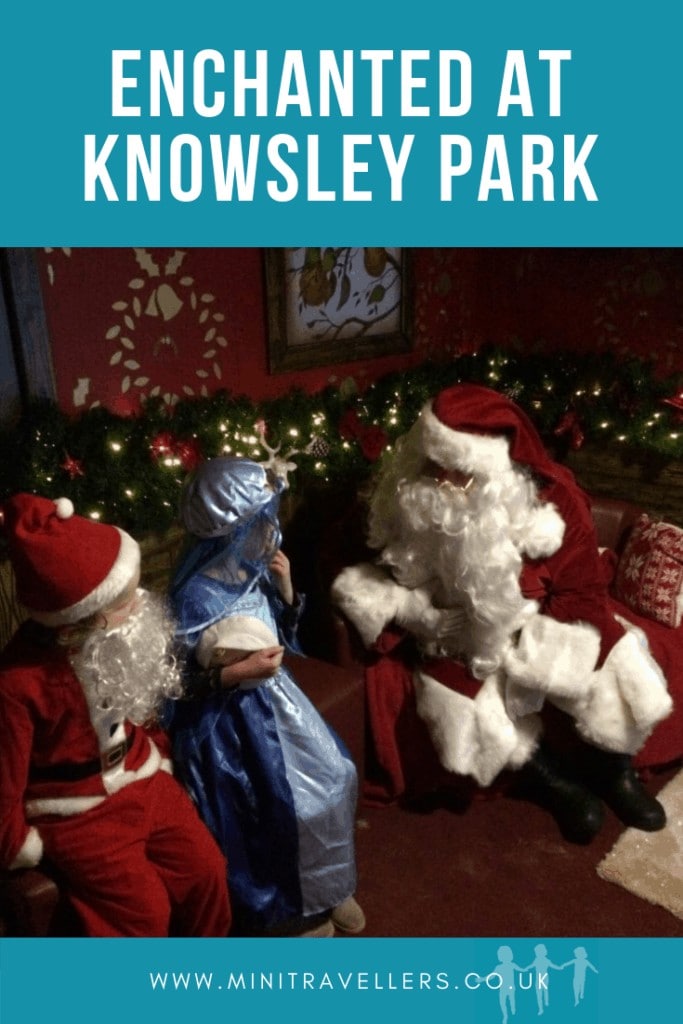