Big important news is on the horizon for Walt Disney World in the next few years starting with 2019.

Disney has confirmed some changes coming to Walt Disney World in the near future.  However, there are still plenty of rumours and unconfirmed speculation about what will happen next year as well.  Here are the top 2019 Disney World rumours.

Windows of the World

Next Fall will mark the end of Illuminations at Epcot.  Changes will take place overnight and the rumoured Windows of the World show will immediately replace it.  The new show is expected to completely alter the feel of World Showcase at night.  It will also be reminiscent of the Fantasmic! at Tokyo Disney Sea.  However, Disney World’s Fantasmic production will remain in Hollywood Studios.  The show is likely to feature character tie ins.  The showcase pavilions will be part of the show in some capacity as well.  The show will debut on October 1, 2019.

As Disney completes construction on Tron in Magic Kingdom, Tomorrowland itself is expected to get a cosmetic procedure.  Unlike more recent iterations in other parts of the world, the Tomorrowland at Magic Kingdom has a hokey retro feel.  After more than two decades with no updates leading up to this major expansion, it is rumoured that the area will be modified to keep up appearances in time for Magic Kingdom’s 50th Anniversary.  Let’s hope this one is true!

Speculation about changes to Toy Story Land has already begun.  This is due to survey questions and guest research that has been taking place since the area opened in July.  The loud and clear response has been frustration with heat amid the lack of air conditioning or shade in the area.  While it seems unlikely that Disney would go ahead with their Toy Story Land plans, fully understanding the Florida Climate, only to retrofit the area based on heat complaints, that is apparently exactly what they plan to do.

Spectators have long insisted that Indiana Jones will somehow find his way into Animal Kingdom.  The Adventurer Archeologist would fit in well just about anywhere you put him and in any capacity.  Some claim the rumour is misguided.  They point out that Dinosaur uses the same ride system as the Indiana Jones ride in Disneyland.  Other than that, they say there is no connection.  However, the rumour persists.  Some claim that Disney still searches for another Indiana Jones attraction. Many expect the stunt show to close amid current changes to Hollywood Studios.  Now that Rafiki’s Planet Watch is closed, it appears there is a new potential location for such an attraction.

The Skyliner Project is already very controversial.  Skeptics have taken to the internet in droves.  The chief complaint about the transportation method, which is still under construction, is that the gondolas will have no air conditioning.  Despite, the fact that this is common with this type of transit many are adamant that this will be a complete disaster.  The gondolas are rumoured to have been designed with a high tech ventilation system and have even been classified as luxurious.  We can’t wait to see how this turns out in 2019 when they go online.

Disney World Rumours to Watch For in the Coming Year 2019 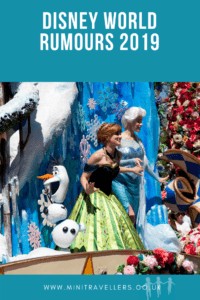