Wow it was an amazing, incredible, wonderful, beautiful show, in fact it was ‘BEAUTIFUL’ The Carole King Musical at The  Liverpool Empire Theatre.

Just waiting for the show to start in the impressive theatre was a great experience, as the whole theatre was buzzing with anticipation. I have to say that most of us were of a certain age just old/young enough to remember the 60s and early 70s!

When we had been invited to go and watch the show we didn’t really have any idea about Carole King’s life but other people had said  ‘you’ll love it’ so we thought why not? So we watched it and we more than loved it, it was fabulous, highly entertaining, energetic and eye opening, all with an added touch of humour. We never stopped smiling all through the show. It was a real trip down memory lane for us. Also we had no idea that Carole King was such a prolific singer/songwriter/composer, composing hundreds of hit songs for such  a variety of artists!

Bronte Barbe was excellent as Carole King, portraying her as a 16 year old girl and then as she embarked on her amazing career as a very young but talented music composer. She was paired with Kane Oliver Parry who was the lyricist Gerry Goffin to King’s music. They were married very young and had 2 children which put a strain on their marriage and working partnership, as Goffin really enjoyed the nightlife and other women!! Goffin came out of things rather better than he should have because he seemed very likeable but when King finally saw through him, her career took off big time! 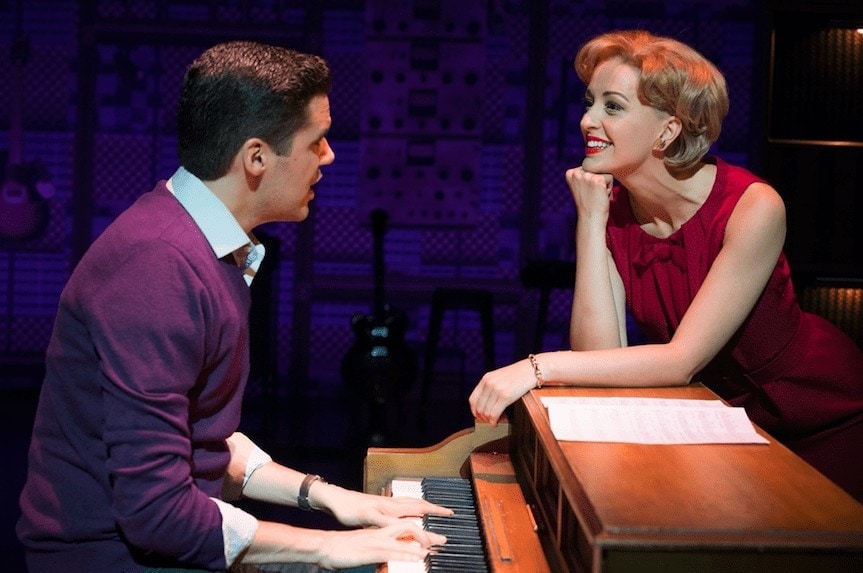 Amy Ellen Richardson as Cynthia Weil and Matthew Gonsalves as Barry Mann were the perfect couple to spar with King and Goffin for the top spots in the music business. Mann was talented but a hypochondriac and Weil was a beautiful and sophisticated young woman. They also all ended up as best friends as well as rivals.

The music and singing was excellent, the Ensemble were brilliant portraying many different solo singers and groups. They switched from The Drifters to The Righteous Brothers, the Shirelles to Little Eva and Janelle, Neil Sedaka to a Swing band, all very  very talented people. But Grant McConvey and Ben Morris as The Righteous Brothers singing ‘You’ve Lost that Loving Feeling’ were outstanding. All through the show the audience waited in anticipation for the next song , then gasps could be heard throughout the theatre as we realised what it was, then it was toe tapping and shoulder shaking all round!

All in all it was a thoroughly feel good show of an ordinary girl with extraordinary talent, well worth going to see and The Liverpool Empire was the perfect place to see it. It’s a lovely theatre and the recently added Piano bar is a very relaxing place to have a drink and listen to the pianist playing before the show and in the interval.

NB: Mini Travellers received complimentary tickets to see BEAUTIFUL’ The Carole King Musical at The  Liverpool Empire Theatre but all views are the writers own.