The First Hippo on the Moon is a picture book-turned play written by the formidable king quipster of comedy, David Walliams. The book was adapted for the stage by award-winning theatre company Les Petits. I caught the show on its final Friday at the Waterside Arts Centre in Sale, Manchester with about five dozen other work-weary parents and their offspring in early evening.

My son, his friend and I settled into our seats and, sticking to the BYOS—bring your own snacks—ethos, passed around bags of popcorn, sweeties and juice boxes. The tech crew killed the lights, causing more than a few worried whimpers, and fired up the soundtrack, cueing the start of the Pachyderm News Network where we were introduced to Hercules Waldorf Franklin III and his self-funded mission to be the first hippo on the moon.

Hercules, flush with cash and enough common sense to wear trousers, isn’t heard from until the last few acts. Instead, we follow fellow hippo Shelia, a brash, inconsiderate, narcissistic heroine (?) on her journey to build her own rocket with a motley crew of jungle pals and pip Hercules to the post.

Sheila is a bit like marmite. At times, she’s an endearing character, picked on and bullied by Hercules, with an unshakeable desire to be the first hippo on the moon. In seemingly the same breath, she transforms from loveable star into the type of “person” none of us want our children to become. She takes her friends for granted, she uses them, forcing them to help her build her rocket and then dumps on them when it doesn’t go quite to plan. Spoiler alert—she also ends up committing grand theft space rocket.

Sheila’s longsuffering friends are a chatty giraffe’s head Keith, scrappy porcupine duo Scratch and Sniff and the brains of the operation ostrich Derek. Helping Shelia and her mates out along the way is a narcoleptic gorilla, SilverBob. 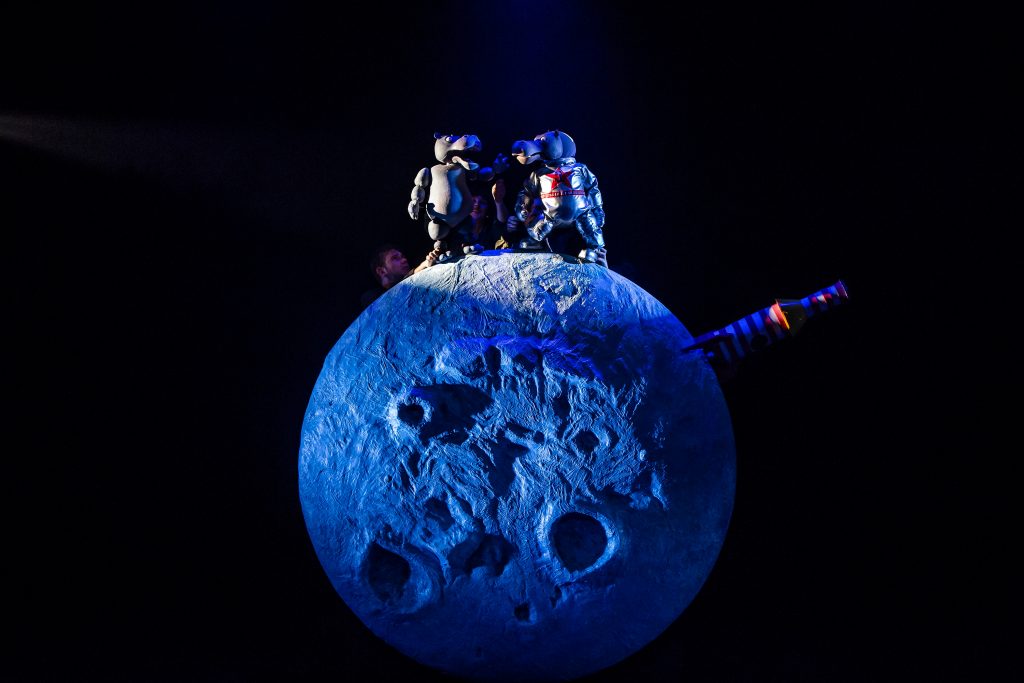 Photo Credit: Richard Davenport for The Other Richard

The play continues much like the book does with the addition of a few easily forgettable musical numbers. At times the dialogue is mildly offensive and if you’re the type of parent who doesn’t want your four year old walking around calling people “bum faced” “stupid” or “idiot,” this isn’t the play for you. There’s also an overwhelming amount of toilet humour, with poo being the fuel needed to power Sheila’s rocket.

Overall, the play aims to teach an important lesson in friendship, contentment and positivity, albeit in a bumbling, slightly offensive, extremely tongue-in-cheek fashion. Exactly what you’d expect of Walliams.

As far as the venue is concerned, you can’t get much more accommodating than the Waterside Arts Centre. It’s near Sale town centre, just across the street from the tram station and a stone’s throw away from a car park (£3 for 2 hours, just enough time to see the 60 minute play, loo breaks and stop off to watch the canal boats). There’s a string of trendy bistros and restaurants that would make a perfect pre-show dinner or dessert stop for after the curtain call.

The roster of child-friendly performances is quite impressive with upcoming must-see events like the stage adaptation of David Walliams’s Billionaire Boy on 18 June, suitable for ages seven and up. For the younger ones, The Scarecrows’ Wedding will make the perfect intro to a night at the theatre, playing from 26 to 28 May. When you visit, don’t forget to nab a leaflet for all the other family-friendly shows and activities coming up!

About the Author
Anyonita is mom to two gorgeous cookies and writes Anyonita Nibbles, a gluten free food blog full of child-friendly recipes you won’t believe are gluten free! Connect with her on Pinterest and Instagram @anyonita!

NB: Anyonita received complimentary tickets to see Walliams’s Wacky Hippos in order to review but all views and opinions are her own.