On Saturday morning I took 4 kids (age range 3 to 9, two of my own and two borrowed) to see “Underneath a Magical Moon” at the Waterside Arts Centre in Sale presented by Tutti Frutti productions and York Theatre Royal. I was a bit nervous about leaving my ‘hood (Heaton Moor) and venturing to Sale but the Waterside Arts Centre was very easy to find and I only took one wrong turn to the usual chorus of “Are we lost again Mum?” There was a large multi storey car park close to the venue so it was all very straightforward.

Shortly after we found our seats the show started with the cast roaming about the audience chatting to the kids which my 3 year old especially loved. The production is a re-imagining of J.M Barrie’s Peter Pan told from the perspective of Wendy. Three children are camping out in their suburban back garden and they can’t get to sleep so Wendy tells the two boys the story of Peter Pan while they act, sing and dance out the story. The story switches seemlessly between the present day in the back garden and the adventures in Neverland. 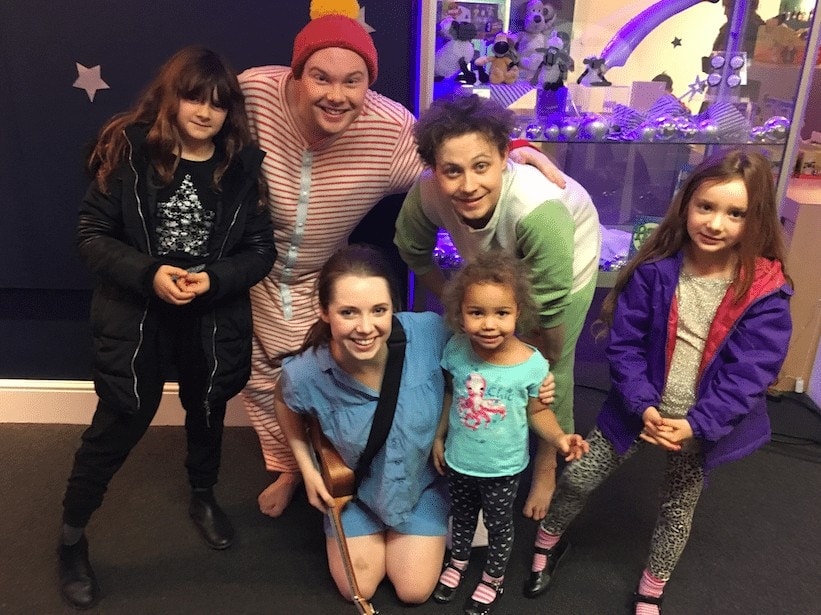 The musical performances were particularly impressive. The cast played a multitude of different musical instruments during the performance as well as giving excellent vocal performances, my favourite being the hip hop pirates. The set was very cleverly designed with almost everything on the stage having several uses, the cast even managed to look like they were flying without ever leaving the ground.

The production leads the audience on a magical adventure using cleverly designed props and a healthy dose of imagination. The older kids were definitely enthralled and there was something there for everyone. My 3 year old did get a bit fidgety towards the end of show (perhaps something to do with the sweets I was feeding her?!) so maybe a show for slightly older ones (maybe 5+). Having said that the show was a resounding success with all four children and they loved having their picture taken with the cast at the end. My son has now been inspired to camp out in the back garden but we might leave that until the weather is a bit warmer.

I would definitely recommend this show if you are looking for something to keep the kids entertained during the Christmas holidays. It runs until the 31st of December in Sale!

Why not watch a little video of the show

NB: Tash and her family received tickets to see the show but all views and opinions are her own.

I went to see this in Theatre Clwyd a couple of weeks ago and it was amazing. Incredibly magical. And it's inspired me to turn my garden in to a faux Neverland for the boys come summer. Fantastic performance!