So what is Santa’s Christmas Party at the Cunard Building like?

Earlier this week I attended the launch of Santa’s Christmas Party at the Cunard building.

Opening today and on until December 24th, Santa’s Christmas Party is intended to be something a little bit different and a bit more than your average Christmas grotto. To be fair it is – but it needs to be as the prices are quite a bit more too:

You pay for according to the website a “fun packed THREE HOURS, of songs, film, dance, music, magic and of course the chance to MEET SANTA himself and receive a PARTY BAG PRESENT. 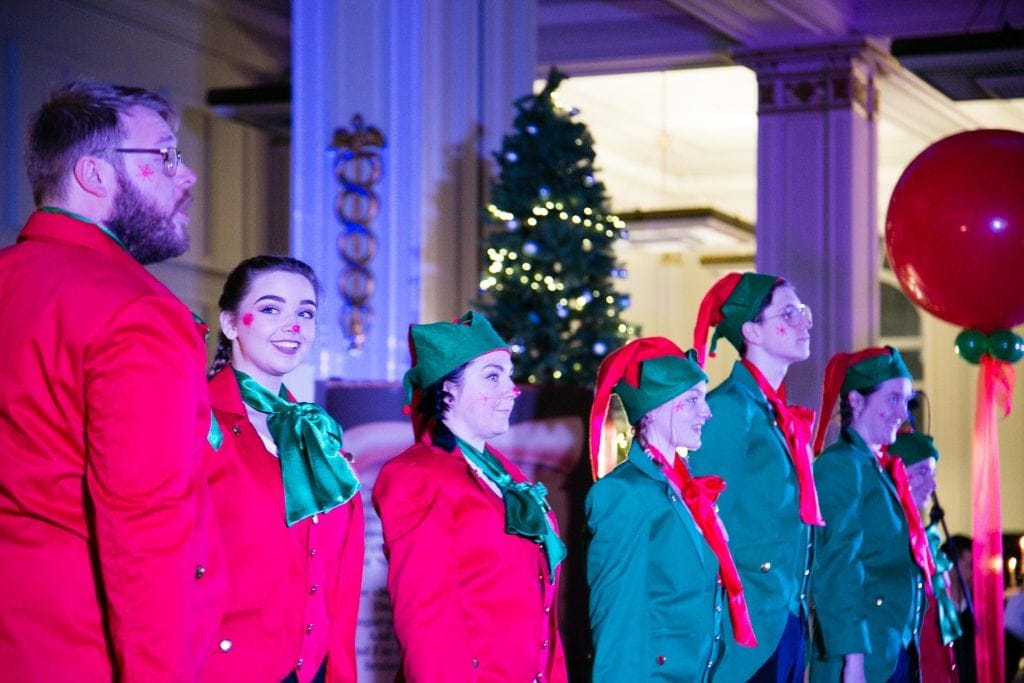 On the night we visited we got to experience most of the activities that will be on offer. My three kids (aged 7, 6 and 6) enjoyed it but after an hour they had watched the Santa show, (I had watched Mark from Westlife sing his new Christmas songs!) danced with the elves, patted the reindeers, eaten some sweets and watched some of a film and they just wanted to meet Santa – in fact they wanted to meet him so much that for around 30 minutes until they did get to meet him they sat outside the entrance to the Santa area chatting/pestering the Elf!  Information over the tannoy about when the groups are likely to get into see Santa (and regular updates) will help parents manage their children’s expectations on this I would suggest. 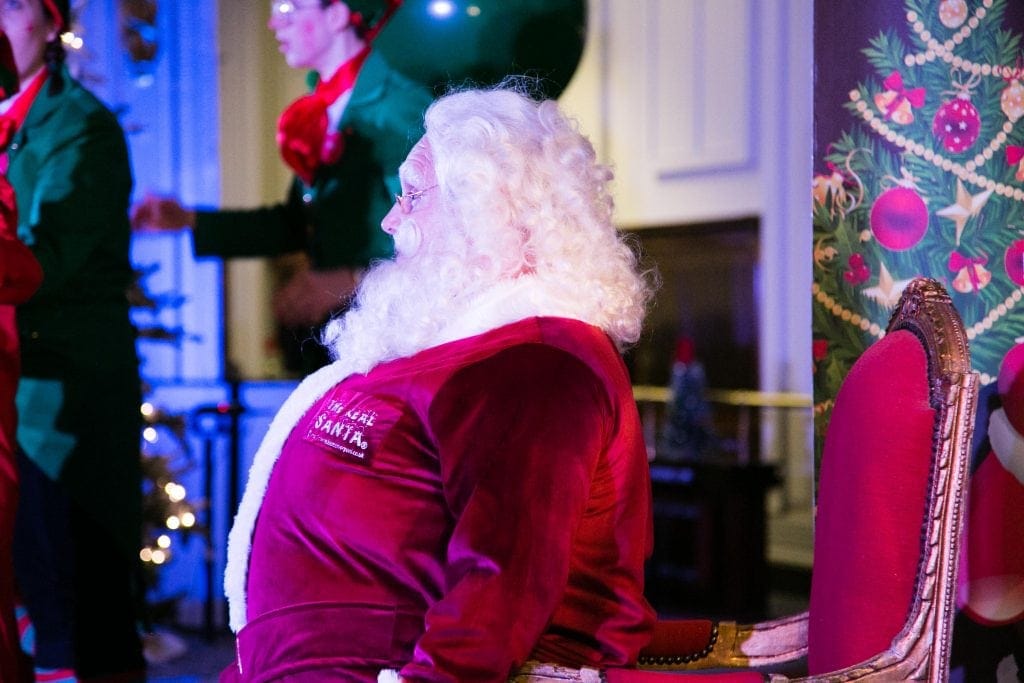 Visiting Santa is where, for me,  the format struggles a little. The idea is that you won’t have to queue to see Santa as you go in to meet Santa during the 3 hours in 4 different reindeer groups.  We were in the second group Comet. However this I think doesn’t really take into account the fact that for kids, seeing Santa, will be a major part of the visit, if not the only part.  The elves did their best to encourage the kids within the groups to take advantage of the colouring and to play, rather than queue, to see Santa but no-one did. Maybe it’s also because we are British and we have a propensity to queue, maybe it was because it was late, but I think it’s just because the kids want to see Santa.  So if you’re going you need to make sure they know (and you know) that if you book a 2pm slot you may not see Santa until 4.

Seeing Santa is however lovely. Santa is fabulous as is his study.  It feels special and thought has been put into the lighting so you can actually get some lovely shots of your kids with Santa – all too often I find you get dark photos that you can’t really make out -but not here. The setting is brilliant. 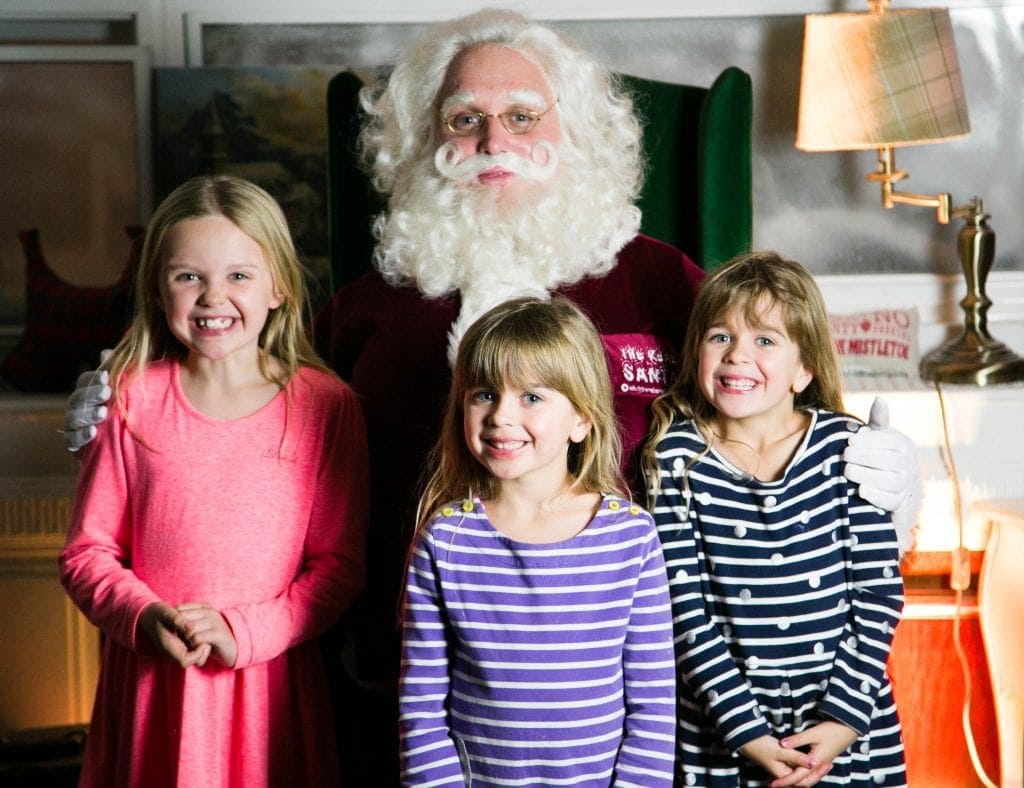 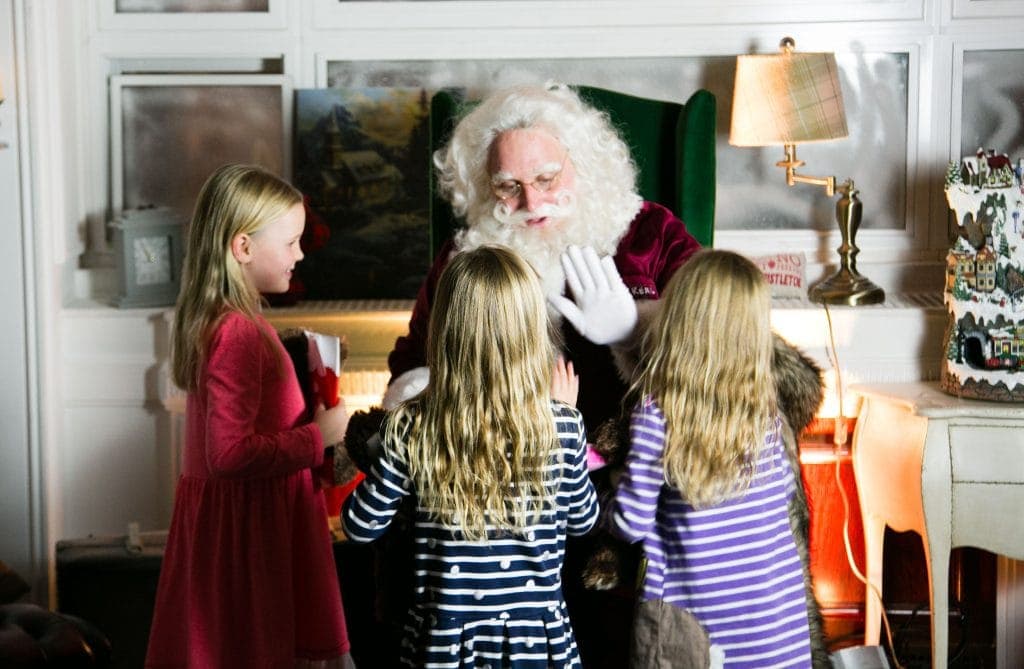 Whist you are waiting to see Santa you can also create and post your own invitation to WIN A VISIT from the great man to YOUR HOUSE on Christmas Eve, before he starts his journey around the world, delivering to all the good boys and girls. A lovely additional touch.

The gift bag and the teddy the girls received was also well thought through and a nice gift! Recollections of the money off voucher they were given as there only gift, in a grotto in Blackpool a few years ago still haunts me.

Initial thoughts are that it’s expensive (so needs to be a treat) and your kids (and you) will probably get the most out of it if you visit along with friends and intend to spend most of the afternoon sipping wine/drinking coffee and catching up during the festive season whilst the kids enjoy some freedom to wander about/dance with the elves and watch some Christmas films.  Make it into an afternoon out with friends and you’ll really capture the essence of what the party is supposed to be about. Think of it as somewhere to pop in and see Santa and you’ll be frustrated and miss the idea. 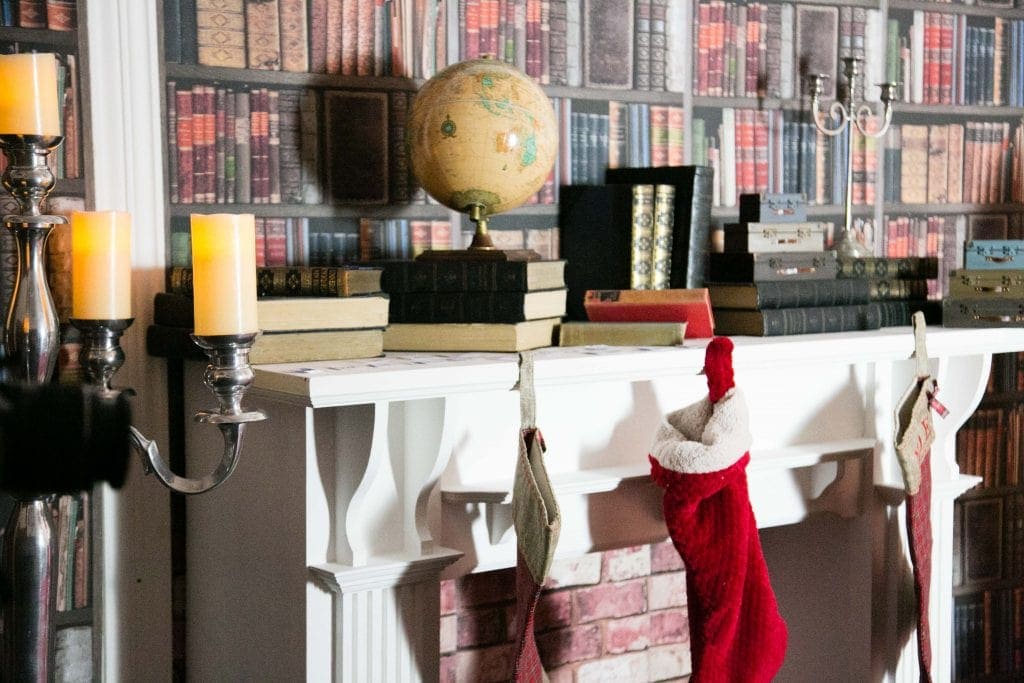 If we had gone to this event alone I don’t think there would have been quite enough to do for the older ones (mine are 6 and 7 and I class them as older ones for this) to keep them occupied for the full 3 hours.

We didn’t however get a chance to take a trip on Santa’s very own LAND TRAIN – The Cunard Express, so I imagine that would take up some more of the 3 hours but how this fits in with the visit to Santa and your slot I’m not sure.

You can see what the MAIN ATTRACTIONS are here:

MEET SANTA – Spend a little time in his study, take a Santa Snap for your scrapbook and receive a PARTY BAG PRESENT

DISC-HO-HO! – Bust some moves to some festive favourites in the Jingle Bell Ballroom 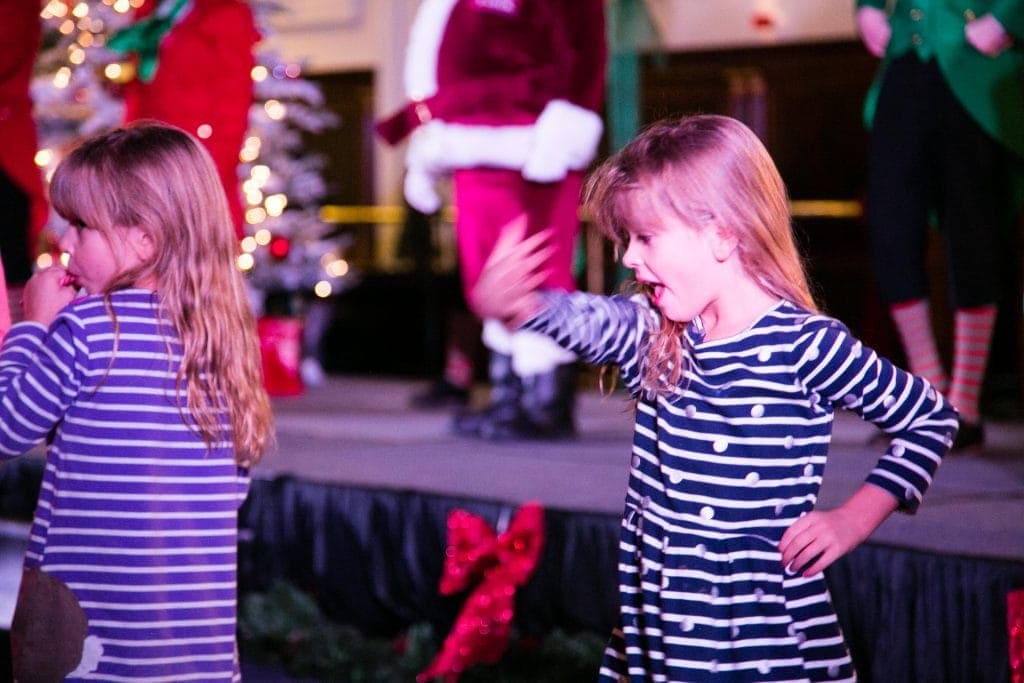 VISIT FROM SANTA – Create a personalised invitation, with a chance to WIN a visit from Santa to YOUR HOME at Christmas.

REAL REINDEER – Two of Santa’s favourite reindeer will be in the house to pet. 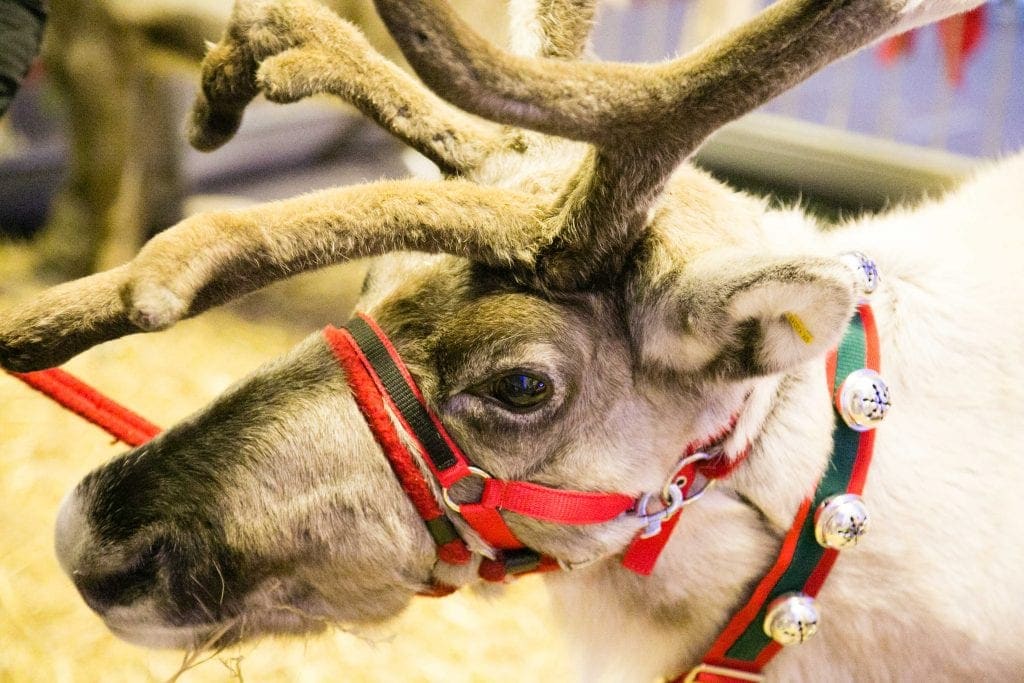 SANTA SINGS! and with help from his festive friends, he’ll really get the party started!! 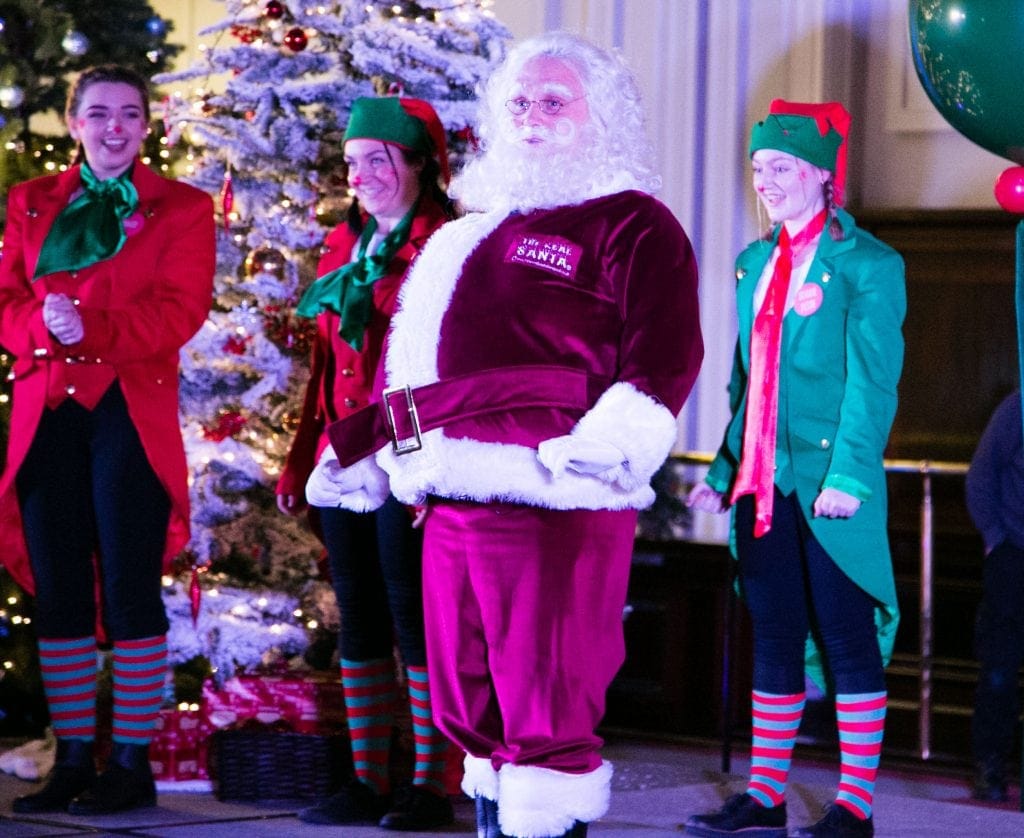 AND MUCH MORE!!!PLEASE BE AWARE THERE ARE STAIRS LEADING TO THE ENTRANCE OF CUNARD BUILDING.

Oh my word that all sounds so exciting but a hefty price for a family!! It all looks amazing though and there’s nothing like seeing the big man to set you off with the Christmas spirit.