I took two of my children (11 and 7) to the Lowry theatre in Salford during half term to see an adaptation of Michael Morpurgo’s Why The Whales Came. Produced by Wizard Presents, it stars Danyah Miller in a mesmerising one-woman theatrical storytelling performance.

After being lost at sea, and stranded on his tiny island, the children begin to get to know the real Birdman, to challenge the villagers’ fears and superstitions, and learn why the whales came to the island. It’s a thrilling yet moving story, and provoked a lot of discussion between the children and me afterwards about how we can sometimes make judgements or believe what we’re told about others, without giving a person a real chance, and about how we can sometimes blame others unfairly when things go wrong. 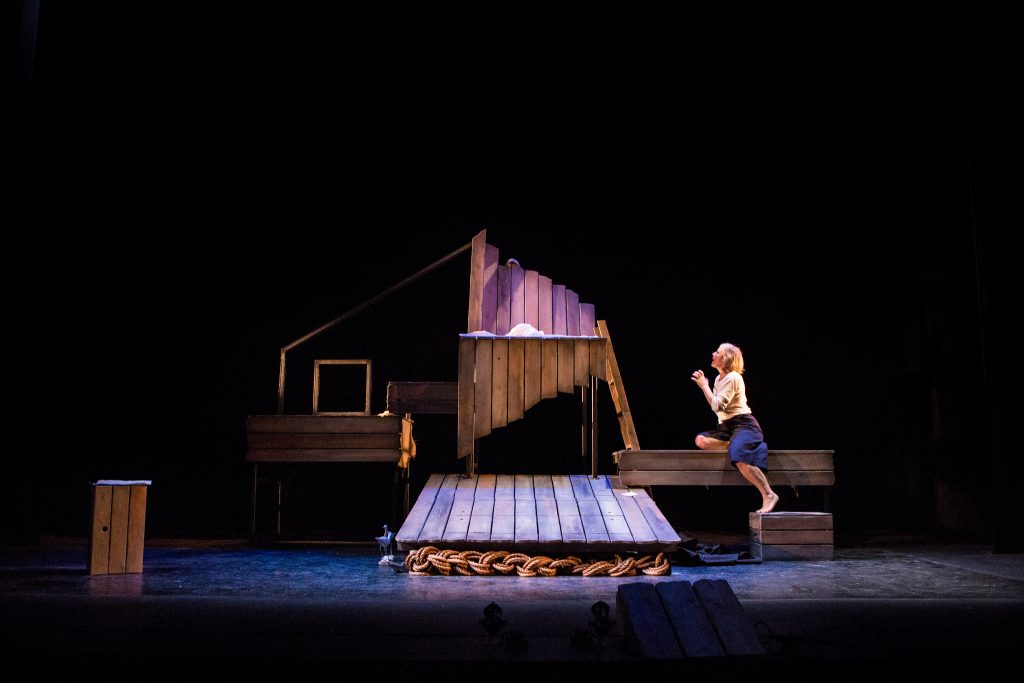 The performance lasts an hour, and all the action takes place on a simple wooden structure which transforms from a jetty to Gracie’s home to a beach to a boat. Danyah Miller mainly narrates the story in the third person, but also takes on the characters of Grace and the Birdman from time to time and it is testament to her skill as a storyteller and actor that you really believe it is the characters speaking. To help her tell the story, Danyah opens up hidden doors and cupboards within the wooden set to reveal wooden toy boats, hidden messages from the Birdman, carved wooden birds and even a pool full of water, which she cleverly uses to illustrate the storm the children are caught in, projecting the image of a tiny wooden boat and the small pool using a mobile phone. The lighting, set and projection are so clever, and Danyah herself is a wonderful storyteller. We were all in awe of the fact that she was able to remember all the words, and inject them with such expression, holding our attention completely for the whole performance.

When the performance ended, Danyah Miller invited everyone to meet her outside the theatre and to take a shell from her basket. She said she hoped that, instead of hearing the sea in these shells, we would hear a story of our own, and perhaps tell it to someone. I thought that was a really lovely idea, and we each came home with a tiny, beautiful shell as a memento.

A really magical show, which children (and adults) of 7 and above will love. You can get tickets here.

You can also watch a trailer here: