On day 3 of our Rome adventure (whilst staying at Eurocamp just outside Rome) we spent the day with Rome4Kids.

Our first activity was at the Pizza Masterclass for Pizza Lovers. We made our way to the Coloseo (Colosseum) via the bus and metro, and then walked around 30 minutes across town to a cute little restaurant called Al Braciere (located near to the Piazza Navona). The kids were super excited from the moment we stepped over the threshold of what you would call a ‘proper’ Italian restaurant and saw one of the chefs making pasta in preparation for the lunchtime trade. We were greeted warmly by Maurizio who gave us our aprons and took us through the process of making pizzas from scratch. We had expected to be part of a bigger group and were very pleasantly surprised to find that it was just us there. This meant our kids had the full attention of the staff and they all revelled in that.

Maurizio was kind and patient with our mini travellers, letting them weigh the ingredients and knead the dough in their own time (with a little help from the food processor to mix the ingredients). The kids stood on chairs at the proper pizza preparation area and tossed about the pizza dough until they had a created the prefect base to add their own choice of toppings. They delighted in creating smiley faces with ingredients they hadn’t tried before, such as olives and capers, and in helping the chef get the pizzas onto the paddle before placing them in a proper pizza oven to cook.

2 minutes later they were ready so we sat down at a table in the restaurant and ordered some drinks and totally stuffed ourselves with delicious pizza!  What a lovely way to spend a lunchtime, to learn something new together as a family and enjoy a relaxing and delicious meal. I think it summed it up when our eldest said, “Mummy, it’s really posh what we are doing!” I said, “Do you mean you feel special because we’re doing this pizza making class?” “Yes I do, it’s really good.” A highly recommended experience for families with young kids that lasts about 1-1.5 hours.

To remind yourself of the Pizza Making in the Future, why not PIN it 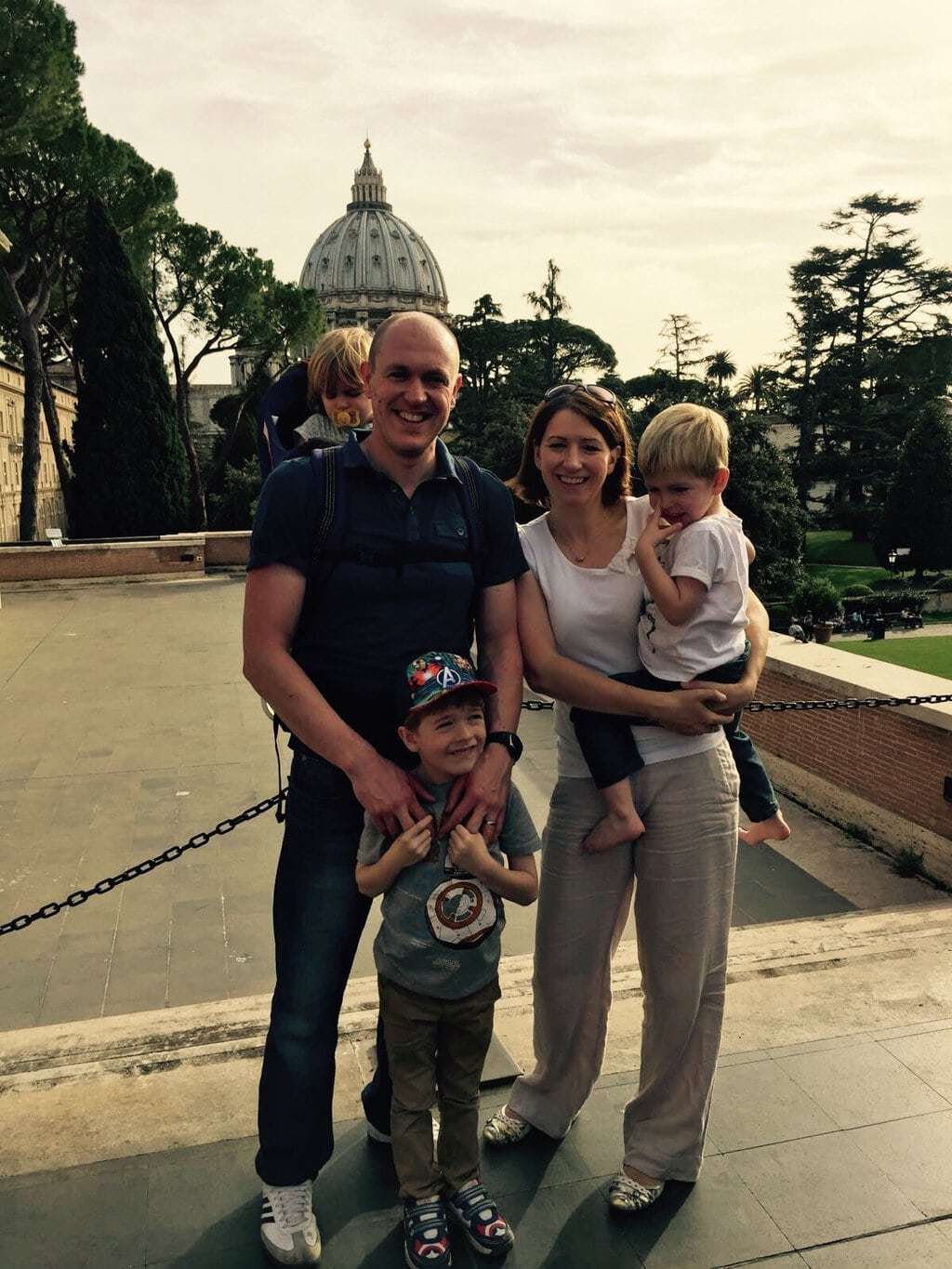 Our second activity of the day was the greatly anticipated (by my husband and I) tour of the Vatican. This is somewhere we have both wanted to visit since we watched Angels and Demons together in the early days before kids and the desire to see Rome and the Vatican for ourselves grew again after watching The Borgias a couple of years ago. Was this going to be a good idea though – to brave the crowds and risk ruining our dream visit with tired, wailing children and consequently finding ourselves stressed out and disappointed….?

It is truly brilliant to be able to say, yes! Yes, it was a good idea! No, the kids didn’t cry and throw tantrums. Yes, we saw the Sistine Chapel, St Peter’s Basilica and the Vatican Museum. It was everything we had hoped for and even more as we were able to share it with the children and it is thanks to our private tour guide Katja that it was able to happen.

So how does it work? You book your private tour with Rome4Kids and then you either book your Vatican tickets online or Rome4Kids can do that for you (especially for the early bird Vatican Trip) and then print them out before you go. Your tour guide meets you outside the doors to the museum and you skip the queues and go on the tour for around 3 hours. The tour is called ‘The Divine Race Treasure Hunt of the Vatican’ and the children are given a booklet with pictures of things to look out for and check off on the way round. The tour guide aims their talk at the children, explaining the rise of the Roman Empire, the growth of Christianity and creation of the Vatican City. Our tour guide also used an iPad to present some of the information in a much more child friendly way using pictures and animations. Occasionally she also said, “This is just for mum and dad,” so the kids knew they could switch off for a minute!

One of the highlights of the tour for our children was seeing the different carriages that have been used to transport the Pope over the past few centuries. They are beautifully preserved and behind some of the more recent cars they have video clips playing of the Pope being transported. The children also enjoyed looking at the animals in the painting of Adam and Eve in the Garden of Eden, the marble pagan sculptures that had once been smashed up and buried only to be discovered hundreds of years later and put back together, and the breathtaking Gallery of Maps. Of course we also saw the Sistine Chapel and St. Peter’s Basilica which are simply stunning and could not even escape the attention of our littlest one who at just 2, gazed up above her at the ceilings and paintings in wonder.

Despite the huge crowds, navigating with a pram was do-able, mainly because the flow of traffic was generally one way. There are lifts in most areas however it easiest to pick up the pram and climb the stairs – be prepared that you will have to do this a lot though! And this is really the key thing to consider if you want to take your children – can you contain them to keep them safe in big crowds, and can you carry them all when they are tired? 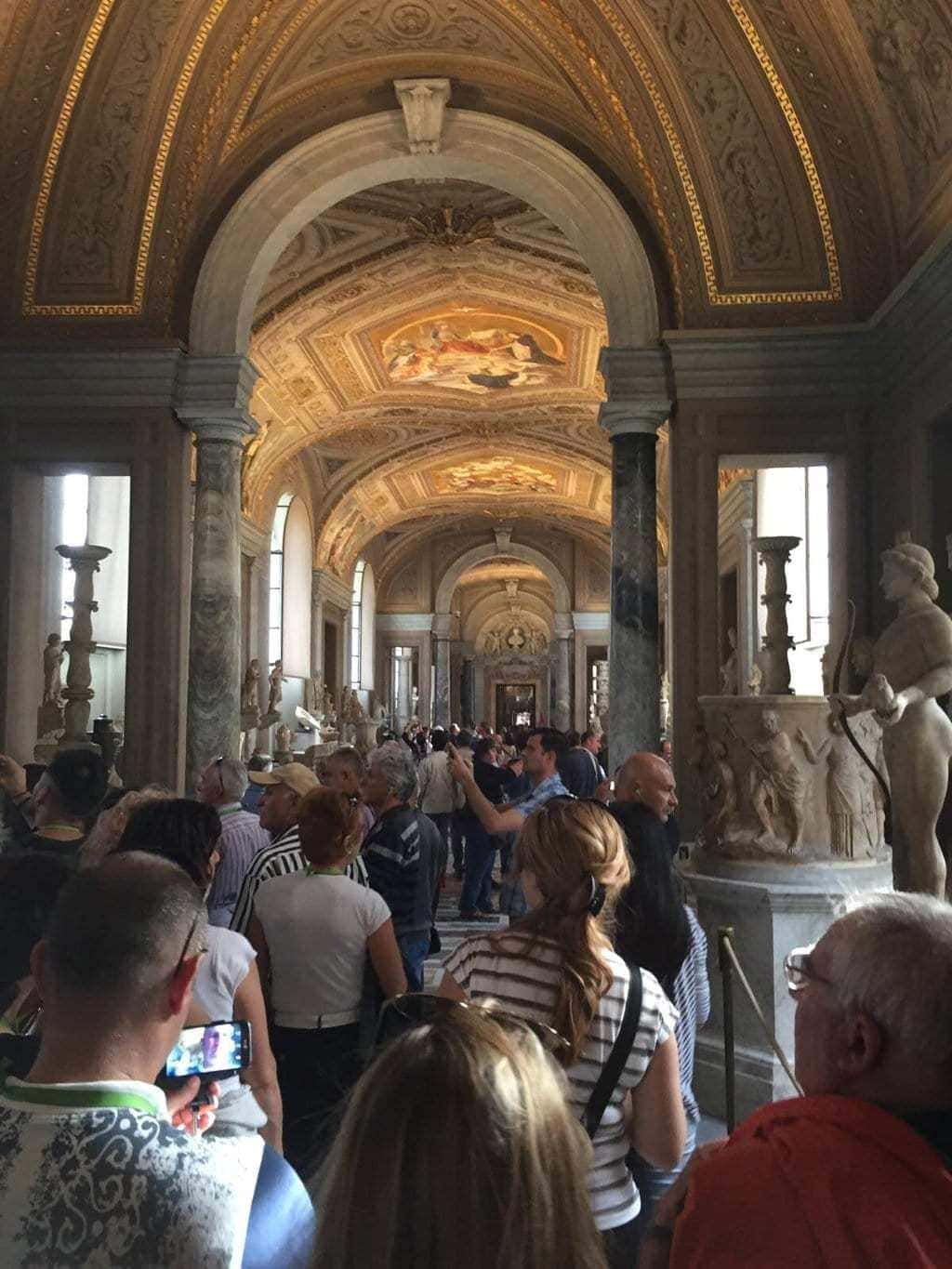 We took the pram for our 3 year old as we knew he wouldn’t cope with the amount of walking – the museum has about 4.5 miles of halls – and a baby carrier for our 2 year old. We were unsure as to whether this would be OK as only small bags are allowed, but it turned out it was. I’m not sure whether the fact it is just a carrier and has no baggage compartment attached made this more acceptable or not. Having Katja as an extra pair of hands also worked well with our eldest child who is nearly 6 as he often held her hand through busier areas.

There appears to be a number of tours that operate within the Vatican but what makes Rome4Kids better than any of those, in our opinion, was that by engaging the children we adults could relax and enjoy ourselves. We learned so much too! You can also go at your own pace or even change the route if you wish to stop for a rest, water, the toilet or snacks when you need to which is essential with little ones.

We lost count of the number of times we were cut up by tourists wearing headsets desperately trying to keep up with their group and tour guide so they didn’t miss any of the information. We on the other hand had the luxury of moving around at a more relaxed pace and being able to have things repeated and to ask as many questions as we wanted. Katja really is an expert in her field!

In summary, our tour with Rome4Kids was unmissable, a once in a lifetime experience for our mini travellers and ourselves that we couldn’t have had enjoyed without Rome4Kids.

Not only available in Rome, Europe4KidsTours are all now over Italy and also in 13 other European countries. Highly recommended.

Why not PIN this Tour for the future!

NB: Emma and her family were invited on the tour by Rome4Kids but all views and opinions are their own.

oh wow, just wow!! You obviously had a fabulous time and saw and did so much. With the ages of your children, you did really really well. Fab photos too. XX