When I said we were off to see Mr Popper’s Penguins at the theatre, the first thing that people said was ‘have you seen the film?’ Well I must confess, it was worse than that, I didn’t even realise there was a film, let alone a book that they were both based on! So with a completely open mind, Hugh, Zach, Helen and I headed off to London. I had high hopes, with multiple friends expressing their jealousy of our tickets; I was more excited than Hugh – the boys would have been happy with a day on the train!

The Criterion Theatre is immediately outside the Piccadilly Circus tube station (well if you choose the right exit!) which meant it was an easy trip down from Euston. With time to spare we grabbed our tickets and waited for the doors to open. More and more young theatre goers arrived and as the queue was forming we were given the okay to go in. Like a lot of West End theatres, we found ourselves winding down a number of flights of stairs, not ideal if you are bringing a buggy.

We took our seats but unfortunately there were no boosters, so Hugh climbed up onto the rucksack as a make shift attempt to ensure he could see. Zach, being a little taller, stood and peered through the gaps to the stage. As the lights went out, I really wasn’t sure what Hugh was going to make of a play he had never heard of or read, surely penguins would win him over! 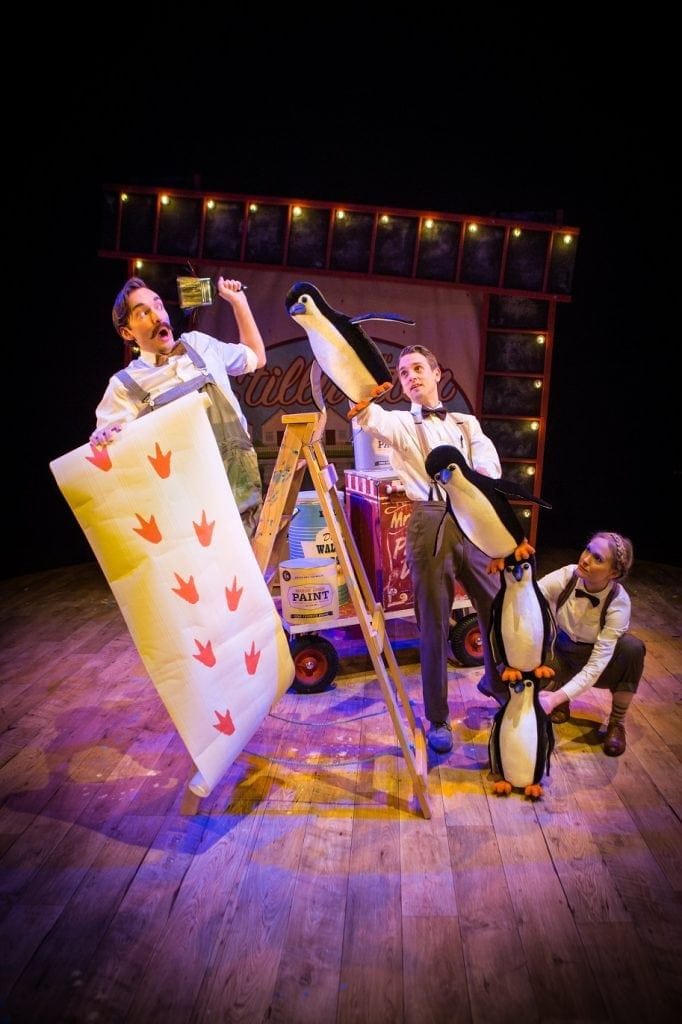 Well the boys were captivated from the off. The clever puppetry of the penguins combined with joyful songs ensured that the young audience were brought into the storyline. The cheekiness of the penguins raised a few giggles and you could see that they had almost become real by the reactions of those around you. It wasn’t until the end that I realised that unlike nearly all of the other children’s theatre we have seen, there was no audience participation until the encore. The fact that this had gone unnoticed was testimony to how captivating the show really was.

We joined in with a penguin dance to end the show, and mastered our waddle so we could flap our way out to the foyer. With spending money from Zach’s Grandma burning a hole in their pockets the boys were eager to buy a penguin each. At £7 they were really reasonable; it was nice to see that the merchandise was subtly displayed, therefore easily avoidable this close to Christmas. Before heading home, Hugh jumped at the chance to meet Mr and Mrs Popper and Greta the Penguin in the foyer. It was worth the wait to see Hugh’s smile, a really nice touch to end the show.

With Percy and Phoebe the penguins in their hands, the boys waddled their way home whilst mastering penguin language… much to our fellow travellers delight! The fact that Percy has been the chosen bedtime toy ever since, shows that Hugh would give Mr Popper’s Penguins a raving review.

Mr Popper’s Penguins is on in the West End until 31st December.

NB: Emily received tickets to see the show in order to review but all views and opinions are her own.