BC/Before Children, Craig did a LOT of travelling and I did a little, and we had lots of adventures together. Our favourite places were all in Asia and we had a fabulous trip to Thailand about 14 years ago. We wanted to show the kids somewhere a bit different and hoped they would get the enjoyment and excitement out of travelling that we once had! So was it worth a trip to Koh Samui with Kids?

We both remembered Koh Samui as an amazing romantic destination that was fairly unspoilt and we both had happy memories of our trip there.  We have great friends in Dubai and it had been many years since we visited them and so we felt it only fair to incorporate their kind offer of free accommodation into our trip. My Husband booked the trip through Travelbag.co.uk. From memory it was an impulse booking based on a marketing email. However the service was very good, given that our trip was fairly bespoke and arranged largely over the phone with an agent called Florence Simpson. She was very good at returning calls, and keeping all the documentation updated. Unlike a lot of tour operators, we would actually go through Travelbag again.

On our previous holiday to Lanzarote  we waited several hours for luggage at the airport with 3 tired children and very grumpy grown ups, in the middle of the night because of fog. So we decided that hand luggage only was the way to go. The kids were only too happy with this idea after Santa brought them a suitcase each for their adventure. We had three small suitcases and a rucksack for Craig to lug about all things that nobody else wanted to carry; namely phones, the i-Pad, 4 kindles and music players. Under 30 kg in all.

Craig insisted that the kids all go to swimming lessons on the morning of our departure to Dubai. (It is PAID  FOR). On their return Toby started complaining about feeling ill, blaming Daddy for making him go swimming when he wanted to go to the airport to watch planes. He looked a bit flushed but as only medical parents can, we totally ignored him and set off to the airport. He slept the whole way and for most of the next 24 hours. Found amazing new product of paracetamol tablets that you can chew for kids which saved lugging a bottle calpol onto plane and so did not have no worry about everyone getting pink and sticky.  We could not fault the flight on Emirates and the kids that were not diseased had great fun. Despite this he was pretty miserable and fairly sleepy on the flight. On arrival our hosts – also Doctors, pointed out it he looked like he had slapped cheek – this of course made sense. High temperature, grumpy, rash. Easier to spot when its not your own kid. So all in all we had 96 hours of back to back Twin Parvovirus to start off our adventure.

Dubai was exactly as we remembered. Fabulous hosts and great friends and a desert with shopping malls and  lovely places to eat. We went to lots of amazing places. Visited the Flamingos just outside Dubai City, went to a zoo,  Sharjah Wildlife Centre, and the Dubai Aquarium.  For Lara one of the highlights was going to a Starbucks as the poor deprived child had never been to one before. Only two nights in Dubai but we packed a lot in and of course caught up with our lovely friends and their kids, Shereen and Sean. 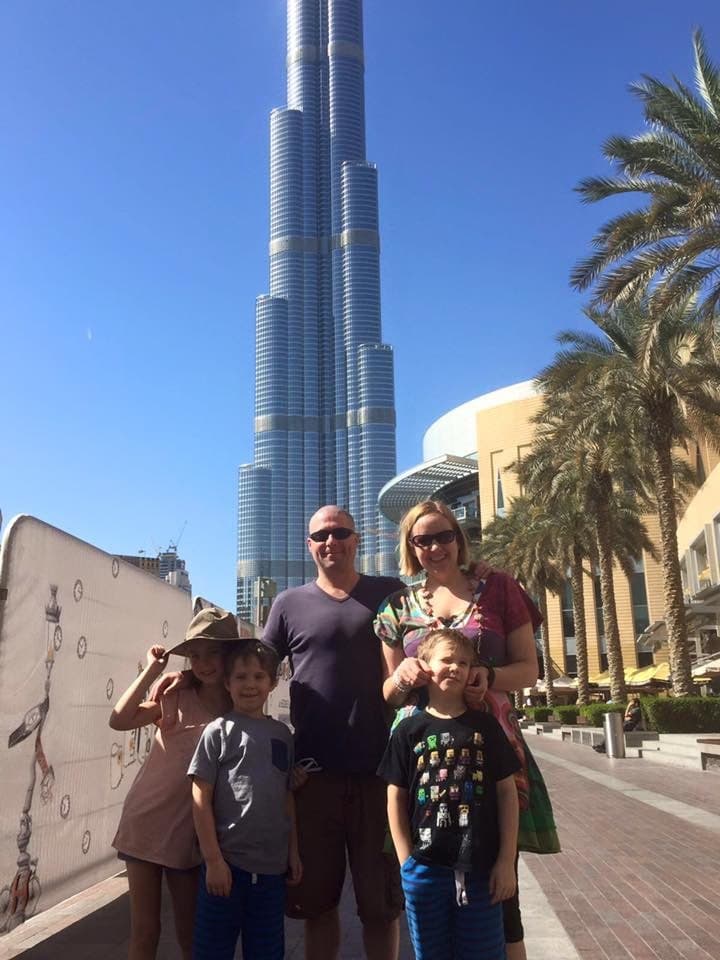 We then flew to Bangkok with a transition of virus from Twin 1 to Twin 2 with pretty much identical symptoms. We had a great plan of taking them out for the evening on arrival but as Lara had succeeded in vomiting both in departures and on the plane – in a headset bag ( Craig couldn’t locate the sick bag – headphone bags are not very sick tight – for reference) They were a bit smelly and the boys still looked grim so off to bed we went. Probably would have been better to get a hotel next to the airport in future for such a short stopover. We didn’t manage to make it out into Bangkok but if you do, here are some things to do in Bangkok with kids. 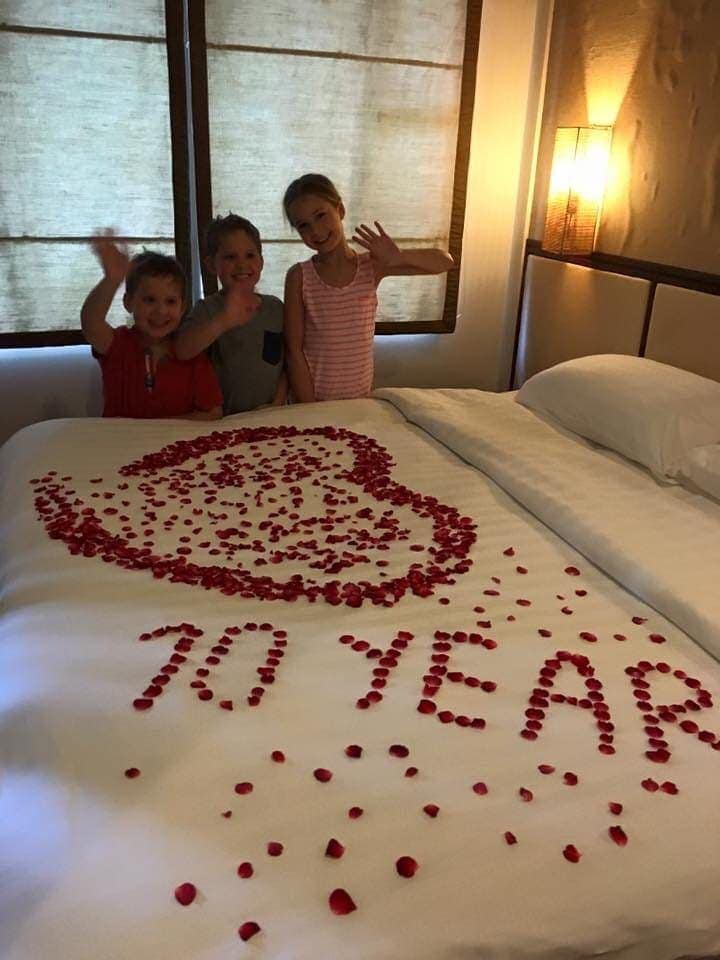 Our short flight to Koh Samui with Kids was great apart from an Air steward laughing that we hadn’t arrived at final destination yet and everybody was ill!. It was only a short taxi ride to the hotel. The staff were really welcoming and we had some drinks and a fast check in to our 2 beach huts. Boys V Girls. This is the first time we have had separate rooms as previously have always gone for a small apartment or adjoining rooms but it worked well and was surprisingly peaceful. Lara did a little guided tour of the rooms which you may want to watch here.  A bit lived in!! The rooms were beautiful and really clean with lovely bath products. The electrics were a little variable and there was a lot of parental anxiety around dripping wet kids being near dodgy plugs and extension leads.The hotel was on a busy road but set back enough to be very quiet with a lovely manageable pool and close to the beach. We had a great breakfast in the hotel every day and had lunch form the boat venders on the beach. For dinner there were a lot of local cafes and the Fishermans village was a short walk away with a larger variety of shops and restaurants. There was a mini mart over the road where we stocked up on the local beer and my drink of choice for the trip , white wine called ‘Bin”! A few little moments including James having a huge nose bleed into swimming pool causing evacuation, Craig losing my favourite bag plus scarf. I broke wine glass on beach after being told not to take glass onto beach as it was clearly very dangerous. And Craig was left in charge of boys for one hour. Both got sunburnt ( his children don’t burn, except when HE is left in charge. ) 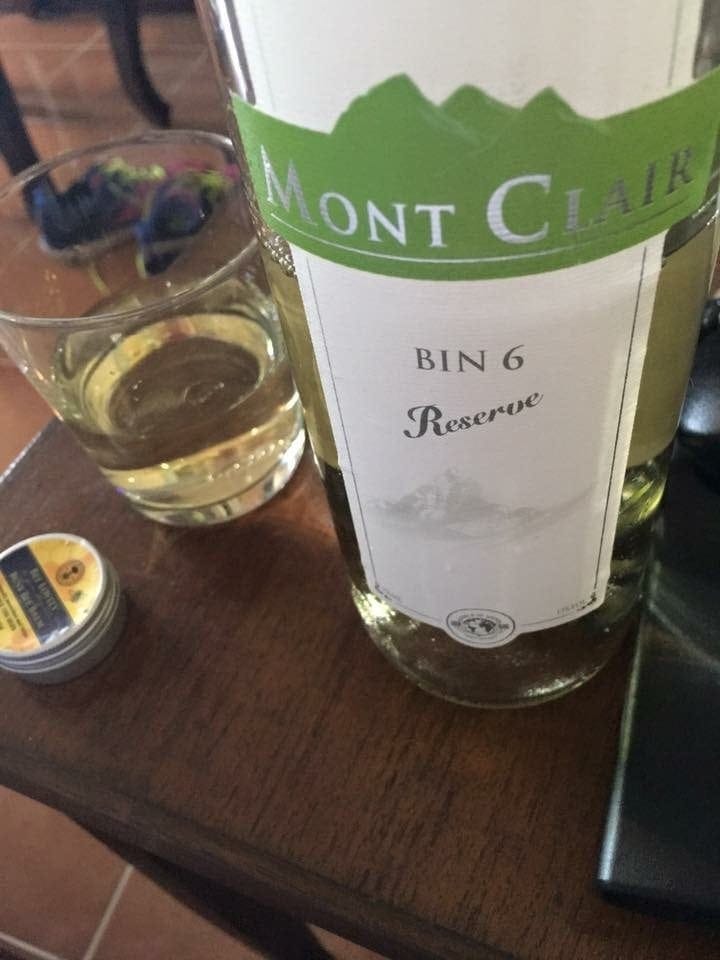 Although we would have liked to go on some boat trips in Koh Samui with Kids they were less keen. We had an especially traumatic boat trip to see dolphins in Tenerife resulting in lots of vomiting, and since then all have been reluctant to get on any form of boat. Tantrums even had on the punts in Cambridge – not helped by the kids witnessing a Japanese tourist fall in the canal. We went to The Big Buddah, which the kids enjoyed but we found rather disappointing. There were a lot of hagglers and cheap shops selling overpriced tat which made me more irritable than usual. We did find a lovely little shop to stock up on joss sticks, managing to avoid buying the fireworks that I thought had nice packaging. Not sure that would have gone down so well at airport security. The Namuang waterfalls,  pretty, a fair amount of litter but the kids weren’t bothered and found it all very exciting. One of the highlights for me was the elephant rides, only a few weeks after a scotsman had died, I’m not sure if we went to to the same place! There were several places offering this experience and the animals appeared well cared for and there were even 2 babies! 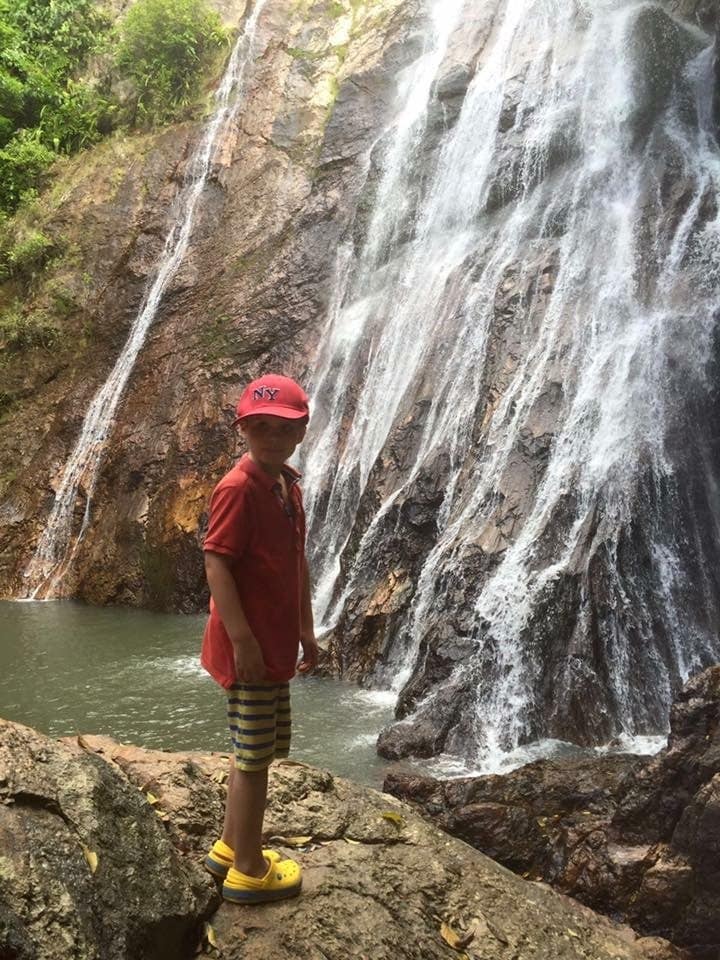 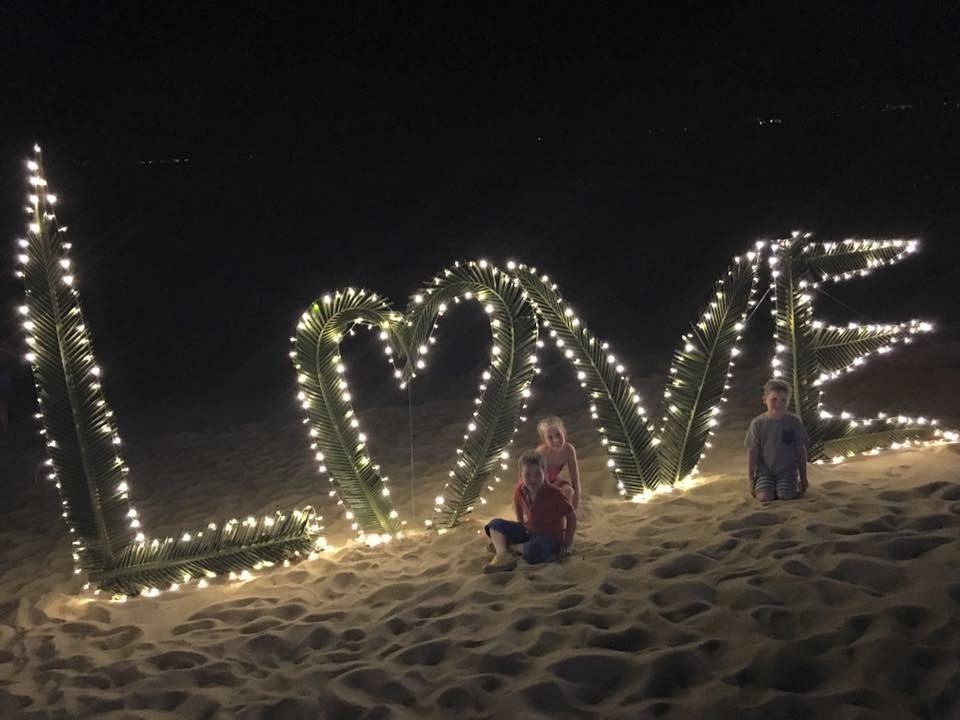 On valentines night we had a small barney as Craig refused to pay for the romantic meal deal on the beach. However the lighting was beautiful and the kids loved the decorations. The trip home was thirty hours door to door and a long way to go. The kids admitted they had a lovely time and the boys felt the best bits were the planes but did ask if next time we could go back to Lanzarote. Perhaps they were a little young to appreciate what Thailand has to offer or perhaps we were naive in thinking that kids need more than a pool in the sunshine. It was an adventure but we will probably stay closer to home for the next few years.

NB: Thanks to Ailsa for submitting this Guest Post about Koh Samui with Kids, all views are her own! Post created in collaboration with tempstonluxury.com