At October Half Term we were lucky enough to spend 6 nights in Cyprus, 3 nights at the Amathus Beach Hotel and 3 nights at the Four Seasons Cyprus, both based on the beach front just outside Limassol.

The Four Seasons Limassol is a five star deluxe hotel which prides itself on being at pinnacle of luxury & style, combining impeccable facilities with world class hospitality and service.

On the morning we left Amathus Beach Hotel we decided to head out to the Apeshia Hills Donkey Sanctuary before checking into the Four Seasons and you can see our review here.  Save to say the kids had a fabulous morning.

On arrival at the Four Seasons my first impressions were amazement.  The entrance lobby is designed to impress and impress it does. The staff were attentive and kind, and very apologetic that our rooms weren’t yet ready, despite us arriving way before the 4pm check in time.  Our luggage was swiftly taken away from us, drinks given and instructions on where to change so we could use the pool. The girls required this information within minutes of us arriving as they were desperate to dive in. 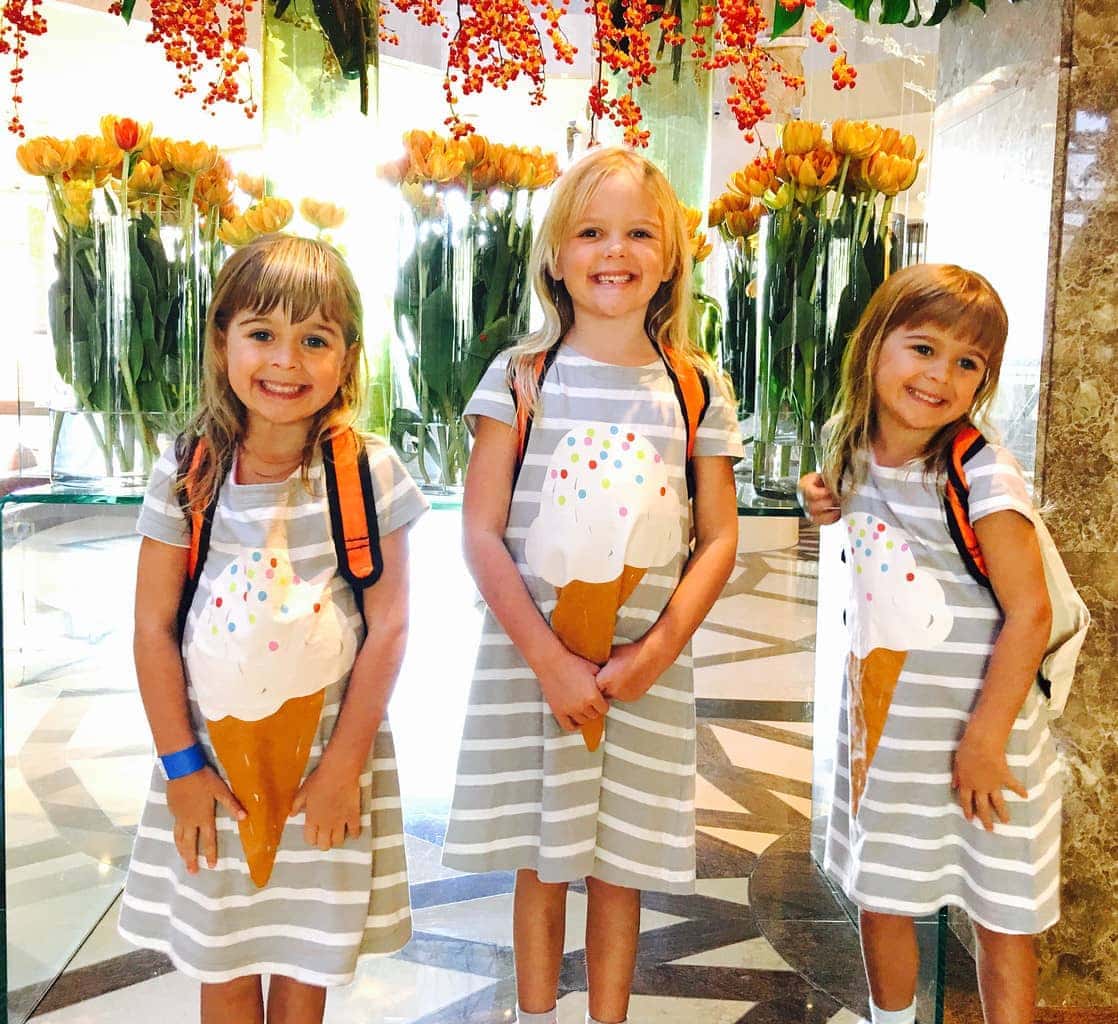 The large pool at the Four Seasons, with more sunbeds than you could count, was impressive. By 2pm in the afternoon it was pretty full around the side but the pool staff helped us find sunbeds and didn’t worry that we didn’t have a room number for towels as our name was on the list. I liked this attention to detail. 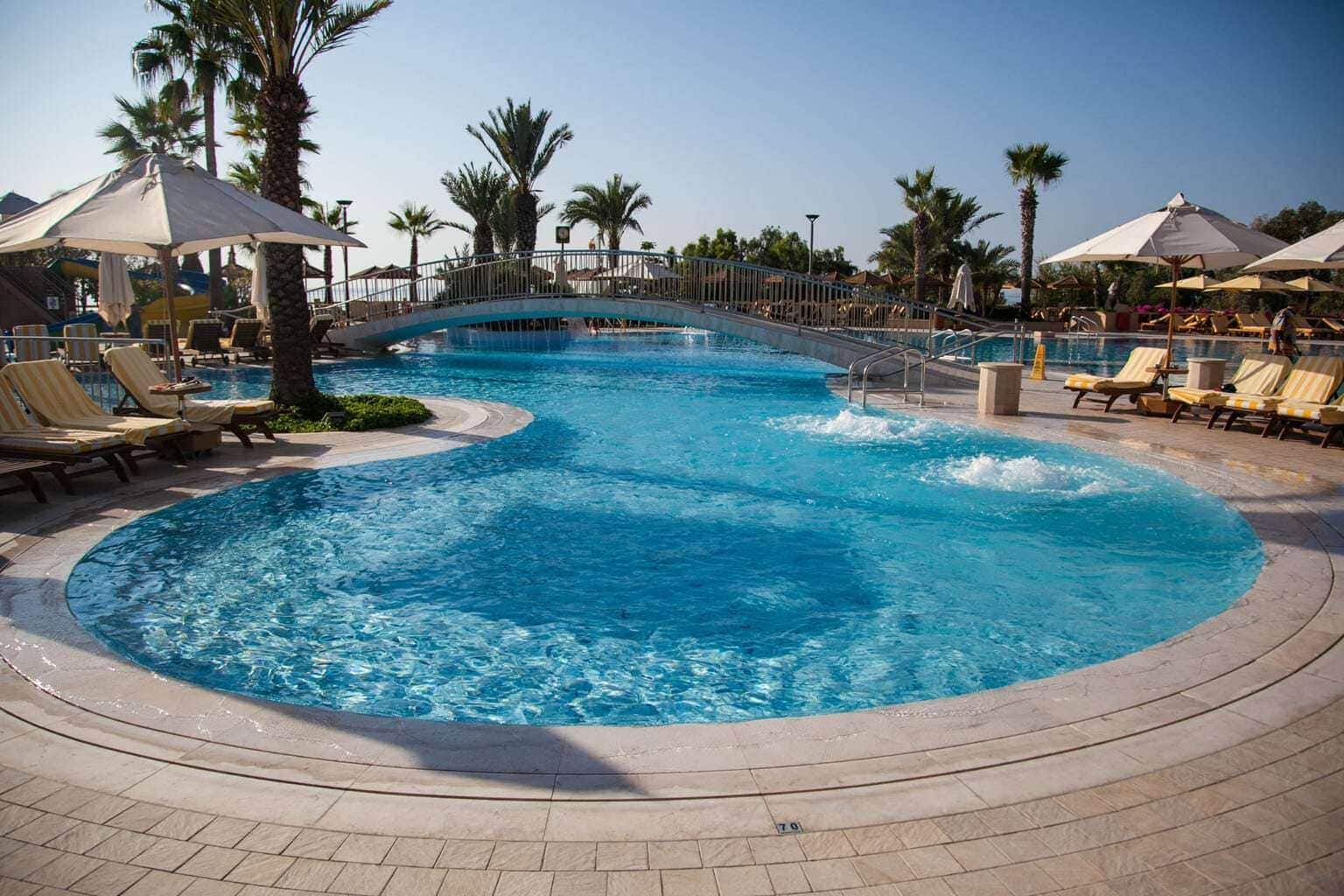 We spent the rest of the afternoon at the pool watching the girls play on the waterslide (this is a new hotel obsession) and jump into the pool countless times. The only reason they got out was because I saw a lady setting up at the side of the pool to do pottery painting which they really enjoyed. 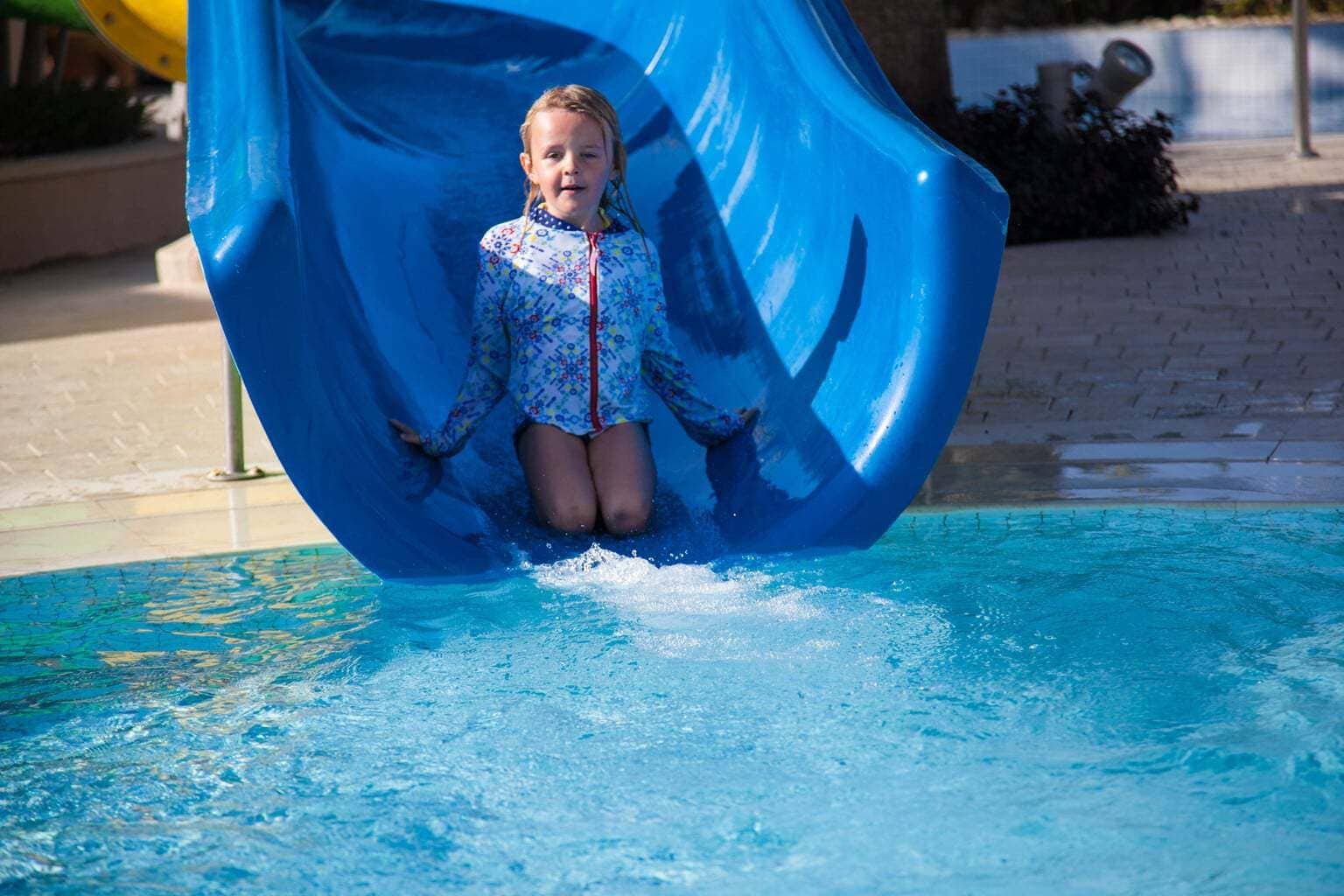 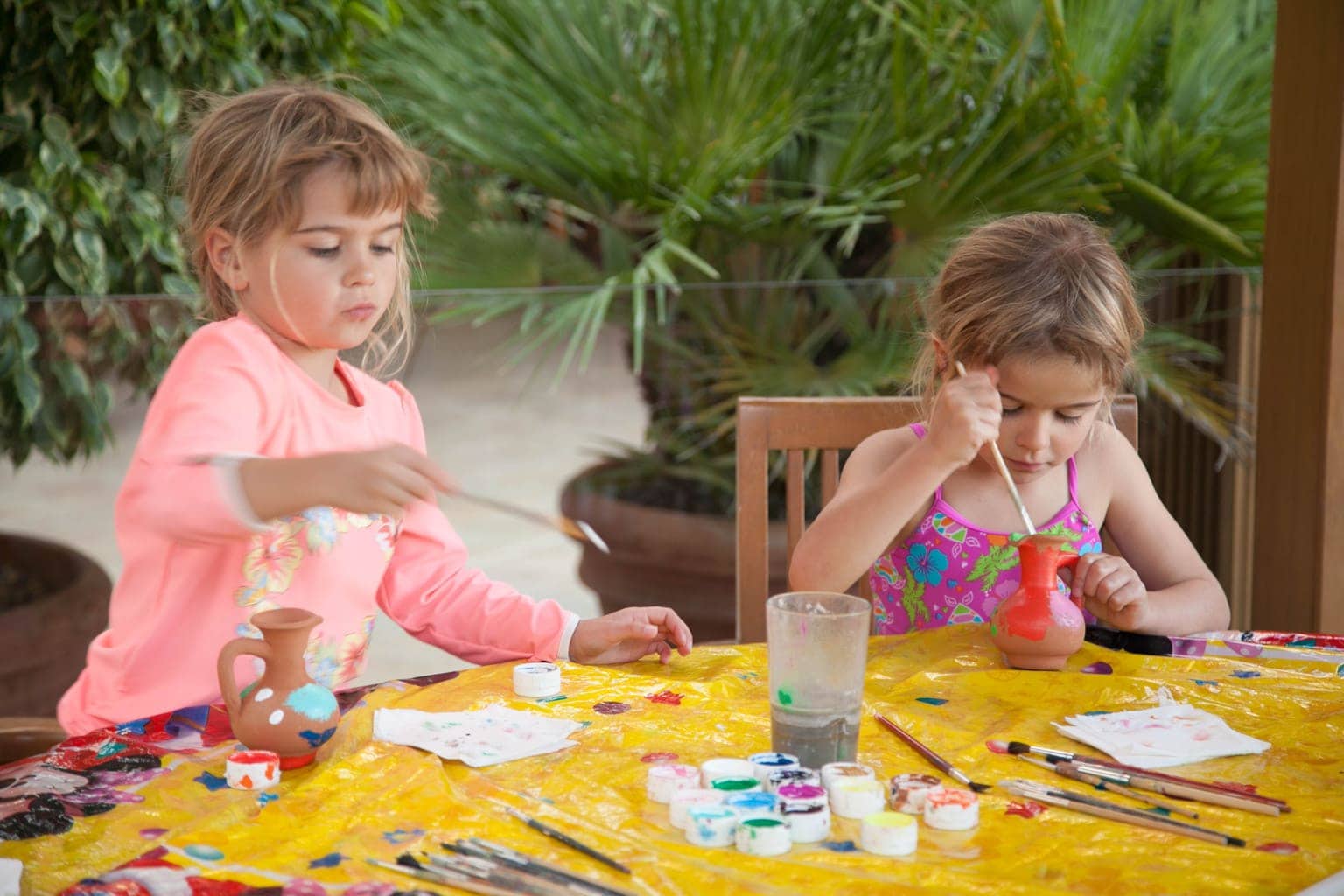 Having finished pottery painting they decided they wanted to see what the kids club was like. For me this is where I struggled with the Four Seasons for the age of my girls at 6 and 5. My girls love a good kids club, they enjoy the break from the sun and the chance to do a lot of craft.  They like the chance to dip in and out of the clubs when it suits them.

The issue I had was that the kids club at the Four Season is split into over 8’s and under 8’s.  The club for over 8’s is a drop in and out and the kids don’t need to be signed in or out which is fine for that age (although I do know some parents of 8 year olds who would think this is a bit young) and so if they are not 8 they can’t attend it unless there is space and you stay with them.  We tried three times to try it out and twice we were told there wasn’t room for the 5 year olds.  This is also the kids club they, and we would have liked them to attend.  It was outside, they did baking (below), beach front activities, scavenger hunts, candy making – a whole host of fantastic things.

The kids club for under 8’s was unfortunately however inside, in a room without any windows. It was a large room and it was decked out very nicely with bright colours and lovely staff but I really didn’t want the kids to have to spend time inside in a room without windows when we were on holiday in the sun, so for me this element of their offering to kids under 8, just didn’t work.  The plus side to the kids club was that it was open until 10pm, so one evening after an early tea for the kids at the bar, we dropped them off to watch a film and had dinner ourselves in peace, collecting them after we’d finished to join us in the Greek dancing. 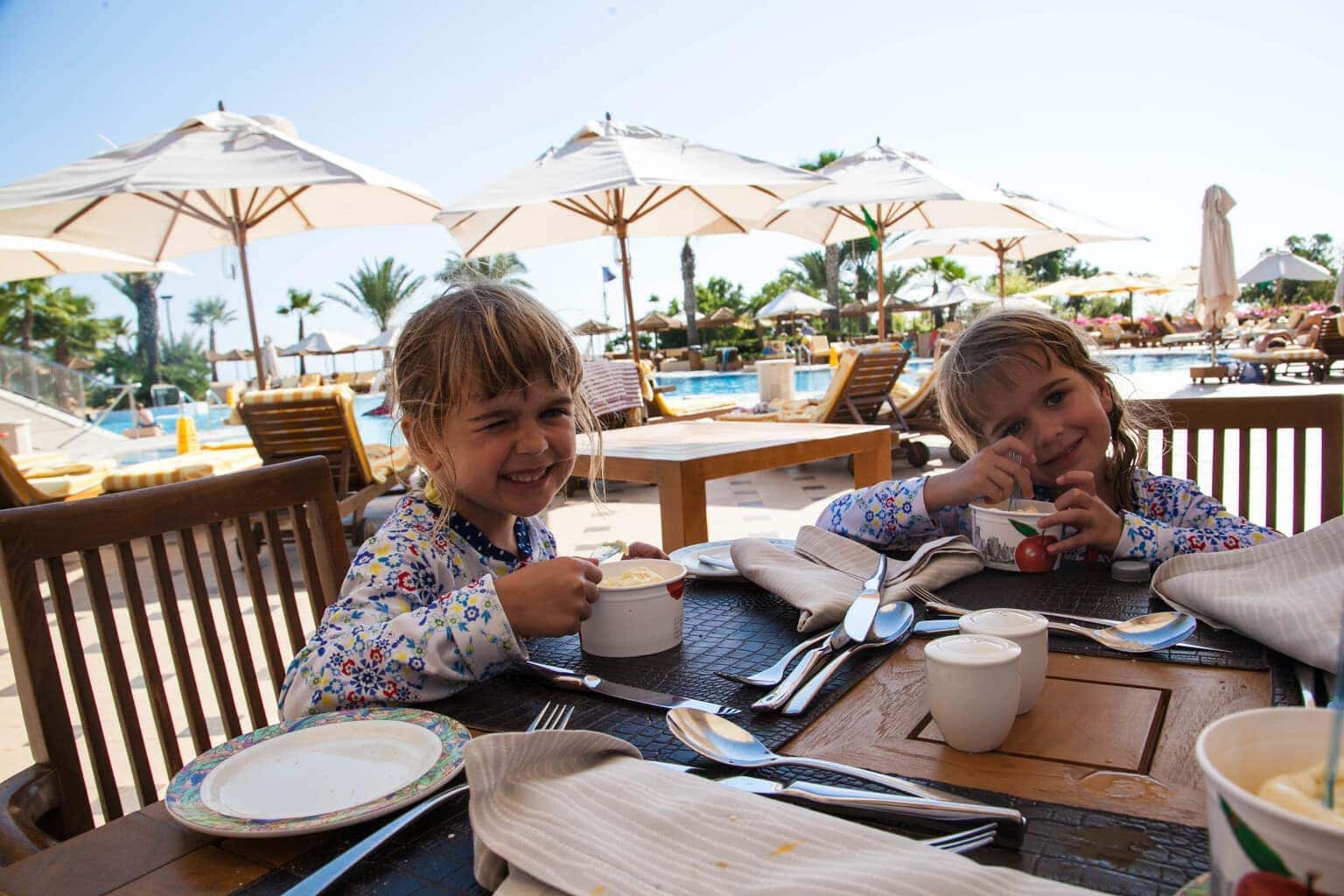 After our afternoon in the pool that first day, we made our way up to the rooms. We had interconnecting rooms at the back of the hotel and the rooms very much had a wow factor. It took the porter who delivered the luggage at least ten minutes to tell us where all the extras were and show us how to use the touch panels for lights and curtains. This was a real highlight  for the girls and they spent ‘quite’ a long time turning the lights on and off with the buttons on the tablet and closing and opening the curtains.  Save to say the tablet was removed from their room after lights out finally so they could actually go to sleep! 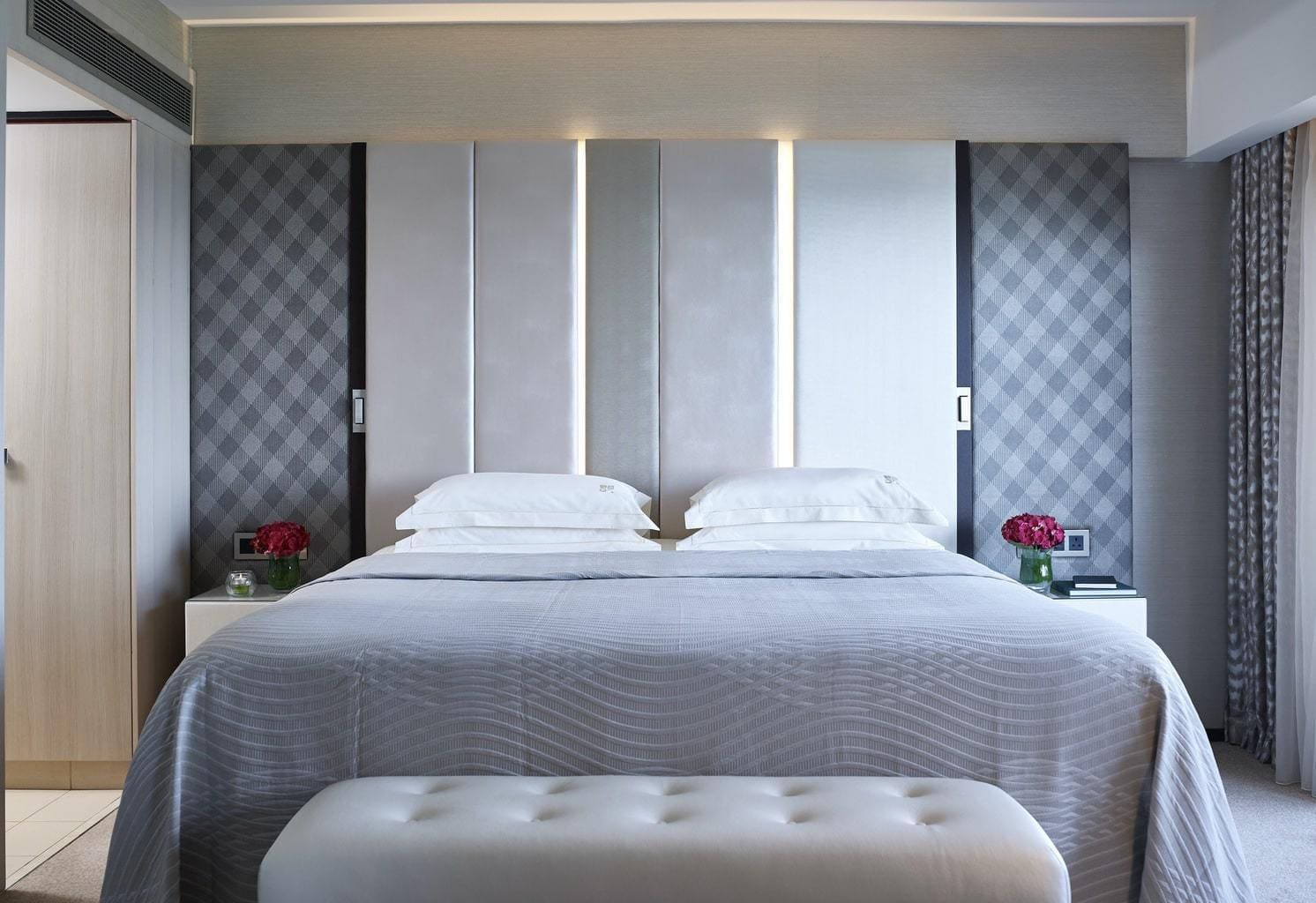 On the second morning we decided to wander down the beach front, past the Amathus Beach Hotel where we had stayed earlier in the week, to the Ancient City of Amathus.  We’d seen reference to this site in the ‘Moments’ book that the Four Seasons publish every week with their activities in and whilst we didn’t feel brave enough to take the kids on the advertised tour that left the hotel at 9am, we did want to take them ourselves. The walk took literally 15 minutes from the hotel and was well worth the trip. Snacks and drinks packed to bribe the kids up the hill was obligatory but it was definitely worth the hike up the hill to see the city which archaeologists tell us existed from the earliest Iron Age, circa. 1100 BC. 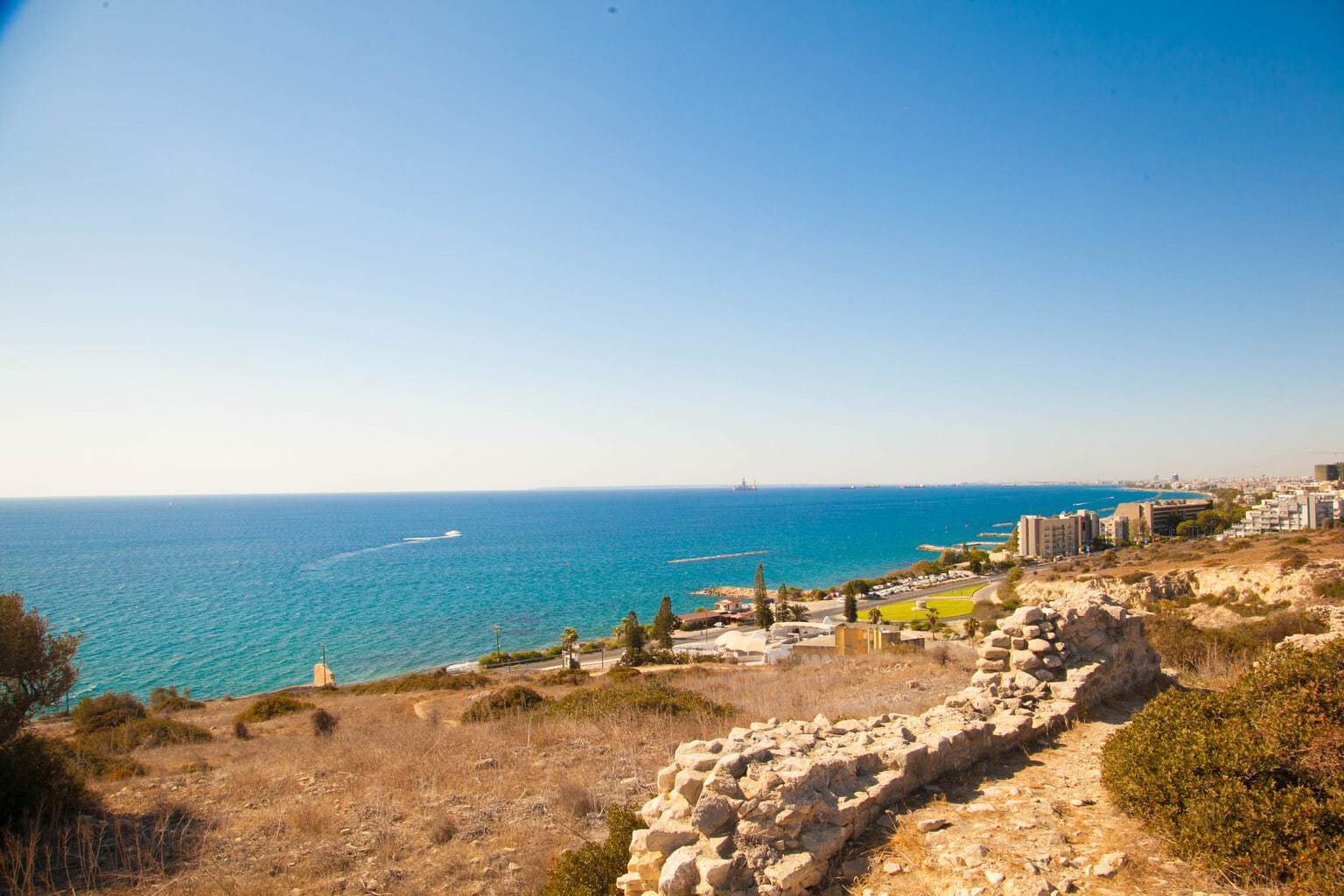 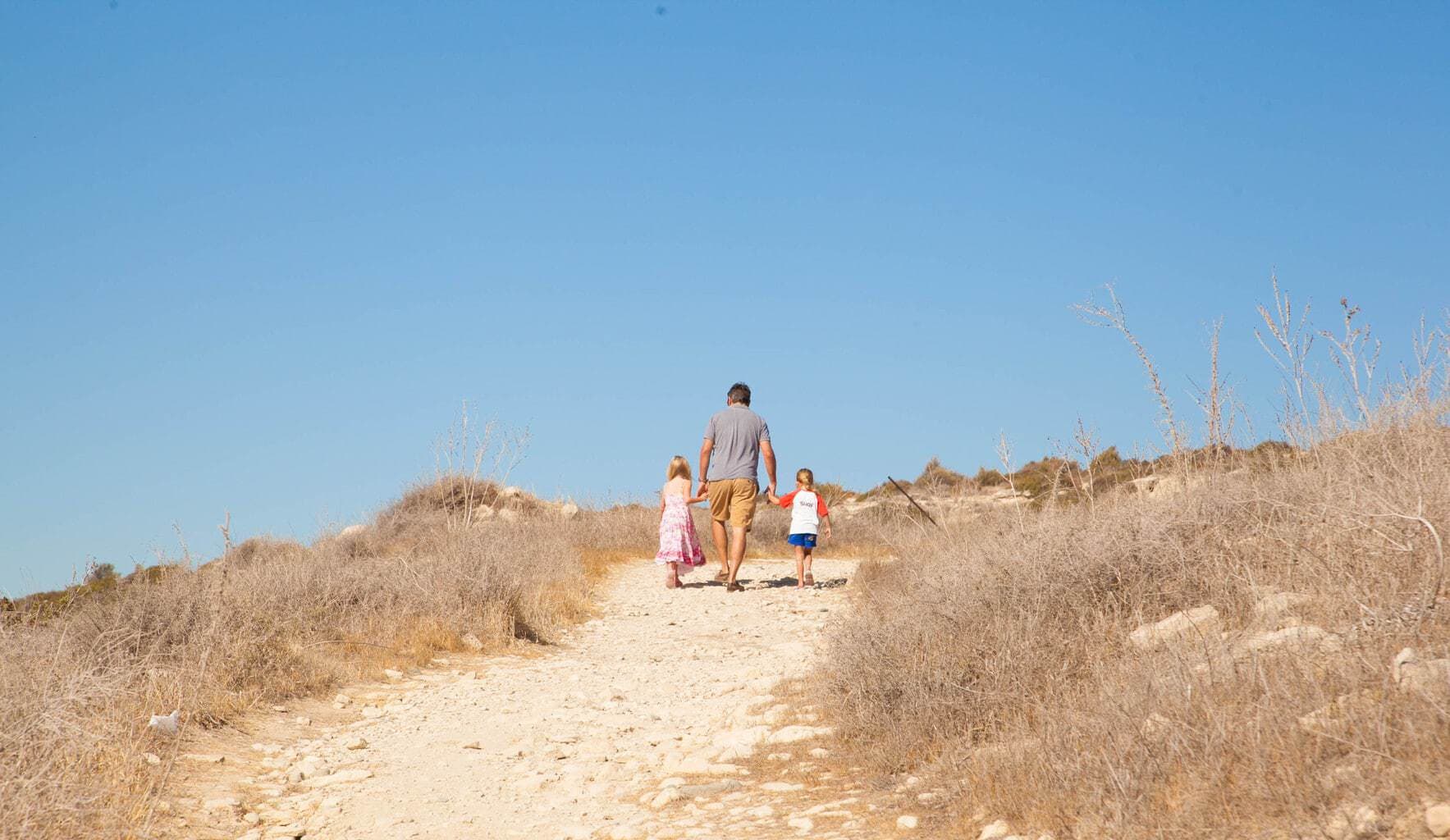 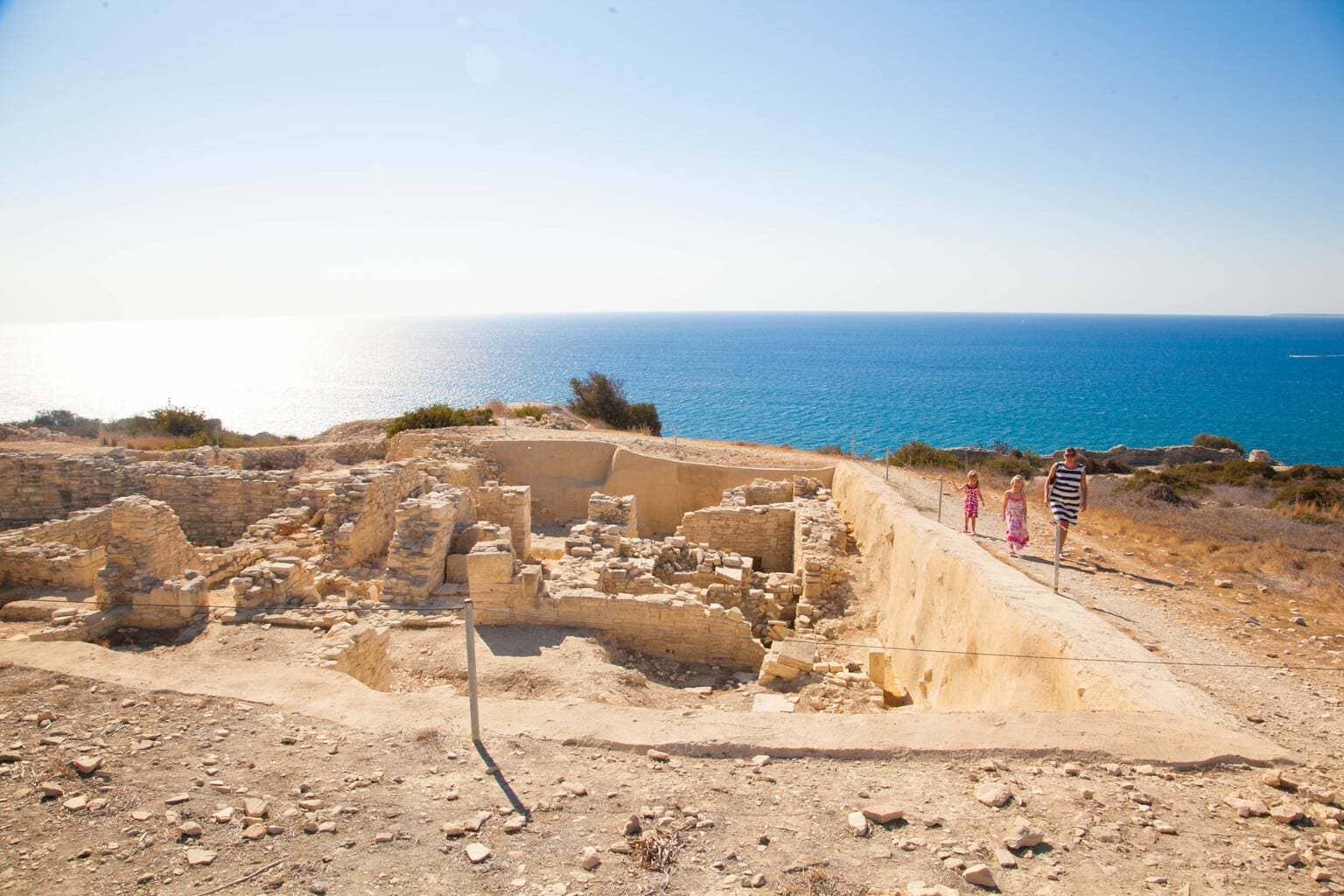 On the wander back we took a little more time and found an empty beach strip for a potter in the sea.  The hotels in Limassol have mainly bought up the beach areas on this strip (and both the Amathus and Four Seasons have their own) but it was nice to sit for a while on an empty part of the beach and watch the kids splash about. 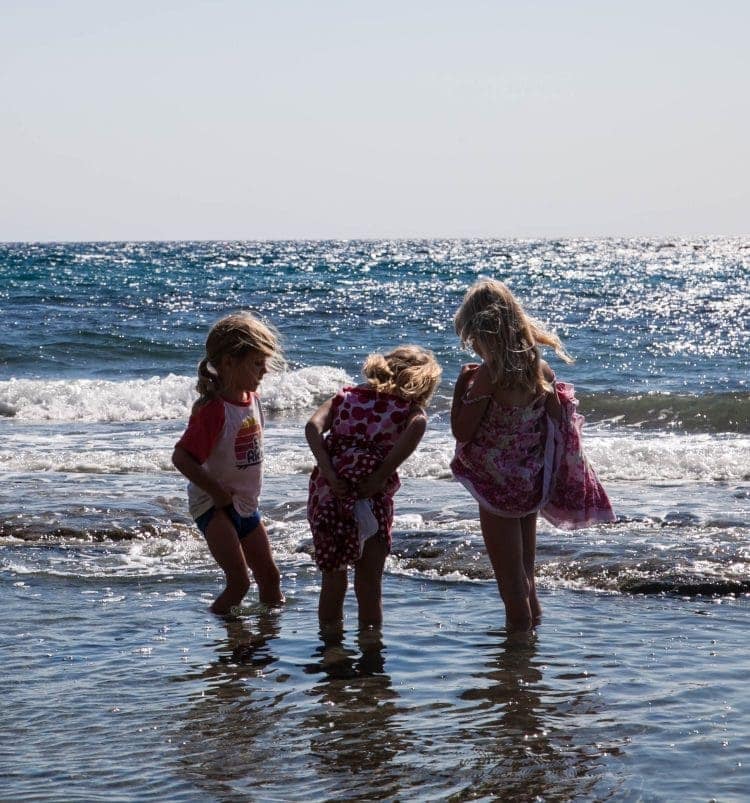 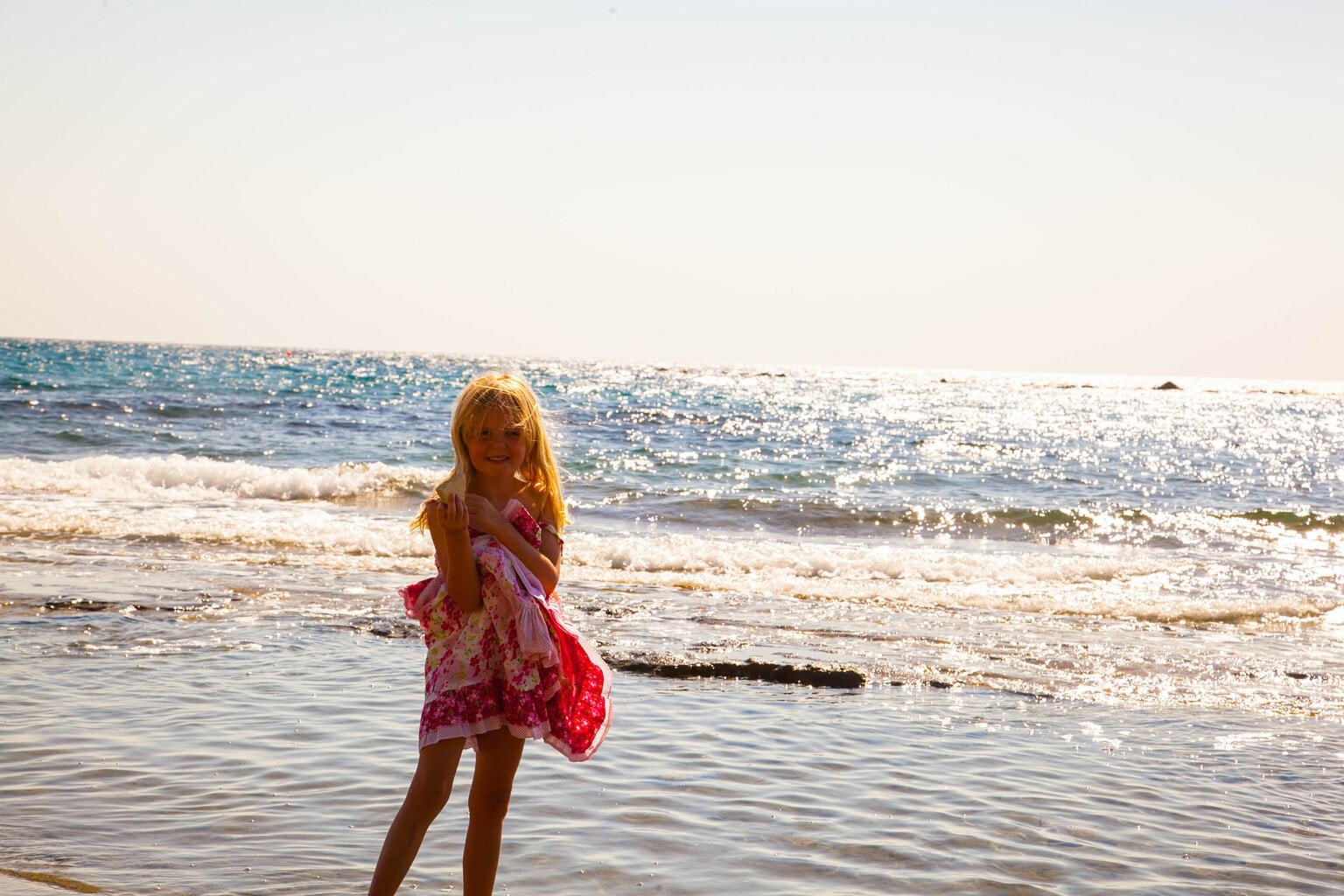 Our afternoon followed the same pattern as the day before. Water slides, swimming, drinks, water slides, swimming drinks.  We also managed to squeeze them into cup cake baking in the over 8’s kids club which they were super excited by as you can tell by their faces! 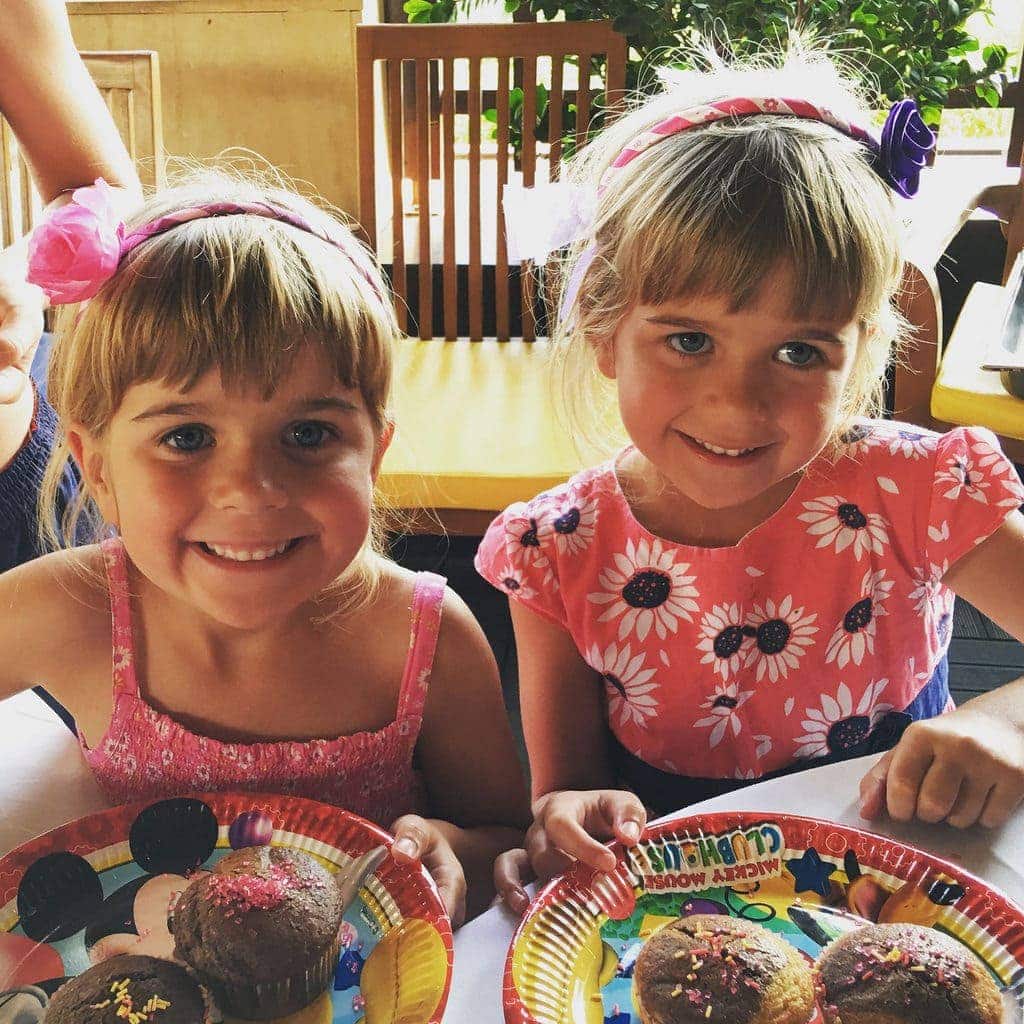 We decided to eat out of the hotel on the second evening and drove down into Limassol to a restaurant recommended by Visit Cyprus, Dasoudi, run by the very friendly Bambos.  Bambos actually invited us to order anything we liked off the menu  and was thrilled we had chosen to visit his restaurant as he told us less and less people are leaving their hotels when visiting Cyprus. Through out the evening little treats kept arriving at the table as they were actually cooking up a feast in the kitchen for a wedding so we got to taste all manner of different foods.  We left at the end of the evening completely and utterly full of delightful fresh Greek food. This restaurant (right on the beach) with a playground next door and an ice cream parlour is definitely recommended for families. 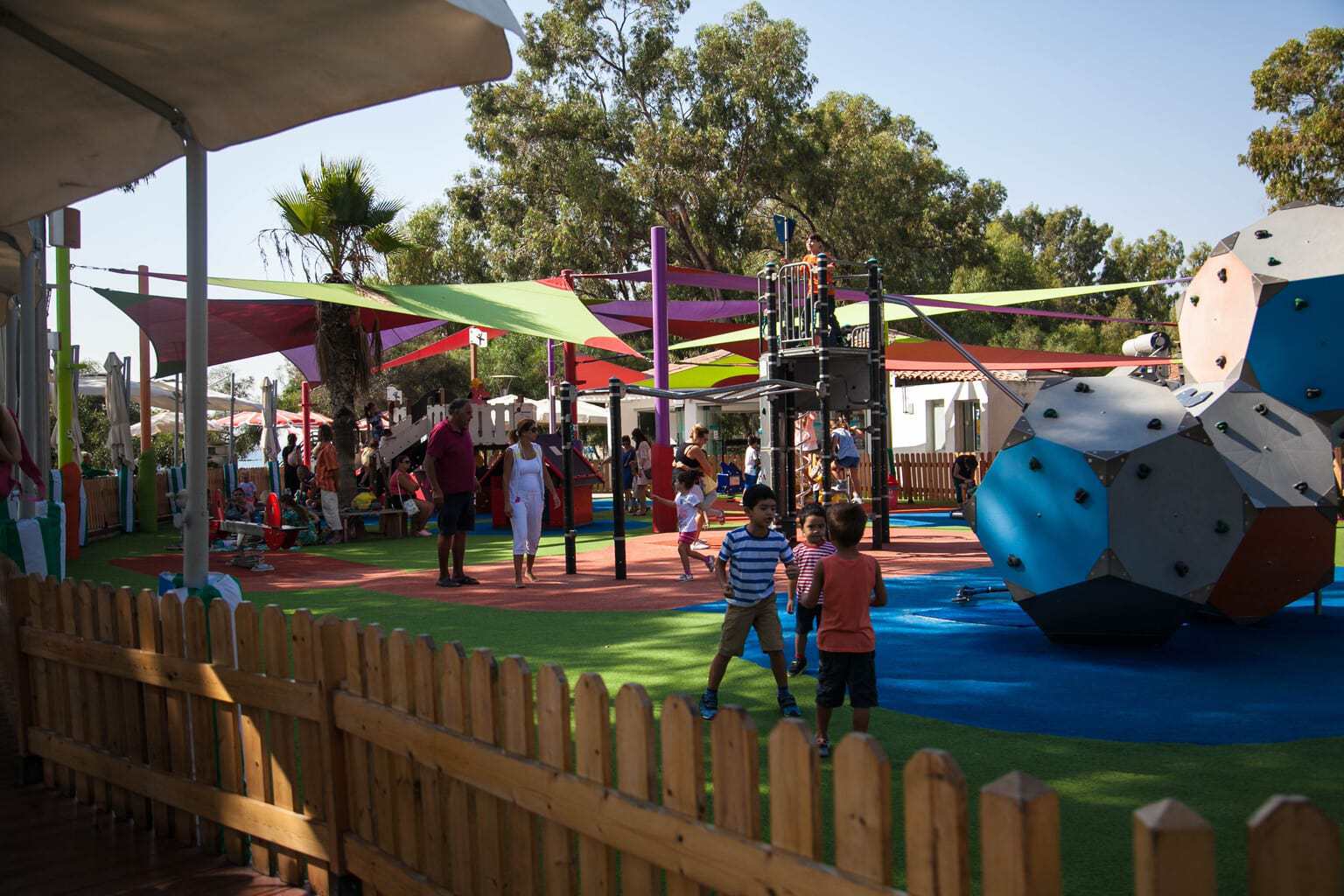 On our third day we decided to head off to the Fassouri Waterpark on the other side of Limassol. Having been to Disney earlier in the year and loved Typhoon Lagoon and Blizzard Beach we were a little concerned that the Cyprus waterpark with clearly a lot less cash than Disney just wouldn’t live up to our expectations of water parks.  However whilst it is fair to say that the theming of the waterpark was not in the same league, we actually felt that there was more actual waterslides at the Fassouri park and we had a ball. A particular favourite was the wet bubble and I loved climbing up it and splashing back in, as did our eldest.  You can see one of our water slide videos here! Taken with the My Doodles Action Camera.

The food options at the Four Seasons were varied and the restaurants all looked beautiful.  We only ate in Cafe Tropical due to time constraints, but the food was very good quality and it was a really lovely sitting out by the pool with beautiful lighting.  The breakfast buffet was also served in the same restaurant.  The only slight issue for my little ones is that they couldn’t actually reach any of the food at the buffet as is all served on high tables.  Not an issue for anyone with older kids but for anyone with children 5/6/7 who like to serve themselves and feel grown up/changing their mind about what they want to eat 4 times during each breakfast it is a little frustrating and means we had to keep getting up to assist. It is the small things that can make or break a breakfast!

On our last day we really appreciated our late check out at 12pm as it meant we had time to play in the pool that morning and then use our own rooms to get changed for the airport. 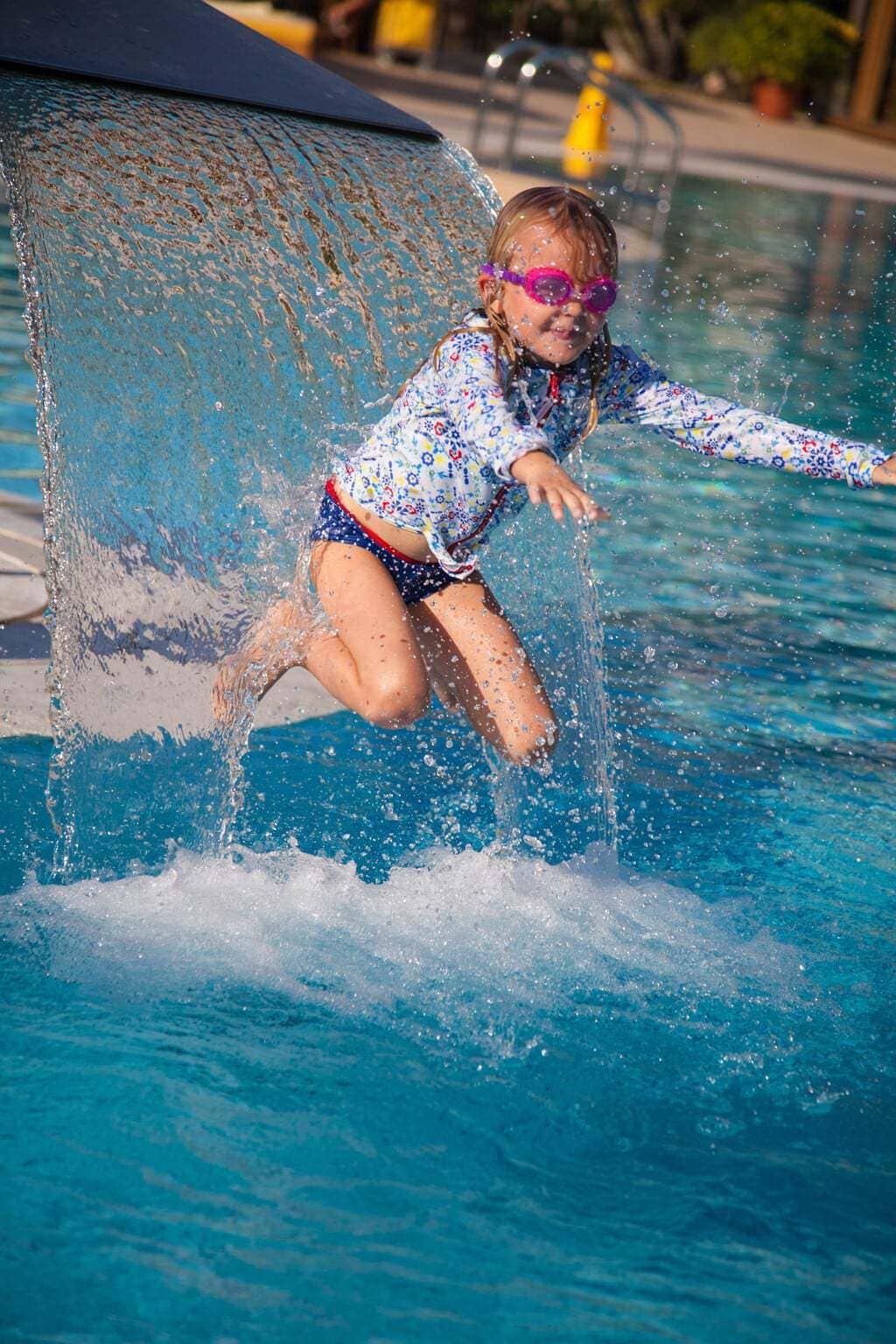 Driving our hire car back to the airport and being greeted by the very friendly Manos Car (excellent service definitely use them!) we told him we had had a wonderful week in Cyprus and would be back.  We meant it. Cyprus is a fantastic place for an October Half Term break for sun and relaxation not too far from home, and there aren’t many nicer hotels on the Island than Amathus Beach Hotel or the Four Seasons.

Why not PIN this for later! 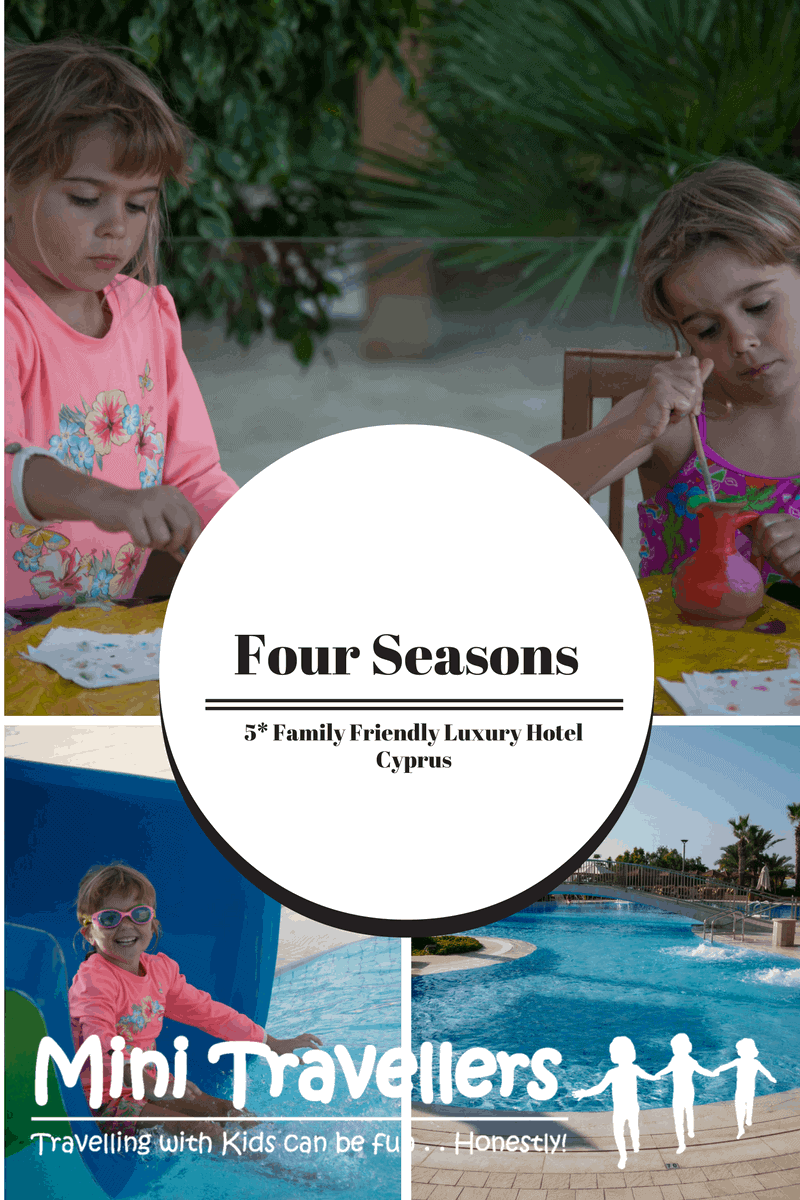 NB: We received complimentary accommodation at both the Amathus Beach Hotel and the Four Seasons Cyprus but all views and opinions are my own.

The hotel does look impressive, exactly what I would go for and the pool looks so amazing, this would be perfect for the boys x

Looks nice, and like you had a good time :) #mondayescapes

Four Seasons are one of my favourite hotel chains and after reading your post the Four Seasons Limassol has been added to our to-do list. The pool which is always a popular option with my girls looks fantastic there as does the rooms which look stunning.

I went to Cyprus as a teen and remember the temperatures being beautiful in sping so I imagine they were similar for you. Wonderful, like you say with it being so close to the UK. The Four Seasons sounds lovely but I think we'd have the same minor issues as you. I'd be happy using the kids club for under eights in the evenings but not so much during the day. Fantastic pool photos! #MondayEscapes

These are the kind of places I used to love when my teenagers were younger and now that they are older I value the role they used to play in keeping them entertained whilst we relaxed. I have heard a lot about this resort from friends with younger children and it seems from you say it ticks a lot of boxes. #MondayEscapes