Over Easter, we took our two little ones to see Ben & Holly at the Floral Pavillion in New Brighton. We have an almost 3 year old, who was very excited, not quite understanding what to expect and an almost 5 year old, who has never seen it before, because as a young toddler she was petrified of any costumes and particularly the idea of Ben & Holly on stage as the costumes have rather large paper-mache heads (think Frank Sidebottom!)

They both love the TV series, (as do we) and we have spent the last few years taking our eldest to the theatre to help her face her fears, and she is now much more comfortable with the idea of stage and costumes, so we had high hopes for this production. 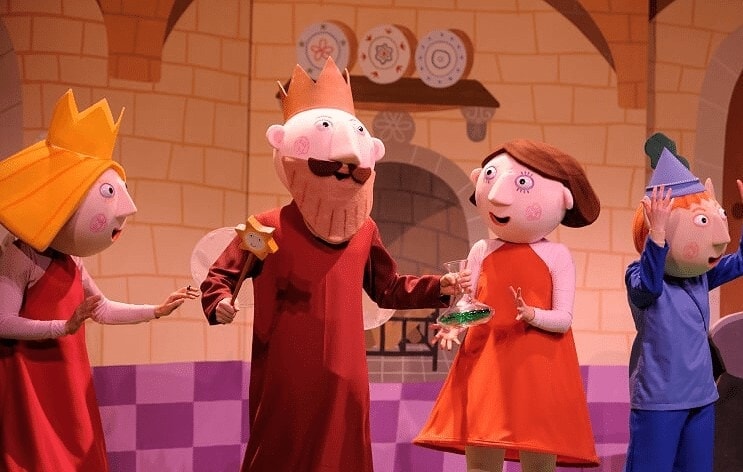 I love the Floral Pavillion.  It’s small enough to create an intimate, personal theatre experience and really well designed for kids, as the seats seem to be steeply inclined helping them see over grown-ups’ heads! The staff as always were really helpful and welcoming to us as a family, which ‘set the scene’ for a good afternoon.

The play itself was extremely well produced. The storylines were entertaining and complicated enough to keep the grown-ups and older children interested, but simple enough for the younger members of the audience be able to follow.

The character voices were excellent and true to the TV series, although Ben was, of course played by a woman (as his voice hasn’t yet broken) and it was a little distracting that he had a bust! I also found his voice slightly over-dramatized and a bit annoying.

When there were a lot of characters on stage, despite the actors making every effort to use large, physical gestures, it was sometimes difficult to tell who was speaking, because their ‘heads’ weren’t animated.

My favourite scene was the last before the interval, when Ben, Holly & Nanny Plum fly to Lucy’s house to collect her tooth – it was magical. They exited the stage and the lights dimmed. Against a black curtain, small puppets of the characters appeared, lit by spotlights, as if to be flying through the night sky, to the loveliest piece of music. My eldest seemed to bring me back to earth when she whispered “Mummy, I think I can see people dressed in black… are they holding little Ben & Holly on long sticks?” 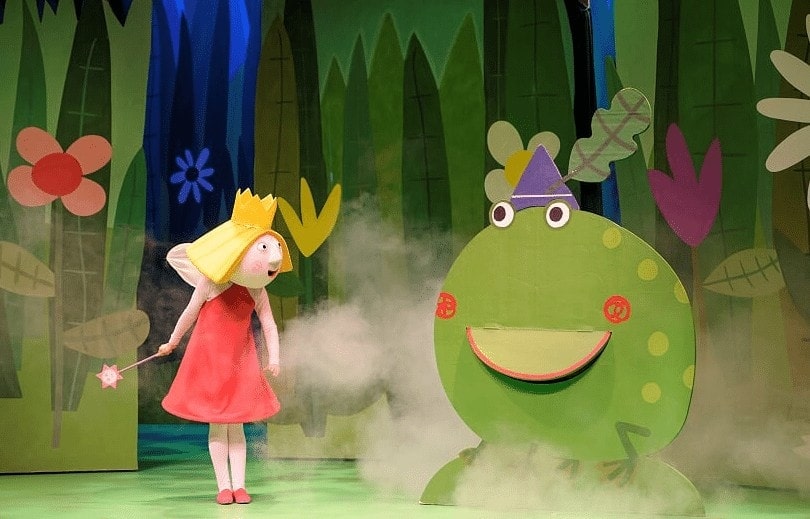 The special effects and props were simple but effectively staged, for example the large red sheet they used for Lucy’s bed that was cleverly later transformed to create the ‘jelly flood’!

My husband and I were slightly disappointed that The Wise Old Elf didn’t have a larger role in this production as the banter between him and Nanny Plum provides the most comedy in the TV series…but having said that, the kids didn’t seem too worried about that!

NB: Mini Travellers received complimentary tickets in order to review but all views and opinions are my own.